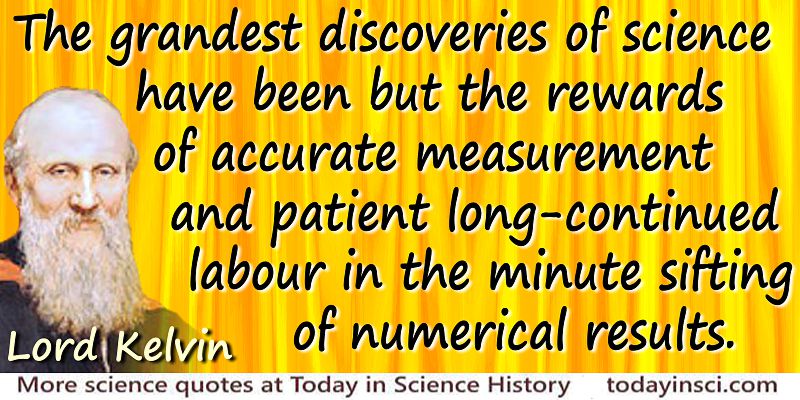 “The grandest discoveries of science have been but the rewards of accurate measurement and patient long-continued labour in the minute sifting of numerical results.”
— William Thomson Kelvin
From lecture at Institution of Civil Engineers (1883).

On 2 Aug 1871, as President of the British Association for the Advancement of Science, Lord Kelvin addressed the society General Meeting in Edinburgh, Scotland. The Association was then forty years old, and Kelvin began with a historical retrospective of its founding, and the scientists involved with the organisation. He eulogized Sir John Herschel who had died earlier that year and reviewed his accomplishments. Then he summarized the progress of science around the country, during which he remarked:

“Accurate and minute measurement seems to the non-scientific imagination, a less lofty and dignified work than looking for something new. But nearly all the grandest discoveries of science have been but the rewards of accurate measurement and patient long-continued labour in the minute sifting of numerical results.”

To illustrate his point, he continued:

“The popular idea of Newton’s grandest discovery is that the theory of gravitation flashed into his mind, and so the discovery was made. It was by a long train of mathematical calculation, founded on results accumulated through prodigious toil of practical astronomers, that Newton first demonstrated the forces urging the planets towards the Sun, determined the magnitudes of those forces, and discovered that a force following the same law of variation with distance urges the Moon towards the Earth. Then first, we may suppose, came to him the idea of the universality of gravitation; but when he attempted to compare the magnitude of the force on the Moon with the magnitude of the force of gravitation of a heavy body of equal mass at the earth’s surface, he did not find the agreement which the law he was discovering required. Not for years after would he publish his discovery as made. It is recounted that, being present at a meeting of the Royal Society, he heard a paper read, describing geodesic measurement by Picard which led to a serious correction of the previously accepted estimate of the Earth’s radius. This was what Newton required. He went home with the result, and commenced his calculations, but felt so much agitated that he handed over the arithmetical work to a friend: then (and not when, sitting in a garden, he saw an apple fall) did he ascertain that gravitation keeps the Moon in her orbit.”

Kelvin noted the meticulous work of other scientists, including:

“Faraday’s discovery of specific inductive capacity, which inaugurated the new philosophy, tending to discard action at a distance, was the result of minute and accurate measurement of electric forces.

Joule’s discovery of thermo-dynamic law through the regions of electro-chemistry, electro-magnetism, and elasticity of gases was based on a delicacy of thermometry which seemed simply impossible to some of the most distinguished chemists of tho day.

Andrews’ discovery of tho continuity between the gaseous and liquid states was worked out by many years of laborious and minute measurement of phenomena scarcely sensible to the naked eye.”