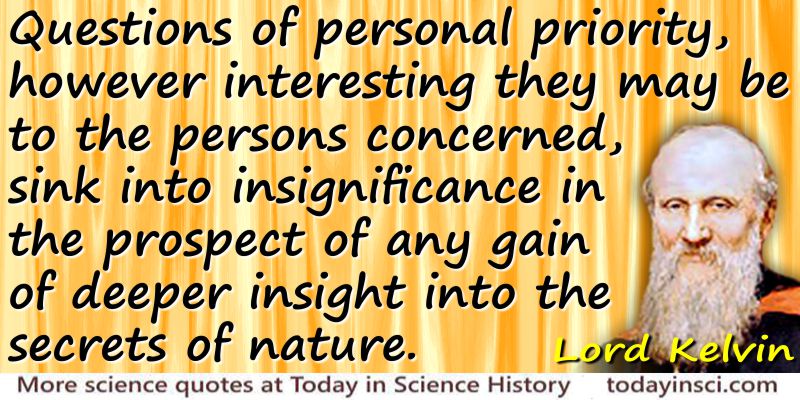 “Questions of personal priority, however interesting they may be to the persons concerned, sink into insignificance in the prospect of any gain of deeper insight into the secrets of nature.”
— William Thomson Kelvin
As quoted in The Life of Lord Kelvin (1910).

On 2 Aug 1871, as President of the British Association for the Advancement of Science, Lord Kelvin addressed the society General Meeting in Edinburgh, Scotland.

When reviewing progress in the investigation of the atomic nature of matter, he noted how Loschmidt in Vienna and Stoney independently in England “showed how to deduce from Clausius and Maxwell’s kinetic theory of gases a superior limit to the number of atoms in a given measurable space.” Meanwhile Kelvin himself had addressed the same issue. He said about his work that “I was unfortunately quite unaware of what Loschmidt and Stoney had done when I made a similar estimate on the same foundation, and communicated it to ‘Nature’ in an article on ‘The Size of Atoms.’” He continued:

“But questions of personal priority, however interesting they may be to the persons concerned, sink into insignificance in the prospect of any gain of deeper insight into the secrets of nature.”

In this case, he saw the multiple workers’ agreement as a good thing, saying next, “The triple coincidence of independent reasoning in this case is valuable as confirmation of a conclusion violently contravening ideas and opinions which had been almost universally held regarding the dimensions of the molecular structure of matter.”