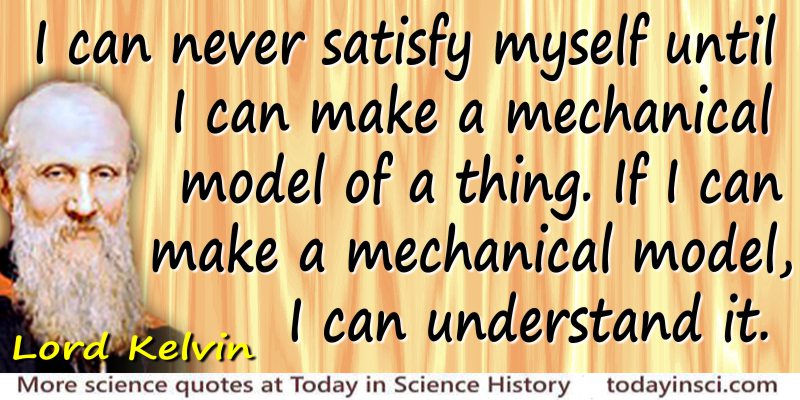 In 1884, Lord Kelvin was invited to give a series of lectures of Johns Hopkins University in Baltimore in the United States. This quote comes from Lecture 20. A stenographic report was made of it by A.S. Hathaway, a Fellow in mathematics there. The words may not be a verbatim version of the words that Kelvin actually spoke (see footnote). Copies pf these notes were reproduced by the “papyrograph” process, and made available to the attendees after his lectures.

It was not until twenty years later that Kelvin published a printed version, Lord Kelvin’s Baltimore Lectures on Molecular Dynamics and the Wave Theory of Light, in 1904. This later book was editted, and the remark forming the quote was not included in the typeset version. The words as they were down set down in the original handwritten notes by Hathaway concerned Kelvin's misgivings about the electromagnetic theory developed by his contemporary, James Clerk Maxwell.

“I can never satisfy myself until I can make a mechanical model of a thing. If I can make a mechanical model I can understand it. As long as I cannot make a mechanical model all the way through I cannot understand, and that is why I cannot get* the electromagnetic theory. I firmly believe in an electromagnetic theory of light, and that when we understand electricity and magnetism and light we shall see them ail together as parts of the whole. But I want to understand light as well as I can, without introducing things that we understand even less of. That is why I take plain dynamics. I can get a model in plain dynamics; I cannot in electromagnetics. But so soon as we have rotators to take the part of magnets, and something imponderable to take the part of magnetism, and realise by experiment Maxwell’s beautiful ideas of electric displacements and so on, then we shall see electricity, magnetism, and light closely united and grounded in the same system.”

Kelvin’s belief in models from the view of the present day shows how he held too closely to his idea of the utility of mechanical models, trying to explain phenomena that need modern electromagnetic and quantum theories. For example, to pursue his “vortex” hypothesis of the atomic structure of matter, he experimented with smoke rings. He also tried various models for the hypothetical (but in fact non-existent) luminferous ether.

* Notice the word “get” in the context above is an Americanism. Kelvin might have been more likely to say “accept.” This is a clue that the words Hathaway has left us may not be verbatim, though the sense will be a fair expression of Kelvin’s thoughts on the matter.


Text by Webmaster, with quote from the original lecture notes as excerpted in Gerald Edward Brown, Selected Papers with Commentary, of Tony Hilton Royle Skyrme (1994), 119-120 & footnote on page 202. (source)