William Thomson Kelvin
“I have no satisfaction in formulas” 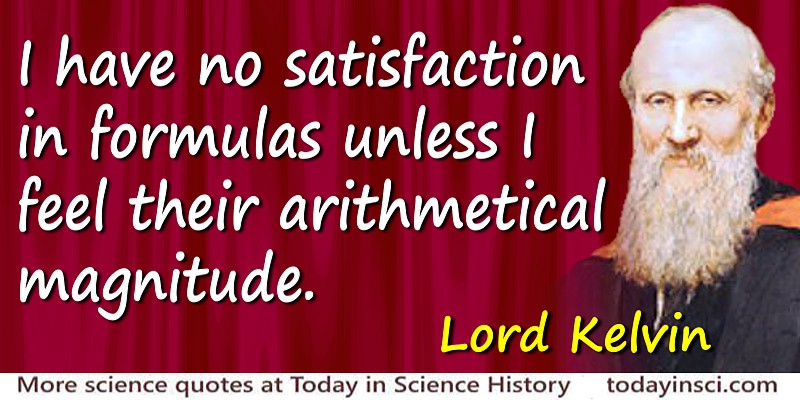 “I have no satisfaction in formulas unless I feel their arithmetical magnitude.”
— William Thomson Kelvin
From lecture at Johns Hopkins University, Baltimore (1884).

This quote comes from the seventh of the series of lectures Kelvin gave in the United States in 1884, at Johns Hopkins University, Baltimore, on topics concerning molecular dynamics and the wave theory of light. Specifically, in this lecture, Kelvin went through mathematical description, first on Lagrange’s analysis of the oscillation of a linear system for bodies connected in series and then he considered the propagation of disturbances in an elastic solid. He must have densely filled the chalkboard with equations which fill a number of pages in the printed record of his lectures.

At one point, having laid out a series of descriptive equations, he remarked how it was his habit to visualize the arithmetic results of any formulas he was investigating. In this case, without actually doing the numerous calculation, he realized the “exceeding rapidity of convergence of the formulas.” He explained in a passing remark:

“I have no satisfaction in formulas unless I feel their arithmetical magnitude—at all events when formulas are intended for definite dynamical or physical problems. So that if I do not exactly calculate the formulas, I would like to know how I could calculate them and express the order of the magnitudes concerned in them.”


Text by Webmaster, with quote and context from Lecture 7 (7 Oct 1884), collected in Baltimore Lectures on Molecular Dynamics and the Wave Theory of Light (1904), 76. (source)