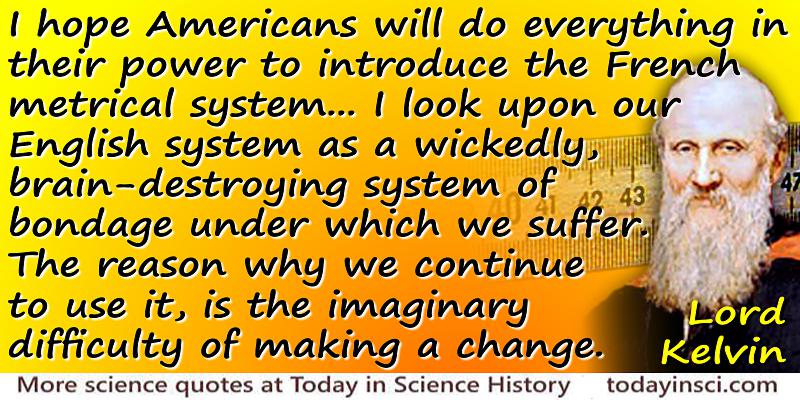 “I hope Americans will do everything in their power to introduce the French metrical system. … I look upon our English system as a wickedly, brain-destroying system of bondage under which we suffer.”
— William Thomson Kelvin
In Journal of the Franklin Institute (1884).

While Kelvin was in America giving lectures, he was invited by the Franklin Institute, and spoke in Philadelphia on the subject of “The Wave Theory of Light.” He began by apologizing that he had no demonstrations to rival previous lectures in that city on the subject of light by President Morton of the Stevens’ Institute and a series by Professor Tyndall. Kelvin was going to present mathematical and dynamical details of the theory of light.

While speaking on the wave nature of sound, and the pedal notes of an organ, he digressed with a remark on the relative simplicity of the French metric system of measurement.

“You, in this country [the USA], are subjected to the British insularity in weights and measures; you use the foot, inch and yard. I am obliged to use that system, but must apologize to you for doing so, because it is so inconvenient, and I hope Americans will do everything in their power to introduce the French metrical system. … I look upon our English system as a wickedly, brain-destroying system of bondage under which we suffer. The reason why we continue to use it, is the imaginary difficulty of making a change, and nothing else; but I do not think in America that any such difficulty should stand in the way of adopting so splendidly useful a reform.”

He complimented the school system in America, and said, “I hope the teaching of the metrical system will not be let slip in the American schools any more than the use of the globes.”


Text by Webmaster with quote from lecture delivered at the Academy of Music, Philadelphia, under the auspices of the Franklin Institute (29 Sep 1884)on The Wave Theory of Light collected in Baron William Thomson Kelvin, Popular Lectures and Addresses, Vol. 1, 304-305. (source)