William Thomson Kelvin
“Many of the greatest advances” 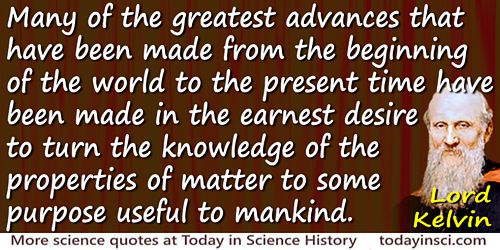 “Many of the greatest advances that have been made from the beginning of the world to the present time have been made in the earnest desire to turn the knowledge of the properties of matter to some purpose useful to mankind.”
— William Thomson Kelvin
From lecture at Institution of Civil Engineers (1883).

This quote comes from a lecture delivered at the Institute of Civil Engineers (3 May 1883), one of a series of six lectures on “The Practical Applications of Electricity.” In this lecture, he addressed the “first essential step” in physical science of learning the “principles of numerical reckoning and practical methods for measuring.”

“There cannot be a greater mistake than that of looking superciliously upon practical applications of science. The life and soul of science is its practical application, and just as the great advances in mathematics have been made through the desire of discovering the solution of problems which were of a highly practical kind in mathematical science, so in physical science many of the greatest advances that have been made from the beginning of the world to the present time have been made in the earnest desire to turn the knowledge of the properties of matter to some purpose useful to mankind.”

Lord Kelvin himself had been much involved in the evolution of electric science. He was concerned with, for example, the conductivity of copper, resistances of insulations and the electrostatic inductive capacities of submarine cables. He consulted on the problems associated with the design of the transatlantic telegraph cable, and measuring instruments needed to test its operation. Thus, he had these to introduce as examples of the progress in measurement made in electrical applications, and referred to the submarine cable with which he was familiar. He also discussed the introduction of the various units associated with electrical measurements.


Text by Webmaster with quote from 'Electrical Units of Measurement', a lecture delivered at the Institution of Civil Engineers, London (3 May 1883), collected in Popular Lectures and Addresses Vol. 1 (1891), 86-87. (source)