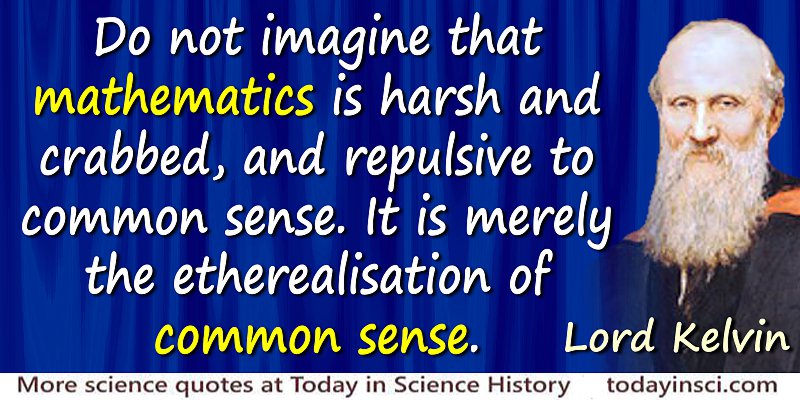 [[pic2]]“Do not imagine that mathematics is harsh and crabbed, and repulsive to common sense. It is merely the etherealisation of common sense.”
— William Thomson Kelvin
From address at Birmingham (1883).

In his Presidential Address to the Birmingham and Midland Institute, delivered in the Town Hall, Birmingham on 3 Oct 1883, Lord Kelvin spoke on his topic of “The Six Gateways of Knowledge.” He went on to develop answers to the question with which he opened his talk: “What are the means by which the human mind acquires knowledge of external matter?” His lecture title was a reflection of the how

“John Bunyan likens the human soul to a citadel on a hill, self-contained, having no means of communication with the outer world, except by five gates—Eye Gate, Ear Gate, Mouth Gate, Nose Gate, and Feel Gate. Bunyan clearly was in want of a word here. He uses ‘feel’ in the sense of ‘touch’; a designation which to this day is so commonly used, that I can scarcely accuse it of being incorrect. At the same time, the more correct and distinct designation undoubtedly is, the sense of touch.”

Kelvin designated six senses by dividing the sense of touch into two: a sense of roughness and a sense of heat.

Later in his talk, Kelvin referred to the important of graphical illustration, employed both in mathematical graphs of physical phenomena (such as the variation of air pressure with time representing sound) and in such realms as business.

“Do not imagine that mathematics is harsh and crabbed, and repulsive to common sense. It is merely the etherealisation of common sense.”

As an example, he said,


Text by Webmaster with quote from 'The Six Gateways of Knowledge', Presidential Address to the Birmingham and Midland Institute, Birmingham (3 Oct 1883), collected in Popular Lectures and Addresses (1891), Vol. 1, 280. (source)