William Thomson Kelvin
“Science is not antagonistic to religion” 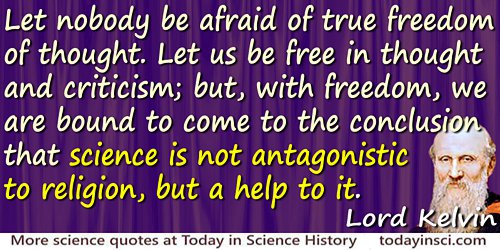 [[pic2]]“Let nobody be afraid of true freedom of thought. Let us be free in thought and criticism; but, with freedom, we are bound to come to the conclusion that science is not antagonistic to religion, but a help to it.”
— William Thomson Kelvin
As quoted in The Life of Lord Kelvin (1910).

Lord Kelvin was presiding at a lecture by Professor Henslow on “Present Day Rationalism,” before the University College Christian Association in London. When the speaker was closing his talk, he stated that modern science neither affirms nor denies creative power in the origin of life. According to an account in the magazine The Dolphin (Jul 1903), to this Kelvin

‘replied with some warmth that science does and must positively affirm creative power since biology makes every one feel the miracle of life in himself.

He said that modern biologists are coming once more to complete acceptance of a vital principle as the source of vital phenomena. He asked:

“Is there anything so absurd as to believe that a number of atoms falling together of their own accord can by any chance make a sprig of moss, a microbe or a living animal? Nobody can think that any such process even in millions and millions of years could unaided give us a beautiful world like ours?”

“Let nobody be afraid of true freedom of thought. Let us be free in thought and criticism, but with freedom we are bound to come to the conclusion that science is not antagonistic, but is a help to religion."

Lord Kelvin closed his brief but weighty confession of faith with this striking passage:

One of Lord Kelvin's expressions is,

“Every action of the human free-will is a miracle to physical, and chemical, and mathematical science.” ’

Webmaster has not been able to identify which newspaper may have been the primary source of the quote, but it is confirmed by a narrative version of Kelvin's statements that appeared in the New York Times (14 May 1903).1  Kelvin’s remarks continued to be quoted in various religious publications2 in the following two decades.


First and last paragraphs by Webmaster, with all the other paragraphs reproduced as written in 'Recent Science Notes: Lord Kelvin and the Argument from Design', The Dolphin (Jul 1903), 4, 80. (source)