As was the case for Nobel's own invention of dynamite, the uses that are made of increased knowledge can serve both beneficial and potentially harmful ends. Increased knowledge clearly implies increased responsibility. We reject the notion advocated in some quarters that man should stop eating from the tree of knowledge, as if that were humanly possible.

Dr Ian G. MacDonald, a Los Angeles surgeon who smokes (but doesn't inhale), contends that For the majority of people, the use of tobacco has a beneficial effect, far better for you than taking tranquilizers.

Quoted in Newsweek (18 Nov 1969), 62, Pt. 2, 66. A misguided comment, often seen as the shortened quote For the majority ... beneficial effect in a list of regrettable remarks, without the fuller context of the quote given here. MacDonald was quoted in the article to be an example that physicians were not unanimous in their attitudes against smoking. The quote is an opinion expressed to the reporter; it was not the result of scholarly research.

Engineers participate in the activities which make the resources of nature available in a form beneficial to man and provide systems which will perform optimally and economically. 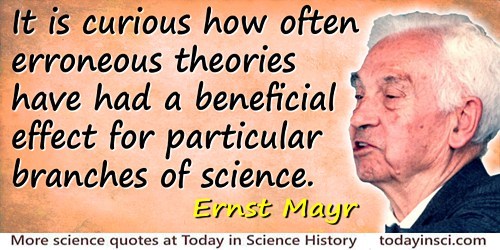 It is curious how often erroneous theories have had a beneficial effect for particular branches of science.

The Growth of Biological Thought: Diversity, Evolution and Inheritance (1982), 847.

It is usually not recognized that for every injurious or parasitic microbe there are dozens of beneficial ones. Without the latter, there would be no bread to eat nor wine to drink, no fertile soils and no potable waters, no clothing and no sanitation. One can visualize no form of higher life without the existence of the microbes. They are the universal scavengers. They keep in constant circulation the chemical elements which are so essential to the continuation of plant and animal life.

It was a great step in science when men became convinced that, in order to understand the nature of things, they must begin by asking, not whether a thing is good or bad, noxious or beneficial, but of what kind it is? And how much is there of it? Quality and Quantity were then first recognised as the primary features to be observed in scientific inquiry.

The law of diminishing returns means that even the most beneficial principle will become harmful if carried far enough.

The opinion of Bacon on this subject [geometry] was diametrically opposed to that of the ancient philosophers. He valued geometry chiefly, if not solely, on account of those uses, which to Plato appeared so base. And it is remarkable that the longer Bacon lived the stronger this feeling became. When in 1605 he wrote the two books on the Advancement of Learning, he dwelt on the advantages which mankind derived from mixed mathematics; but he at the same time admitted that the beneficial effect produced by mathematical study on the intellect, though a collateral advantage, was no less worthy than that which was principal and intended. But it is evident that his views underwent a change. When near twenty years later, he published the De Augmentis, which is the Treatise on the Advancement of Learning, greatly expanded and carefully corrected, he made important alterations in the part which related to mathematics. He condemned with severity the pretensions of the mathematicians, delidas et faslum mathematicorum. Assuming the well-being of the human race to be the end of knowledge, he pronounced that mathematical science could claim no higher rank than that of an appendage or an auxiliary to other sciences. Mathematical science, he says, is the handmaid of natural philosophy; she ought to demean herself as such; and he declares that he cannot conceive by what ill chance it has happened that she presumes to claim precedence over her mistress.

There is an influence which is getting strong and stronger day by day, which shows itself more and more in all departments of human activity, and influence most fruitful and beneficial—the influence of the artist. It was a happy day for the mass of humanity when the artist felt the desire of becoming a physician, an electrician, an engineer or mechanician or—whatnot—a mathematician or a financier; for it was he who wrought all these wonders and grandeur we are witnessing. It was he who abolished that small, pedantic, narrow-grooved school teaching which made of an aspiring student a galley-slave, and he who allowed freedom in the choice of subject of study according to one's pleasure and inclination, and so facilitated development.

Whatever opinions we may adopt as to the physical constitution of comets, we must admit that they serve some grand and important purpose in the economy of the universe; for we cannot suppose that the Almighty has created such an immense number of bodies, and set them in rapid motion according to established laws, without an end worthy of his perfections, and, on the whole, beneficial to the inhabitants of the system through which they move.

In The Sidereal Heavens and Other Subjects Connected with Astronomy: As Illustrative of the Character of the Deity, and of an Infinity of Worlds (1871), 353.

When an hypothesis has come to birth in the mind, or gained footing there, it leads a life so far comparable with the life of an organism, as that it assimilates matter from the outside world only when it is like in kind with it and beneficial; and when contrarily, such matter is not like in kind but hurtful, the hypothesis, equally with the organism, throws it off, or, if forced to take it, gets rid of it again entirely.