Governments of the Industrial World, you weary giants of flesh and steel, I come from Cyberspace, the new home of Mind. On behalf of the future, I ask you of the past to leave us alone. You are not welcome among us. You have no sovereignty where we gather.

Opening statement of 'A Declaration of the Independence of Cyberspace' (8 Feb 1996). Published on Electronic Frontier Foundation website. Reproduced in Lawrence Lessig, Code: Version 2.0) (2008), 302.

I assume that each organism which the Creator educed was stamped with an indelible specific character, which made it what it was, and distinguished it from everything else, however near or like. I assume that such character has been, and is, indelible and immutable; that the characters which distinguish species now, were as definite at the first instant of their creation as now and are as distinct now as they were then. If any choose to maintain... that species were gradually bought to their present maturity from humbler forms... he is welcome to his hypothesis, but I have nothing to do with it.

I do not forget that Medicine and Veterinary practice are foreign to me. I desire judgment and criticism upon all my contributions. Little tolerant of frivolous or prejudiced contradiction, contemptuous of that ignorant criticism which doubts on principle, I welcome with open arms the militant attack which has a method of doubting and whose rule of conduct has the motto More light. 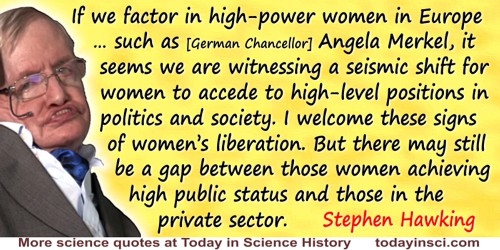 If we factor in high-powered women in Europe as well, such as [German Chancellor] Angela Merkel, it seems we are witnessing a seismic shift for women to accede to high-level positions in politics and society. But there may still be a gap between those women achieving high public status and those in the private sector. I welcome these signs of womens liberation.

From TV show interview with Piers Morgan, on ITV, 'Good Morning Britain'. Transcribed from online video, 'Stephen Hawking on Donald Trump's US: "I Fear I May Not Be Welcome" | Good Morning Britain' on youtube.com website. Also quoted online at huffingtonpost.com in Hayley Miller, 'Stephen Hawking Teaches Piers Morgan A Valuable Lesson In Gender Equality', Huffington Post (20 Mar 2017), but given there with sentences reordered as 1st, 3rd, 2nd.

In a nutshell, the universe is 4% visible, 23% undetectable and 73% unimaginable. Welcome to the cosmos, full of mass you can measure but not manhandle, driven by a force you can infer but not explain.

Im not afraid of facts, I welcome facts but a congeries of fact is not equivalent to an idea. This is the essential fallacy of the so-called scientific mind. People who mistake facts for ideas are incomplete thinkers; they are gossips.

In 'We Are the Crazy Lady and Other Feisty Feminist Fables,' in The First Ms. Reader edited by Francine Klagsburn (1972).

Looking outward to the blackness of space, sprinkled with the glory of a universe of lights, I saw majestybut no welcome. Below was a welcoming planet. There, contained in the thin, moving, incredibly fragile shell of the biosphere is everything that is dear to you, all the human drama and comedy. Thats where life is; thats where all the good stuff is.

Of all the offspring of Time, Error is the most ancient, and is so old and familiar an acquaintance, that Truth, when discovered, comes upon most of us like an intruder, and meets the intruders welcome.

Skepticism and debate are always welcome and are critically important to the advancement of science, [but] skepticism that fails to account for evidence is no virtue.

The cult of individual personalities is always, in my view, unjustified. To be sure, nature distributes her gifts variously among her children. But there are plenty of the well-endowed ones too, thank God, and I am firmly convinced that most of them live quiet, unregarded lives. It strikes me as unfair, and even in bad taste, to select a few of them for boundless admiration, attributing superhuman powers of mind and character to them. This has been my fate, and the contrast between the popular estimate of my powers and achievements and the reality is simply grotesque. The consciousness of this extraordinary state of affairs would be unbearable but for one great consoling thought: it is a welcome symptom in an age which is commonly denounced as materialistic, that it makes heroes of men whose ambitions lie wholly in the intellectual and moral sphere. This proves that knowledge and justice are ranked above wealth and power by a large section of the human race. My experience teaches me that this idealistic outlook is particularly prevalent in America, which is usually decried as a particularly materialistic country.

The history of science should not be an instrument to defend any kind of social or philosophic theory; it should be used only for its own purpose, to illustrate impartially the working of reason against unreason, the gradual unfolding of truth, in all its forms, whether pleasant or unpleasant, useful of useless, welcome or unwelcome.

In A History of Science: Volume 1: Ancient Science Through the Golden Age of Greece (1952), xiv.

In Joseph Silk, The Infinite Cosmos: Questions from the Frontiers of Cosmology (2006), 199.

The wall that says "welcome, stranger" has never been built.

Aphorism as given by the fictional character Dezhnev Senior, in Fantastic Voyage II: Destination Brain (1987), 210.

When Franklin drew the lightning from the clouds, he little dreamed that in the evolution of science his discovery would illuminate the torch of Liberty for France and America. The rays from this beacon, lighting this gateway to the continent, will welcome the poor and the persecuted with the hope and promise of homes and citizenship.