[About John Evershed] There is much in our medallistŌĆÖs career which is a reminder of the scientific life of Sir William Huggins. They come from the same English neighbourhood and began as amateurs of the best kind. They both possess the same kind of scientific aptitude.

American archaeology has always attracted lots of amateurs ... They were digging up Indian pottery all over the place.

As quoted by Braddock Gaskill, 'TGV Rockets ŌĆśWalking before they can runŌĆÖ', on web page of nasaspaceflight.com (Sep 2005). Confirmed by email from Pat Bahn (7 Jul 09).

Botany is the school for patience, and itŌĆÖs amateurs learn resignation from daily disappointments.

In letter to Madame de Tess├® (25 Apr 1788). In Thomas Jefferson Correspondence: Printed from the Originals (1916), 7. The errant apostrophe in ŌĆ£itŌĆÖsŌĆØ appears in more than one texts checked by Webmaster.

During my pre-college years I went on many trips with my father into the oil fields to visit their operations. ŌĆ” I puttered around the machine, electronics, and automobile shops while he carried on his business. Both of my parents are inveterate do-it-yourselfers, almost no task being beneath their dignity or beyond their ingenuity. Having picked up a keen interest in electronics from my father, I used to fix radios and later television sets for fun and spending money. I built my own hi-fi set and enjoyed helping friends with their amateur radio transmitters, but lost interest as soon as they worked.

Remarks on how his high school interests foreshadowed his career as a radio astronomer. From autobiography in Stig Lundqvist (ed.) Nobel Lectures, Physics 1971-1980 (1992).

Effective science began when it passed from the occasional amateur into the hands of men who made the winning of knowledge their special function or profession.

Address to 48th annual summer convention of the American Institute of Electriccal Engineers, Cleveland (21 Jun 1932), abridged in 'The R├┤le of the Engineer', The Electrical Journal (1932), 109, 223.

Hitler is livingŌĆöor shall I say sitting?ŌĆöon the empty stomach of Germany. As soon as economic conditions improve, Hitler will sink into oblivion. He dramatizes impossible extremes in an amateurish manner.

I ŌĆ” began my career as a wireless amateur. After 43 years in radio, I do not mind confessing that I am still an amateur. Despite many great achievements in the science of radio and electronics, what we know today is far less than what we have still to learn.

It was to Hofmeister, working as a young man, an amateur and enthusiast, in the early morning hours of summer months, before business, at Leipzig in the years before 1851, that the vision first appeared of a common type of Life-Cycle, running through Mosses and Ferns to Gymnosperms and Flowering Plants, linking the whole series in one scheme of reproduction and life-history.

My amateur interest in astronomy brought out the term ŌĆ£magnitude,ŌĆØ which is used for the brightness of a star.

Never be afraid to try something new. Remember, amateurs built the Ark, professionals built the Titanic.

Ralph Keyes, in The Quote Verifier: Who Said What, Where, and When (2007), 116, states ŌĆ£This is a new saw that floats about in search of an originator.ŌĆØ It was seen, for example, in the her advice column, shortly before Abby stopped writing her column. A variant, with only the ŌĆ£amateursŌĆØ and ŌĆ£professionals" clauses, appears as early 1984 in The World Economy, Vol. 7, 406.

Parenthood is the only profession that has been left exclusively to amateurs.

She [Nettie Stevens] was a trained expert in the modern senseŌĆöin the sense in which biology has ceased to be a playground for the amateur and a plaything for the mystic. 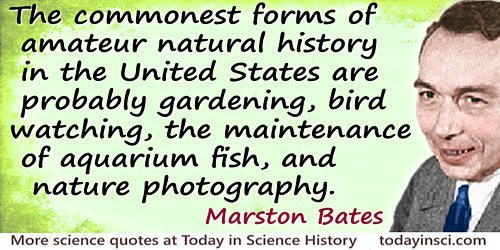 The commonest forms of amateur natural history in the United States are probably gardening, bird watching, the maintenance of aquarium fish, and nature photography.

The invention of IQ did a great disservice to creativity in education. ... Individuality, personality, originality, are too precious to be meddled with by amateur psychiatrists whose patterns for a ŌĆ£wholesome personalityŌĆØ are inevitably their own.

What an amateur is, is a lover of a subject. IŌĆÖm a lover of facts. The fact is the savior, as long as you donŌĆÖt jam it into some preconceived pattern.

From interview, Carol Krucoff, 'The 6 OŌĆÖClock Scholar: Librarian of Congress Daniel Boorstin And His Love Affair With Books', The Washington Post (29 Jan 1984), K8.

What is peculiar and new to the [19th] century, differentiating it from all its predecessors, is its technology. It was not merely the introduction of some great isolated inventions. It is impossible not to feel that something more than that was involved. ŌĆ” The process of change was slow, unconscious, and unexpected. In the nineteeth century, the process became quick, conscious, and expected. ŌĆ” The whole change has arisen from the new scientific information. Science, conceived not so much in its principles as in its results, is an obvious storehouse of ideas for utilisation. ŌĆ” Also, it is a great mistake to think that the bare scientific idea is the required invention, so that it has only to be picked up and used. An intense period of imaginative design lies between. One element in the new method is just the discovery of how to set about bridging the gap between the scientific ideas, and the ultimate product. It is a process of disciplined attack upon one difficulty after another This discipline of knowledge applies beyond technology to pure science, and beyond science to general scholarship. It represents the change from amateurs to professionals. ŌĆ” But the full self-conscious realisation of the power of professionalism in knowledge in all its departments, and of the way to produce the professionals, and of the importance of knowledge to the advance of technology, and of the methods by which abstract knowledge can be connected with technology, and of the boundless possibilities of technological advance,ŌĆöthe realisation of all these things was first completely attained in the nineteeth century.

When ŌĆ” a large number of renegade specialists and amateurs believe contrary to the most prestigious experts, the latter say, well science is not democratic, it is what the people who know the most sayŌĆöthat is what counts!

[In high school,] I continued interest in experiments in physics related to astronomy and spectroscopy. I remember building various gadgets involved with the spectrograph in country houses that we rented in the summer, well before going to college. About 1923 our school radio club erected a giant-antenna and communicated with Australia by voice, which was I think early for radio amateurs. I had an early interest in radio. I remember back in summer camp hearing radio stations with an old crystal detector with coils I had wound when I was only nine or ten. Thus, I had an interest in radio at the beginning of radio astronomy in the United States [1933].

Oral History Transcript of interview with Dr. Jesse Greenstein by Paul Wright (31 Jul 1974), on website of American Institute of Physics.