[About Sir Roderick Impey Murchison:] The enjoyments of elegant life you early chose to abandon, preferring to wander for many successive years over the rudest portions of Europe and Asiaregions new to Sciencein the hope, happily realized, of winning new truths.
By a rare union of favourable circumstances, and of personal qualifications equally rare, you have thus been enabled to become the recognized Interpreter and Historian (not without illustrious aid) of the Silurian Period.

A man who speaks out honestly and fearlessly that which he knows, and that which he believes, will always enlist the good will and the respect, however much he may fail in winning the assent, of his fellow men.

Reflection #295, Thomas Henry Huxley and Henrietta A. Huxley (ed.), Aphorisms and Reflections from the Works of T.H. Huxley (1907).

An article in Bioscience in November 1987 by Julie Ann Miller claimed the cortex was a quarter-meter square. That is napkin-sized, about ten inches by ten inches. Scientific American magazine in September 1992 upped the ante considerably with an estimate of 1½ square meters; thats a square of brain forty inches on each side, getting close to the card-table estimate. A psychologist at the University of Toronto figured it would cover the floor of his living room (I havent seen his living room), but the prize winning estimate so far is from the British magazine New Scientists poster of the brain published in 1993 which claimed that the cerebral cortex, if flattened out, would cover a tennis court. How can there be such disagreement? How can so many experts not know how big the cortex is? I dont know, but Im on the hunt for an expert who will say the cortex, when fully spread out, will cover a football field. A Canadian football field.

An important scientific innovation rarely makes its way by gradually winning over and converting its opponents. What does happen is that its opponents gradually die out, and that the growing generation is familiarized with the ideas from the beginning.

Debate is an art form. It is about the winning of arguments. It is not about the discovery of truth. There are certain rules and procedures to debate that really have nothing to do with establishing factwhich creationists have mastered. Some of those rules are: never say anything positive about your own position because it can be attacked, but chip away at what appear to be the weaknesses in your opponents position. They are good at that. I dont think I could beat the creationists at debate. I can tie them. But in courtrooms they are terrible, because in courtrooms you cannot give speeches. In a courtroom you have to answer direct questions about the positive status of your belief. We destroyed them in Arkansas. On the second day of the two-week trial we had our victory party!

Effective science began when it passed from the occasional amateur into the hands of men who made the winning of knowledge their special function or profession.

Address to 48th annual summer convention of the American Institute of Electriccal Engineers, Cleveland (21 Jun 1932), abridged in 'The Rôle of the Engineer', The Electrical Journal (1932), 109, 223.

I figure you have the same chance of winning the lottery whether you play or not.

If this is what the McCarran Act means in practice, it seems to us a form of organized cultural suicide.
In a letter co-signed with his Princeton University physics professor colleagues, Walker Bleakney and Milton G. White, protesting that Nobel Prize-winning, Cambridge professor, Dirac having been invited for a year's visit to Princeton, had been denied a visa by the U.S. State Department under section 212A of the Immigration and Naturalization Act (McCarran Act). Quoting a report in Physics Today, this regulation includes 'categories of undesireables ranging from vagrants to stowaways.' The real reason remains unclear, but was perhaps related to Dirac's prior science-related visits to Russia. Robert Oppenheimer's security clearance had recently been revoked, and this was the era of McCarthy's rabid anti-Communism hearings.

Its tempting to go to the throat of the volcano to get the data, because if you do youre a hero  Its a battle between your mind and your emotions. If your emotions win out, you can get yourself in a lot of trouble.

Quoted by Ron Russell in 'Column One: In pursuit of Deadly Volcanoes', Los Angeles Times (25 Jun 1991), an article about for three scientists that had died in a volcano eruption.

So use all that is called Fortune. Most men gamble with her, and gain all, and lose all, as her wheel rolls. But do thou leave as unlawful these winnings, and deal with Cause and Effect, the Chancellors of God.

From 'Self-Reliance', collected in The Complete Works of Ralph Waldo Emerson (1903), 89.

Suppose it were perfectly certain that the life and fortune of every one of us would, one day or other, depend upon his winning or losing a game of chess. Don't you think that we should all consider it to be a primary duty to learn at least the names and the moves of the pieces; to have a notion of a gambit, and a keen eye for all the means of giving and getting out of check? Do you not think that we should look with a disapprobation amounting to scorn upon the father who allowed his son, or the state which allowed its members, to grow up without knowing a pawn from a knight?
Yet, it is a very plain and elementary truth that the life, the fortune, and the happiness of every one of us, and, more or less, of those who are connected with us, do depend upon our knowing something of the rules of a game infinitely more difficult and complicated than chess. It is a game which has been played for untold ages, every man and woman of us being one of the two players in a game of his or her own. The chess-board is the world, the pieces are the phenomena of the universe, the rules of the game are what we call the laws of nature. The player on the other side is hidden from us. We know that his play is always fair, just, and patient. But also we know, to our cost, that he never overlooks a mistake, or makes the smallest allowance for ignorance. To the man who plays well the highest stakes are paid with that sort of overflowing generosity with which the strong shows delight in strength. And one who plays ill is checkmatedwithout haste, but without remorse.

The excitement that a gambler feels when making a bet is equal to the amount he might win times the probability of winning it.

As quoted, without citation, in Nicholas J. Rose Mathematical Maxims and Minims (1988). Rose attributes the quote to Blaise Pascal, but Webmaster has, so far, found nothing like it by Pascal. Can you help? [Present opinion: This quote does not ring true for Pascal Webmaster.] 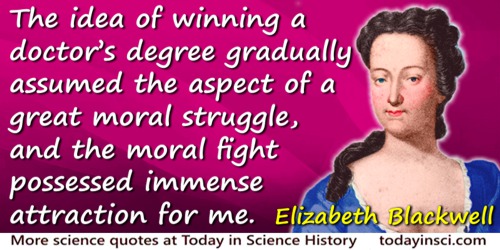 The idea of winning a doctors degree gradually assumed the aspect of a great moral struggle, and the moral fight possessed immense attraction for me.

In Pioneer Work in Opening the Medical Profession to Women (1895), 29.

The vast outpourings of publications by Professor Djerassi and his cohorts marks him as one of the most prolific scientific writers of our day... a plot of N, the papers published by Professor Djerassi in a given year, against T, the year (starting with 1945, T = 0) gives a good straight-line relationship. This line follows the equation N = 2.413T + 1.690 ... Assuming that the inevitable inflection point on the logistic curve is still some 10 years away, this equation predicts (a) a total of about 444 papers by the end of this year, (b) the average production of one paper per week or more every year beginning in 1966, and (c) the winning of the all-time productivity world championship in 10 years from now, in 1973. In that year Professor Djerassi should surpass the record of 995 items held by ...

This is only one step in a much larger project. I discovered (no, not me: my team) the function of sugar nucleotides in cell metabolism. I want others to understood this, but it is not easy to explain: this is not a very noteworthy deed, and we hardly know even a little.
[replying when asked about the significance of his Nobel prize-winning achievement.]