A Chinese tale tells of some men sent to harm a young girl who, upon seeing her beauty, become her protectors rather than her violators. Thats how I felt seeing the Earth for the first time. "I could not help but love and cherish her.

A great man, [who] was convinced that the truths of political and moral science are capable of the same certainty as those that form the system of physical science, even in those branches like astronomy that seem to approximate mathematical certainty.
He cherished this belief, for it led to the consoling hope that humanity would inevitably make progress toward a state of happiness and improved character even as it has already done in its knowledge of the truth.

A mere inference or theory must give way to a truth revealed; but a scientific truth must be maintained, however contradictory it may appear to the most cherished doctrines of religion. 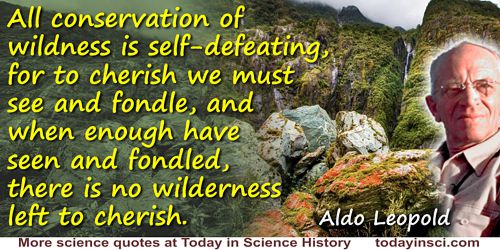 All conservation of wildness is self-defeating, for to cherish we must see and fondle, and when enough have seen and fondled, there is no wilderness left to cherish.

Before I flew I was already aware of how small and vulnerable our planet is; but only when I saw it from space, in all its ineffable beauty and fragility, did I realize that humankinds most urgent task is to cherish and preserve it for future generations.

But how is one to determine what is pleasing to God? ... Whatever is unpleasant to man is pleasant to God. The test is the natural instinct of man. If there arises within ones dark recesses a hot desire to do this or that, then it is the paramount duty of a Christian to avoid doing this or that. And if, on the contrary, one cherishes an abhorrence of the business, then one must tackle it forthwith, all the time shouting Hallelujah! A simple enough religion, surelysimple, satisfying and idiotic.

Cherish you visions and your dreams as they are the children of your soul; the blue prints of your ultimate achievements.

From my earliest childhood I nourished and cherished the desire to make a creditable journey in a new country, and write such a respectable account of its natural history as should give me a niche amongst the scientific explorers of the globe I inhabit, and hand my name down as a useful contributor of original matter.

In scientific study, or, as I prefer to phrase it, in creative scholarship, the truth is the single end sought; all yields to that. The truth is supreme, not only in the vague mystical sense in which that expression has come to be a platitude, but in a special, definite, concrete sense. Facts and the immediate and necessary inductions from facts displace all pre-conceptions, all deductions from general principles, all favourite theories. Previous mental constructions are bowled over as childish play-structures by facts as they come rolling into the mind. The dearest doctrines, the most fascinating hypotheses, the most cherished creations of the reason and of the imagination perish from a mind thoroughly inspired with the scientific spirit in the presence of incompatible facts. Previous intellectual affections are crushed without hesitation and without remorse. Facts are placed before reasonings and before ideals, even though the reasonings and the ideals be more beautiful, be seemingly more lofty, be seemingly better, be seemingly truer. The seemingly absurd and the seemingly impossible are sometimes true. The scientific disposition is to accept facts upon evidence, however absurd they may appear to our pre-conceptions.

The Ethical Functions of Scientific Study: An Address Delivered at the Annual Commencement of the University of Michigan, 28 June 1888, 7-8.

In the final analysis, our most basic common link is that we all inhabit this small planet. We all breathe the same air. We all cherish our children's future. And we are all mortal.

It has been said that astronomy is a humbling and character building experience. There is perhaps no better demonstration of the folly of human conceits than this distant image of our tiny world. To me, it underscores our responsibility to deal more kindly with one another, and to preserve and cherish the pale blue dot, the only home weve ever known.

Learn the leading precognita of all things—no need to turn over leaf by leaf, but grasp the trunk hard and you will shake all the branches.
Advice cherished by Samuel Johnson that that, if one is to master any subject, one must first discover its general principles. 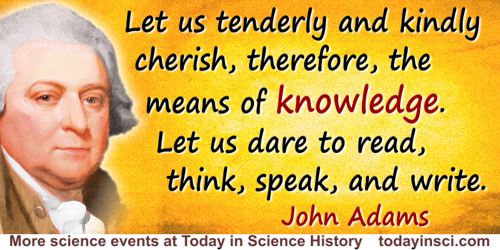 Let us tenderly and kindly cherish, therefore, the means of knowledge. Let us dare to read, think, speak, and write.

Dissertation on the Canon and Feudal Law (as it was later known), originally published untitled and with no author credited in the Boston Gazette (Aug 1765). Collected in John Adams and Charles Francis Adams (ed.), The Works of John Adams (1851), Vol. 3, 462.

Many will, no doubt, prefer to retain old unsystematic names as far as possible, but it is easy to see that the desire to avoid change may carry us too far in this direction; it will undoubtedly be very inconvenient to the present generation of chemists to abandon familiar and cherished names, but nevertheless it may be a wise course to boldly face the difficulty, rather than inflict on coming generations a partially illogical and unsystematic nomenclature.

Science and politics become the hobby of, and are cherished only by, the elect few; but religion becomes, through education, the property of all, without reference to station, age, and sex.

From an essay, reprinted as 'The Elect People' in Rev. W. Ayerst The Jews of the Nineteenth Century: A Collection of Essays, Reviews and Historical Notices, Originally Published in the Jewish Intelligence (1848) 119.

The blood, the fountain whence the spirits flow,
The generous stream that waters every part,
And motion, vigour, and warm life conveys
To every Particle that moves or lives;
This vital fluid, thro' unnumber'd tubes
Pour'd by the heart, and to the heart again
Refunded; scourg'd forever round and round;
Enrag'd with heat and toil, at last forgets
Its balmy nature; virulent and thin
It grows; and now, but that a thousand gates
Are open to its flight, it would destroy
The parts it cherish' d and repair'd before.
Besides, the flexible and tender tubes
Melt in the mildest, most nectareous tide
That ripening Nature rolls; as in the stream
Its crumbling banks; but what the vital force
Of plastic fluids hourly batters down,
That very force, those plastic particles
Rebuild: so mutable the state of man.
For this the watchful appetite was given,
Daily with fresh materials to repair
This unavoidable expense of life,
This necessary waste of flesh and blood.
Hence the concoctive powers, with various art,
Subdue the cruder aliments to chyle;
The chyle to blood; the foamy purple tide
To liquors, which through finer arteries
To different parts their winding course pursue;
To try new changes, and new forms put on,
Or for the public, or some private use.

The desire for guidance, love, and support prompts men to form the social or moral conception of God. This is the God of Providence, who protects, disposes, rewards, and punishes; the God who, according to the limits of the believers outlook, loves and cherishes the life of the tribe or of the human race, or even or life itself; the comforter in sorrow and unsatisfied longing; he who preserves the souls of the dead. This is the social or moral conception of God.

The facts of life do not penetrate to the sphere in which our beliefs are cherished; they did not engender those beliefs, and they are powerless to destroy them.

The hallmark of scientific behaviour is a certain scepticism even towards ones most cherished theories.

Whereas there is nothing more necessary for promoting the improvement of Philosophical Matters, than the communicating to such, as apply their Studies and Endeavours that way, such things as are discovered or put in practice by others; it is therefore thought fit to employ the Press, as the most proper way to gratifie those, whose engagement in such Studies, and delight in the advancement of Learning and profitable Discoveries, doth entitle them to the knowledge of what this Kingdom, or other parts of the World, do, from time to time, afford as well of the progress of the Studies, Labours, and attempts of the Curious and learned in things of this kind, as of their compleat Discoveries and performances: To the end, that such Productions being clearly and truly communicated, desires after solid and usefull knowledge may be further entertained, ingenious Endeavours and Undertakings cherished, and those, addicted to and conversant in such matters, may be invited and encouraged to search, try, and find out new things, impart their knowledge to one another, and contribute what they can to the Grand design of improving Natural knowledge, and perfecting all Philosophical Arts, and Sciences. All for the Glory of God, the Honour and Advantage of these Kingdoms, and the Universal Good of Mankind.