A Chinese tale tells of some men sent to harm a young girl who, upon seeing her beauty, become her protectors rather than her violators. Thats how I felt seeing the Earth for the first time. "I could not help but love and cherish her.

A first step in the study of civilization is to dissect it into details, and to classify these in their proper groups. Thus, in examining weapons, they are to be classed under spear, club, sling, bow and arrow, and so forth; among textile arts are to be ranged matting, netting, and several grades of making and weaving threads; myths are divided under such headings as myths of sunrise and sunset, eclipse-myths, earthquake-myths, local myths which account for the names of places by some fanciful tale, eponymic myths which account for the parentage of a tribe by turning its name into the name of an imaginary ancestor; under rites and ceremonies occur such practices as the various kinds of sacrifice to the ghosts of the dead and to other spiritual beings, the turning to the east in worship, the purification of ceremonial or moral uncleanness by means of water or fire. Such are a few miscellaneous examples from a list of hundreds  To the ethnographer, the bow and arrow is the species, the habit of flattening childrens skulls is a species, the practice of reckoning numbers by tens is a species. The geographical distribution of these things, and their transmission from region to region, have to be studied as the naturalist studies the geography of his botanical and zoological species.

All versions written for nonscientists speak of fused males as the curious tale of the anglerfishjust as we so often hear about the monkey swinging through the trees, or the worm burrowing through soil. But if nature teaches us any lesson, it loudly proclaims lifes diversity. There aint no such abstraction as the clam, the fly, or the anglerfish. Ceratioid anglerfishes come in nearly 100 species, and each has its own peculiarity.

An old paleontological in joke proclaims that mammalian evolution is a tale told by teeth mating to produce slightly altered descendant teeth. 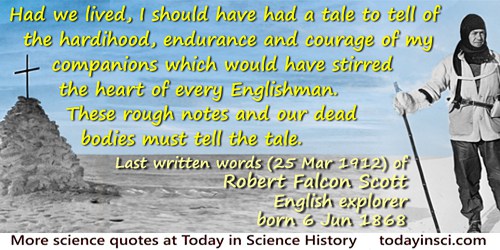 Had we lived, I should have had a tale to tell of the hardihood, endurance and courage of my companions which would have stirred the heart of every Englishman. These rough notes and our dead bodies must tell the tale, but surely, a great rich country like ours will see that those who are dependent on us are properly provided for.
[Final words in a 'Message to the Public' left written in his diary dated 25 March 1912, shortly before he died on the Ross Ice Barrier, Antarctica. When searchers found his body, on 12 Nov 1912, Scott was discovered sitting upright against the pole of the tent with the diary behind his head, as if for a pillow.]

Final words in a 'Message to the Public' left written in his diary dated 25 March 1912, shortly before he died on the Ross Ice Barrier, Antarctica. In Logan Marshall, The Story of Polar Conquest: The Complete History of Arctic and Antarctic (1913), 24-25. by Logan Marshall - Polar regions - 1913

I am told that the wall paintings which we had the happiness of admiring in all their beauty and freshness [in the chapel she discovered at Abu Simbel] are already much injured. Such is the fate of every Egyptian monument, great or small. The tourist carves it over with names and dates, and in some instances with caricatures. The student of Egyptology, by taking wet paper squeezes sponges away every vestige of the original colour. The Collector buys and carries off everything of value that he can, and the Arab steals it for him. The work of destruction, meanwhile goes on apace. The Museums of Berlin, of Turin, of Florence are rich in spoils which tell their lamentable tale. When science leads the way, is it wonderful that ignorance should follow?

Its almost a sort of fairy story tale, just what a novelist would write about a discovery.
[Describing how the original idea on the principle of the maser came to him.]

Lest men suspect your tale untrue,
Keep probability in view.

Men fear Death, as children fear to go in the dark; and as that natural fear in children is increased with tales, so is the other.

The chemist works along his own brilliant line of discovery and exposition; the astronomer has his special field to explore; the geologist has a well-defined sphere to occupy. It is manifest, however, that not one of these men can tell the whole tale, and make a complete story of creation. Another man is wanted. A man who, though not necessarily going into formal science, sees the whole idea, and speaks of it in its unity. This man is the theologian. He is not a chemist, an astronomer, a geologist, a botanisthe is more: he speaks of circles, not of segments; of principles, not of facts; of causes and purposes rather than of effects and appearances. Not that the latter are excluded from his study, but that they are so wisely included in it as to be put in their proper places.

The last level of metaphor in the Alice books is this: that life, viewed rationally and without illusion, appears to be a nonsense tale told by an idiot mathematician. At the heart of things science finds only a mad, never-ending quadrille of Mock Turtle Waves and Gryphon Particles. For a moment the waves and particles dance in grotesque, inconceivably complex patterns capable of reflecting on their own absurdity.

Until lions have their historians, tales of the hunt shall always glorify the hunter.

We spend our years as a tale that is told, but the tale varies in a hundred different ways, varies between man and man, between year and year, between youth and age, sorrow and joy, laughter and tears. How different the story of the childs year from the mans; how much longer it seems; how far apart seem the vacations, and the Christmases, and the New Years! But let the child become a man, and he will find that he can tell full fast enough these stories of a year; that if he is disposed to make good use of them he has no hours to wish away; the plot develops very rapidly, and the conclusion gallops on the very heels of that first chapter which records the birth of a new year.