A mathematicians work is mostly a tangle of guesswork, analogy, wishful thinking and frustration, and proof, far from being the core of discovery, is more often than not a way of making sure that our minds are not playing tricks. 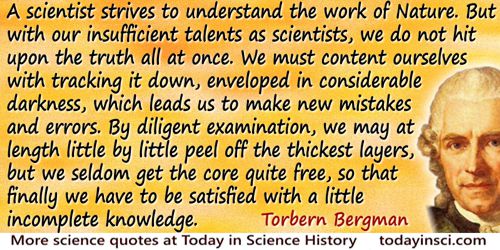 A scientist strives to understand the work of Nature. But with our insufficient talents as scientists, we do not hit upon the truth all at once. We must content ourselves with tracking it down, enveloped in considerable darkness, which leads us to make new mistakes and errors. By diligent examination, we may at length little by little peel off the thickest layers, but we seldom get the core quite free, so that finally we have to be satisfied with a little incomplete knowledge.

For the environmentalists, The Space Option is the ultimate environmental solution. For the Cornucopians, it is the technological fix that they are relying on. For the hard core space community, the obvious by-product would be the eventual exploration and settlement of the solar system. For most of humanity however, the ultimate benefit is having a realistic hope in a future with possibilities.... If our species does not soon embrace this unique opportunity with sufficient commitment, it may miss its one and only chance to do so. Humanity could soon be overwhelmed by one or more of the many challenges it now faces. The window of opportunity is closing as fast as the population is increasing. Our future will be either a Space Age or a Stone Age.

I am a hard-core believer that the clean desktop is the way to go. At the same time, we told OEMs that if they were going to put a bunch of icons on the desktop, then so were we.

From interview with Peter Galli, 'Allchin: Staying the Course on XP', on eWeek website (13 Aug 2001), anticipating the launch of Windows XP.

Individual science fiction stories may seem as trivial as ever to the blinder critics and philosophers of todaybut the core of science fiction, its essence, the concept around which it revolves, has become crucial to our salvation if we are to be saved a

Part of the strength of science is that it has tended to attract individuals who love knowledge and the creation of it.
Just as important to the integrity of science have been the unwritten rules of the game. These provide recognition and approbation for work which is imaginative and accurate, and apathy or criticism for the trivial or inaccurate.  Thus, it is the communication process which is at the core of the vitality and integrity of science.

Pride is a sense of worth derived from something that is not organically part of us, while self-esteem derives from the potentialities and achievements of the self. We are proud when we identify ourselves with an imaginary self, a leader, a holy cause, a collective body or possessions. There is fear and intolerance in pride; it is sensitive and uncompromising. The less promise and potency in the self, the more imperative is the need for pride. The core of pride is self-rejection.

Religions are tough. Either they make no contentions which are subject to disproof or they quickly redesign doctrine after disproof.  near the core of the religious experience is something remarkably resistant to rational inquiry.

Science is rooted in the will to truth. With the will to truth it stands or falls. Lower the standard even slightly and science becomes diseased at the core. Not only science, but man. The will to truth, pure and unadulterated, is among the essential conditions of his existence; if the standard is compromised he easily becomes a kind of tragic caricature of himself.

Science will continue to surprise us with what it discovers and creates; then it will astound us by devising new methods to surprise us. At the core of sciences self-modification is technology. New tools enable new structures of knowledge and new ways of discovery. The achievement of science is to know new things; the evolution of science is to know them in new ways. What evolves is less the body of what we know and more the nature of our knowing.

'Speculations on the Future of Science'. In Clifford A. Pickover, Archimedes to Hawking: Laws of Science and the Great Minds Behind Them (2008), 172.

The conditions of the earths core are starlike. From their study can physicists of the future tell us something more of the true nature of the stars?

This political movement has patently demonstrated that it will not defend the integrity of science in any case in which science runs afoul of its core political constituencies. In so doing, it has ceded any right to govern a technologically advanced and sophisticated nation.