A fear of intellectual inadequacy, of powerlessness before the tireless electronic wizards, has given rise to dozens of science-fiction fantasies of computer takeovers. ... Other scientists too are apprehensive. D. Raj Reddy, a computer scientist at PittsburghŌĆÖs Carnegie-Mellon University, fears that universally available microcomputers could turn into formidable weapons. Among other things, says Reddy, sophisticated computers in the wrong hands could begin subverting a society by tampering with peopleŌĆÖs relationships with their own computersŌĆöinstructing the other computers to cut off telephone, bank and other services, for example.

An early prediction of DDoS (Distributed Denial of Service), viruses and worms like Stuxnet. As stated, without further citation, in 'The Age of Miracle Chips', Time (20 Feb 1978), 44. The article introduces a special section on 'The Computer Society.' Please contact Webmaster if you know a primary source.

Ever since I was a boy, IŌĆÖve been fascinated by crazy science and such things as perpetual motion machines and logical paradoxes. IŌĆÖve always enjoyed keeping up with those ideas. I suppose I didnŌĆÖt get into it seriously until I wrote my first book, Fads and Fallacies in the Name of Science. I was influenced by the Dianetics movement, now called Scientology, which was then promoted by John Campbell in Astounding Science Fiction. I was astonished at how rapidly the thing had become a cult.

Everything is becoming science fiction; From the margins of an almost invisible literature has sprung the intact reality of the 20th century

I consider [H. G. Wells], as a purely imaginative writer, to be deserving of very high praise, but our methods are entirely different. I have always made a point in my romances of basing my so-called inventions upon a groundwork of actual fact, and of using in their construction methods and materials which are not entirely without the pale of contemporary engineering skill and knowledge. ... The creations of Mr. Wells, on the other hand, belong unreservedly to an age and degree of scientific knowledge far removed from the present, though I will not say entirely beyond the limits of the possible.

I do not see the possibility of comparison between his [H. G. Wells] work and mine. We do not proceed in the same manner. It occurs to me that his stories do not repose on a very scientific basis. ... I make use of physics. He invents. I go to the moon in a cannon-ball, discharged from a cannon. Here there is no invention. He goes to Mars in an airship, which he constructs of a metal which does not obey the law of gravitation. Ça c'est très joli ... but show me this metal. Let him produce it.

I have been a sore-headed occupant of a file drawer labeled ŌĆśŌĆśScience FictionŌĆÖŌĆÖ; and I would like out, particularly since so many serious critics regularly mistake the drawer for a urinal

I suspect one of the reasons that fantasy and science fiction appeal so much to younger readers is that, when the space and time have been altered to allow characters to travel easily anywhere through the continuum and thus escape physical dangers and timepiece inevitabilities, mortality is so seldom an issue.

If science fiction is the mythology of modern technology, then its myth is tragic

If what we are doing is not seen by some people as science fiction, itŌĆÖs probably not transformative enough.

Explaining his enthusiasm for a laboratory experiment to grow a meat patty from cells in the lab, for which he contributed more than $330,000. In Alan Boyle, 'GoogleŌĆÖs Sergey Brin explains why he paid $330,000 for lab burger', nbcnews.com website, (5 Aug 2013).

In a dispassionate comparison of the relative values of human and robotic spaceflight, the only surviving motivation for continuing human spaceflight is the ideology of adventure. But only a tiny number of EarthŌĆÖs six billion inhabitants are direct participants. For the rest of us, the adventure is vicarious and akin to that of watching a science fiction movie.

In 'Is Human Spaceflight Obsolete?', Issues in Science and Technology (Summer 2004). [Note: published one year after the loss of seven lives in the Space Shuttle Columbia disaster. ŌĆöWebmaster]

Individual science fiction stories may seem as trivial as ever to the blinder critics and philosophers of todayŌĆōbut the core of science fiction, its essence, the concept around which it revolves, has become crucial to our salvation if we are to be saved a

It is said that fact is sometimes stranger than fiction, and nowhere is this more true than in the case of black holes. Black holes are stranger than anything dreamt up by science fiction writers. 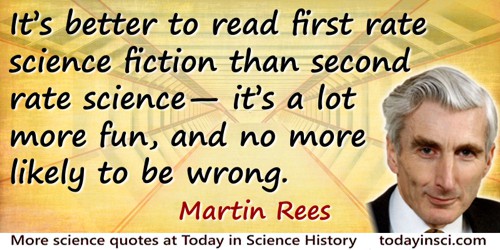 ItŌĆÖs better to read first rate science fiction than second rate scienceŌĆöitŌĆÖs a lot more fun, and no more likely to be wrong.

Not only is science fiction an idea of tremendous import, but it is to be an important factor in making the world a better place to live in, through educating the public to the possibilities of science and the influence of science on life which, even today, are not appreciated byu the man on the street. ... If every man, woman, boy and girl, could be induced to read science fiction right along, there would certainly be a great resulting benefit to the community, in that the educational standards of its people would be raised tremendously. Science fiction would make people happier, give them a broader understanding of the world, make tham more tolerant.

One of the biggest roles of science fiction is to prepare people to accept the future without pain and to encourage a flexibility of the mind. Politicians should read science fiction, not westerns and detective stories.

Politicians should read science fiction, not westerns and detective stories.

Science fiction films are not about science. They are about disaster, which is one of the oldest subjects of art.

The Imagination of Disaster,' Against Interpretation (1966).

Science fiction writers foresee the inevitable, and although problems and catastrophes may be inevitable, solutions are not.

Science fiction writers, I am sorry to say, really do not know anything. We canŌĆÖt talk about science, because our knowledge of it is limited and unofficial, and usually our fiction is dreadful.

'How to Build a Universe That Doesn't Fall Apart Two Days Later,' introduction, I Hope I Shall Arrive Soon (1986).

EditorŌĆÖs introduction to anthology by Bryan W. Aldiss (ed.) Penguin Science Fiction (1961), 10. As quoted and cited in Gary Westfahl, George Slusser, Donald E. Palumbo (eds.) Science Fiction and the Two Cultures: Essays on Bridging the Gap Between the Sciences and the Humanities (2009), 5.

Science-fiction balances you on the cliff. Fantasy shoves you off.

The function of science fiction is not always to predict the future but sometimes to prevent it.

The rockets that have made spaceflight possible are an advance that, more than any other technological victory of the twentieth century, was grounded in science fictionŌĆ” . One thing that no science fiction writer visualized, however, as far as I know, was that the landings on the Moon would be watched by people on Earth by way of television.

There is a fifth dimension beyond that which is known to man. It is a dimension as vast as space and as timeless as infinity. It is the middle ground between light and shadow, between science and superstition, and it lies between the pit of manŌĆÖs fears and the summit of his knowledge. This is the dimension of imagination. It is an area which we call the Twilight Zone.

Three thousand stadia from the earth to the moon,ŌĆöthe first station. From thence to the sun about five hundred parasangs. ... Marvel not, my comrade, if I appear talking to you on super-terrestrial and aerial topics. The long and the short of the matter is that I am running over the order of a Journey I have lately made. ... I have travelled in the stars.
One of the earliest examples of what might be regarded as science fiction.

Icaromennipus, or the Aerial Jaunt in Ainsworth Rand Spofford (ed.), Rufus Edmonds Shapley (ed.) The Library of Wit and Humor, Prose and Poetry, Selected from the Literature of all Times and Nations (1894), vol. 4, 282-283. A shortened quote is on the title page of H. G. Wells, The First Men in the Moon (1901).

With science fiction I think we are preparing ourselves for contact with them, whoever they may be.

You donŌĆÖt get rich writing science fiction. If you want to get rich, you start a religion.

[First use of the term science fiction:] We hope it will not be long before we may have other works of Science-Fiction [like Richard Henry Horne's The Poor Artist], as we believe such books likely to fulfil a good purpose, and create an interest, where, unhappily, science alone might fail.
[Thomas] Campbell says, that ŌĆ£Fiction in Poetry is not the reverse of truth, but her soft and enchanting resemblance.ŌĆØ Now this applies especially to Science-Fiction, in which the revealed truths of Science may be given interwoven with a pleasing story which may itself be poetical and trueŌĆöthus circulating a knowledge of Poetry of Science, clothed in a garb of the Poetry of life.