A newspaper is a device for making the ignorant more ignorant and the crazy crazier.

Consider the very roots of our ability to discern truth. Above all (or perhaps I should say underneath all), common sense is what we depend onthat crazily elusive, ubiquitous faculty we all have to some degree or other.  If we apply common sense to itself over and over again, we wind up building a skyscraper. The ground floor of the structure is the ordinary common sense we all have, and the rules for building news floors are implicit in the ground floor itself. However, working it all out is a gigantic task, and the result is a structure that transcends mere common sense.

During seasons of great pestilence men have often believed the prophecies of crazed fanatics, that the end of the world was come. Credulity is always greatest in times of calamity. Prophecies of all sorts are rife on such occasions, and are readily believed, whether for good or evil.

Ever since I was a boy, Ive been fascinated by crazy science and such things as perpetual motion machines and logical paradoxes. Ive always enjoyed keeping up with those ideas. I suppose I didnt get into it seriously until I wrote my first book, Fads and Fallacies in the Name of Science. I was influenced by the Dianetics movement, now called Scientology, which was then promoted by John Campbell in Astounding Science Fiction. I was astonished at how rapidly the thing had become a cult.

Everybody is pathological to a certain degree... the more so the elevated his standing... only myth and cliche have that a person must be either sane or crazy.

Fires from beneath, and meteors from above,
Portentous, unexampled, unexplain'd,
Have kindled beacons in the skies; and th' old
And crazy earth has had her shaking fits
More frequent, and foregone her usual rest.
Is it a time to wrangle, when the props
And pillars of our planet seem to fail,
And nature, with a dim and sickly eye,
To wait the close of all?
Alluding the meteors of 17 Aug 1883.

Grossmann, you must help me, or else Ill go crazy!

Heres to the crazy ones. The misfits. The rebels. The troublemakers. The round heads in the square holes. The ones who see things differently. Theyre not fond of rules. You can quote them. Disagree with them. Glorify or vilify them. But the only thing you cant do is ignore them. Because they change things. They push the human race forward. And while some may see them as the crazy ones, we see genius. Because the people who are crazy enough to think they can change the world, are the ones who do.

In Apple Computer newspaper advertisement (1997) as quoted and cited in Tad Lathrop and Jim Pettigrew, This Business of Music Marketing and Promotion (1999), 55.

Humanity is about to learn that a lunatic (touched by the moon) is not a crazy man but one so sane, well-informed, well-coordinated, self-disciplined, cooperative and fearless as to be the first earthian human to have been ferried to a physical landing upon the moon, and thereafter to have been returned safely to reboard his mother space vehicle earth.

I respect Kirkpatrick both for his sponges and for his numinous nummulosphere. It is easy to dismiss a crazy theory with laughter that debars any attempt to understand a mans motivationand the nummulosphere is a crazy theory. I find that few men of imagination are not worth my attention. Their ideas may be wrong, even foolish, but their methods often repay a close study ... The different drummer often beats a fruitful tempo.

If the world goes crazy for a lovely fossil, that's fine with me. But if that fossil releases some kind of mysterious brain ray that makes people say crazy things and write lazy articles, a serious swarm of flies ends up in my ointment.

Criticism of excessive media hype about a fossil discovery, from blog 'The Loom' (19 May 2009) on Discover magazine website.

Imagine if trees gave free WIFI. Wed all be planting them like crazy. Its a pity they only give us the oxygen we breathe.

In a notable family called Stein
There were Gertrude, and Ep, and then Ein.
Gert's writing was hazy,
Ep's statues were crazy,
And nobody understood Ein. 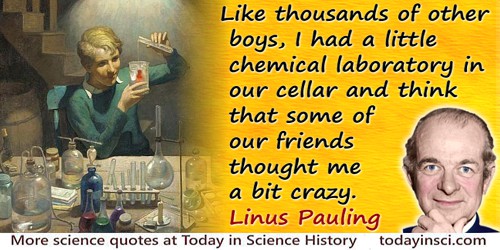 Like thousands of other boys, I had a little chemical laboratory in our cellar and think that some of our friends thought me a bit crazy.

Most of the crackpot papers which are submitted to The Physical Review are rejected, not because it is impossible to understand them, but because it is possible. Those which are impossible to understand are usually published. When the great innovation appears, it will almost certainly be in a muddled, incomplete and confusing form. To the discoverer himself it will be only half-understood; to everybody else it will be a mystery. For any speculation which does not at first glance look crazy, there is no hope.

People ask me often [whether] the Nobel Prize [was] the thing you were aiming for all your life, and I say that would be crazy. Nobody would aim for a Nobel Prize because, if you didnt get it, your whole life would be wasted. What we were aiming at was getting people well, and the satisfaction of that is much greater than any prize you can get.

Since my mother is the type that's called schizophrenogenic in the literature—she's the one who makes crazy people, crazy children—I was awfully curious to find out why I didn't go insane.

Some people think Wheelers gotten crazy in his later years, but hes always been crazy.

The crack-brained bobolink courts his crazy mate,
Posed on a bulrush tipsy with his weight.

The supposed astronomical proofs of the theory [of relativity], as cited and claimed by Einstein, do not exist. He is a confusionist. The Einstein theory is a fallacy. The theory that ether does not exist, and that gravity is not a force but a property of space can only be described as a crazy vagary, a disgrace to our age.

Quoted in Elizabeth Dilling, A "Who's Who" and Handbook of Radicalism for Patriots (1934), 49.

This beast is best felt. Shake, rattle, and roll. We are thrown left and right against our straps in spasmodic little jerks. It is steering like crazy, like a nervous lady driving a wide car down a narrow alley, and I just hope it knows where its going, because for the first ten seconds we are perilously close to that umbilical tower.

We all agreed that your theory is crazy. The question which divides us is whether it is crazy enough to have a chance of being correct.

In The Ambidextrous Universe by Martin Gardner (1964).

Whenever you look at a piece of work and you think the fellow was crazy, then you want to pay some attention to that. One of you is likely to be, and you had better find out which one it is. It makes an awful lot of difference.

Your theory is crazy...but its not crazy enough to be true.