And so many think incorrectly that everything was created by the Creator in the beginning as it is seen, that not only the mountains, valleys, and waters, but also various types of minerals occurred together with the rest of the world, and therefore it is said that it is unnecessary to investigate the reasons why they differ in their internal properties and their locations. Such considerations are very dangerous for the growth of all the sciences, and hence for natural knowledge of the Earth, particularly the art of mining, though it is very easy for those clever people to be philosophers, having learnt by heart the three words 'God so created' and to give them in reply in place of all reasons.

I think that a particle must have a separate reality independent of the measurements. That is an electron has spin, location and so forth even when it is not being measured. I like to think that the moon is there even if I am not looking at it.

No other animals have ever lighted fires as far as we can tell. In field archeology, a charcoal deposit found in such a location that it could not have been made by a forest fire is taken as conclusive evidence of man. A circular dark disk in the soil five or six feet in diameter is such a find.  With  modern radioactive dating methods, we can trace mans history.

Now do you not see that the eye embraces the beauty of the whole world? It counsels and corrects all the arts of mankind... it is the prince of mathematics, and the sciences founded on it are absolutely certain. It has measured the distances and sizes of the stars it has discovered the elements and their location... it has given birth to architecture and to perspective and to the divine art of painting.

Now that we locate them [genes] in the chromosomes are we justified in regarding them as material units; as chemical bodies of a higher order than molecules? Frankly, these are questions with which the working geneticist has not much concern himself, except now and then to speculate as to the nature of the postulated elements. There is no consensus of opinion amongst geneticists as to what the genes are—whether they are real or purely fictitious—because at the level at which the genetic experiments lie, it does not make the slightest difference whether the gene is a hypothetical unit, or whether the gene is a material particle. In either case the unit is associated with a specific chromosome, and can be localized there by purely genetic analysis. Hence, if the gene is a material unit, it is a piece of chromosome; if it is a fictitious unit, it must be referred to a definite location in a chromosome—the same place as on the other hypothesis. Therefore, it makes no difference in the actual work in genetics which point of view is taken. Between the characters that are used by the geneticist and the genes that his theory postulates lies the whole field of embryonic development.

The discovery in 1846 of the planet Neptune was a dramatic and spectacular achievement of mathematical astronomy. The very existence of this new member of the solar system, and its exact location, were demonstrated with pencil and paper; there was left to observers only the routine task of pointing their telescopes at the spot the mathematicians had marked.

Then if the first argument remains secure (for nobody will produce a neater one, than the length of the periodic time is a measure of the size of the spheres), the order of the orbits follows this sequence, beginning from the highest: The first and highest of all is the sphere of the fixed stars, which contains itself and all things, and is therefore motionless. It is the location of the universe, to which the motion and position of all the remaining stars is referred. For though some consider that it also changes in some respect, we shall assign another cause for its appearing to do so in our deduction of the Earth's motion. There follows Saturn, the first of the wandering stars, which completes its circuit in thirty years. After it comes Jupiter which moves in a twelve-year long revolution. Next is Mars, which goes round biennially. An annual revolution holds the fourth place, in which as we have said is contained the Earth along with the lunar sphere which is like an epicycle. In fifth place Venus returns every nine months. Lastly, Mercury holds the sixth place, making a circuit in the space of eighty days. In the middle of all is the seat of the Sun. For who in this most beautiful of temples would put this lamp in any other or better place than the one from which it can illuminate everything at the same time? Aptly indeed is he named by some the lantern of the universe, by others the mind, by others the ruler. Trismegistus called him the visible God, Sophocles' Electra, the watcher over all things. Thus indeed the Sun as if seated on a royal throne governs his household of Stars as they circle around him. Earth also is by no means cheated of the Moon's attendance, but as Aristotle says in his book On Animals the Moon has the closest affinity with the Earth. Meanwhile the Earth conceives from the Sun, and is made pregnant with annual offspring. We find, then, in this arrangement the marvellous symmetry of the universe, and a sure linking together in harmony of the motion and size of the spheres, such as could be perceived in no other way. For here one may understand, by attentive observation, why Jupiter appears to have a larger progression and retrogression than Saturn, and smaller than Mars, and again why Venus has larger ones than Mercury; why such a doubling back appears more frequently in Saturn than in Jupiter, and still more rarely in Mars and Venus than in Mercury; and furthermore why Saturn, Jupiter and Mars are nearer to the Earth when in opposition than in the region of their occultation by the Sun and re-appearance. Indeed Mars in particular at the time when it is visible throughout the night seems to equal Jupiter in size, though marked out by its reddish colour; yet it is scarcely distinguishable among stars of the second magnitude, though recognized by those who track it with careful attention. All these phenomena proceed from the same course, which lies in the motion of the Earth. But the fact that none of these phenomena appears in the fixed stars shows their immense elevation, which makes even the circle of their annual motion, or apparent motion, vanish from our eyes.

To learn the ordinary arrangement of the different strata of minerals in the earth, to know from their habitual colocations and proximities, where we find one mineral; whether another, for which we are seeking, may be expected to be in its neighborhood, is useful.

When you repeat an old pattern in a new location, you sometimes make something new. 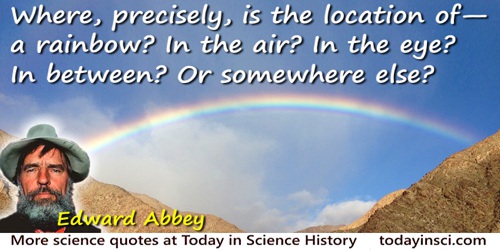 Where, precisely, is the location ofa rainbow? In the air? In the eye? In between? Or somewhere else?