A complete theory of evolution must acknowledge a balance between external forces of environment imposing selection for local adaptation and internal forces representing constraints of inheritance and development. Vavilov placed too much emphasis on internal constraints and downgraded the power of selection. But Western Darwinians have erred equally in practically ignoring (while acknowledging in theory) the limits placed on selection by structure and developmentwhat Vavilov and the older biologists would have called laws of form.

A scientist who would know the laws of nature must sit passively before nature. He may not dictate to nature its laws, nor may he impose his own intelligence upon nature; rather, the more passive he is before nature, the more nature will reveal its secrets.

Could the waters of the Atlantic be drawn off so as to expose to view this great seagash which separates continents, and extends from the Arctic to the Antarctic, it would present a scene the most rugged, grand and imposing. The very ribs of the solid earth, with the foundations of the sea, would be brought to light.

Einsteins space is no closer to reality than Van Goghs sky. The glory of science is not in a truth more absolute than the truth of Bach or Tolstoy, but in the act of creation itself. The scientists discoveries impose his own order on chaos, as the composer or painter imposes his; an order that always refers to limited aspects of reality, and is based on the observer's frame of reference, which differs from period to period as a Rembrandt nude differs from a nude by Manet.

Facts are not pure unsullied bits of information; culture also influences what we see and how we see it. Theories, moreover, are not inexorable inductions from facts. The most creative theories are often imaginative visions imposed upon facts; the source of imagination is also strongly cultural.

I do not think we can impose limits on research. Through hundreds of thousands of years, mans intellectual curiosity has been essential to all the gains we have made. Although in recent times we have progressed from chance and hit-or-miss methods to consciously directed research, we still cannot know in advance what the results may be. It would be regressive and dangerous to trammel the free search for new forms of truth.

If I choose to impose individual blame for all past social ills, there will be no one left to like in some of the most fascinating periods of our history. For example ... if I place every Victorian anti-Semite beyond the pale of my attention, my compass of available music and literature will be pitifully small. Though I hold no shred of sympathy for active persecution, I cannot excoriate individuals who acquiesced passively in a standard societal judgment. Rail instead against the judgment, and try to understand what motivates men of decent will.

In the endeavor to clearly comprehend and explain the functions of the combination of forces called brain, the physiologist is hindered and troubled by the views of the nature of those cerebral forces which the needs of dogmatic theology have imposed on mankind.

It appears  [Descartes] has inverted the order of philosophising,  it seemed good to him not to learn from things, but to impose his own laws on things. First he collected  truths which he thought suitable ; and then gradually advanced to particulars explicable from principles which  he had framed without consulting Nature.

It is not nature which imposes time and space upon us, it is we who impose them upon nature because we find them convenient.

Mathematics  is mans own handiwork, subject only to the limitations imposed by the laws of thought.

Progress imposes not only new possibilities for the future but new restrictions.

Technocrats are turning us into daredevils. The haphazard gambles they are imposing on us too often jeopardize our safety for goals that do not advance the human cause but undermine it. By staking our lives on their schemes, decision makers are not meeting the mandate of a democratic society; they are betraying it. They are not ennobling us; they are victimizing us. And, in acquiescing to risks that have resulted in irreversible damage to the environment, we ourselves are not only forfeiting our own rights as citizens. We are, in turn, victimizing the ultimate nonvolunteers: the defenseless, voicelessvotelesschildren of the future.

In Jacques Cousteau and Susan Schiefelbein, The Human, the Orchid, and the Octopus: Exploring and Conserving Our Natural World (2007), 85.

The chief aim of all investigations of the external world should be to discover the rational order and harmony which has been imposed on it by God and which He revealed to us in the language of mathematics.

Epigraph, without citation, in Morris Kline, Mathematical Thought from Ancient to Modern Times (1972), 231. Need primary source. Can you help?

The great thing [about Kants philosophy] was to form the idea that this one thingmind or worldmay well be capable of other forms of appearance that we cannot grasp and that do not imply the notions of space and time. This means an imposing liberation from our inveterate prejudice. 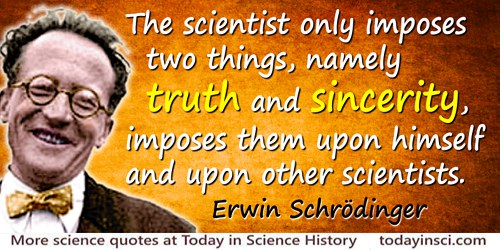 The scientist only imposes two things, namely truth and sincerity, imposes them upon himself and upon other scientists.

In Lecture, 'The Principle of Objectivation', the Tarner Lectures Delivered at Trinity College, Cambridge (Oct 1956), published in Mind and Matter (1958), 37.

Words change their meanings, just as organism s evolve. We would impose an enormous burden on our economy if we insisted on payment in cattle every time we identified a bonus as a pecuniary advantage (from the Latin pecus, or cattle, a verbal fossil from a former commercial reality).