About the use of language: it is impossible to sharpen a pencil with a blunt axe. It is equally vain to try to do it with ten blunt axes instead. 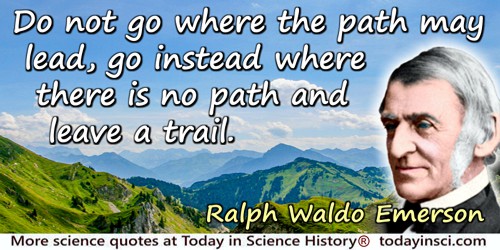 Do not go where the path may lead, go instead where there is no path and leave a trail.

I am pessimistic about the human race because it is too ingenious for its own good. Our approach to nature is to beat it into submission. We would stand a better chance of survival if we accommodated ourselves to this planet and viewed it appreciatively instead of skeptically and dictatorially.

I find it quite improbable that such order came out of chaos. There has to be some organizing principle. God to me is a mystery, but is the explanation for the miracle of existence, why there is something instead of nothing.

If I choose to impose individual blame for all past social ills, there will be no one left to like in some of the most fascinating periods of our history. For example ... if I place every Victorian anti-Semite beyond the pale of my attention, my compass of available music and literature will be pitifully small. Though I hold no shred of sympathy for active persecution, I cannot excoriate individuals who acquiesced passively in a standard societal judgment. Rail instead against the judgment, and try to understand what motivates men of decent will.

If you want to build a ship, dont recruit the men to gather the wood, divide the work and give orders. Instead, teach them to yearn for vast and endless sea.

Not found as such in a work by Saint-Exupéry. Probably an anonymous paraphrase of a related passage in Citadelle (1948), section 75, 687. See the quote beginning, One will weave the canvas on the Antoine de Saint-Exupéry Quotes page of this website.

It doesnt take a scientist to realize that a chimpanzee or a dog is an intelligent animal. Instead, it takes a bigoted human to suggest that its not.

Money never made a man happy yet, nor will it. There is nothing in its nature to produce happiness. The more a man has, the more he wants. Instead of filling a vacuum, it makes one.

Science cannot answer the deepest questions. As soon as you ask why is there something instead of nothing, you have gone beyond science.

Science is now the craft of the manipulation, substitution and deflection of the forces of nature. What I see coming is a gigantic slaughterhouse, an Auschwitz, in which valuable enzymes, hormones, and so on will be extracted instead of gold teeth.

The mediocre mind is incapable of understanding the man who refuses to bow blindly to conventional prejudices and chooses instead to express his opinions courageously and honestly.

The scientists of today think deeply instead of clearly. One must be sane to think clearly, but one can think deeply and be quite insane.

In 'Radio Power Will Revolutionize the World', Modern Mechanix and Inventions (Jul 1934), 117.

The use of traveling is to regulate the imagination by reality, and instead of thinking how things may be, to see them as they are.

[American] Fathers are spending too much time taking care of babies. No other civilization ever let responsible and important men spend their time in this way. They should not be involved in household details. They should take the children on trips, explore with them and talk things over. Men today have lost something by turning towards the home instead of going out of it.