A strange feeling of complete, almost solemn contentment suddenly overcame me when the descent module landed, rocked, and stilled. The weather was foul, but I smelled Earth, unspeakably sweet and intoxicating. And wind. Now utterly delightful; wind after long days in space.

Apart from its healthful mental training as a branch of ordinary education, geology as an open-air pursuit affords an admirable training in habits of observation, furnishes a delightful relief from the cares and routine of everyday life, takes us into the open fields and the free fresh face of nature, leads us into all manner of sequestered nooks, whither hardly any other occupation or interest would be likely to send us, sets before us problems of the highest interest regarding the history of the ground beneath our feet, and thus gives a new charm to scenery which may be already replete with attractions.

Geology ... offers always some material for observation. ... [When] spring and summer come round, how easily may the hammer be buckled round the waist, and the student emerge from the dust of town into the joyous air of the country, for a few delightful hours among the rocks.

Instead of being presented with stereotypes by age, sex, color, class, or religion, children must have the opportunity to learn that within each range, some people are loathsome and some are delightful.

It is a most beautiful and delightful sight to behold the body of the moon.

It is a serious question whether America, following Englands lead, has not gone into problem-solving too extensively. Certain it is that we are producing no text-books in which the theory is presented in the delightful style which characterizes many of the French works  , or those of the recent Italian school, or, indeed, those of the continental writers in general.

It may well be doubted whether, in all the range of Science, there is any field so fascinating to the explorerso rich in hidden treasuresso fruitful in delightful surprisesas that of Pure Mathematics. The charm lies chiefly, I think, in the absolute certainty of its results: for that is what, beyond all mental treasures, the human intellect craves for. Let us only be sure of something! More light, more light  And if our fate be death, give light and let us die This is the cry that, through all the ages, is going up from perplexed Humanity, and Science has little else to offer, that will really meet the demands of its votaries, than the conclusions of Pure Mathematics.

Opening of 'Introduction', A New Theory of Parallels (1890), xv. As a non-fiction work, the authors name on the title page of this book was Charles Lutwidge Dodgson. Being better known for his works of fiction as Lewis Carroll, all quotes relating to this one person, published under either name, are gathered on this single web page under his pen name. 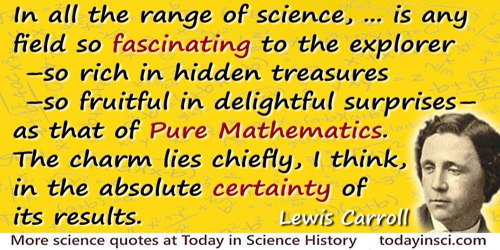 It may well be doubted whether, in all the range of science, there is any field so fascinating to the explorerso rich in hidden treasuresso fruitful in delightful surprisesas that of Pure Mathematics. The charm lies chiefly, I think, in the absolute certainty of its results; for that is what, beyond all mental treasures, the human intellect craves for. Let us only be sure of something! More light, more light!

Written without pseudonym as Charles L. Dodgson. Opening remarks in Introduction to A New Theory of Parallels (1888, 1890), xv.

Mathematics make the mind attentive to the objects which it considers. This they do by entertaining it with a great variety of truths, which are delightful and evident, but not obvious. Truth is the same thing to the understanding as music to the ear and beauty to the eye. The pursuit of it does really as much gratify a natural faculty implanted in us by our wise Creator as the pleasing of our senses: only in the former case, as the object and faculty are more spiritual, the delight is more pure, free from regret, turpitude, lassitude, and intemperance that commonly attend sensual pleasures.

Nature is so delightful and abundant in its variations that there would not be one that resembles another, and not only plants as a whole, but among their branches, leaves and fruit, will not be found one which is precisely like another.

Our sight is the most perfect and most delightful of all our senses.

We come therefore now to that knowledge whereunto the ancient oracle directeth us, which is the knowledge of ourselves; which deserveth the more accurate handling, by how much it toucheth us more nearly. This knowledge, as it is the end and term of natural philosophy in the intention of man, so notwithstanding it is but a portion of natural philosophy in the continent of nature. And generally let this be a rule, that all partitions of knowledges be accepted rather for lines and veins, than for sections and separations; and that the continuance and entireness of knowledge be preserved. For the contrary hereof hath made particular sciences to become barren, shallow, and erroneous; while they have not been nourished and maintained from the common fountain. So we see Cicero the orator complained of Socrates and his school, that he was the first that separated philosophy and rhetoric; whereupon rhetoric became an empty and verbal art. So we may see that the opinion of Copernicus touching the rotation of the earth, which astronomy itself cannot correct because it is not repugnant to any of the phenomena, yet natural philosophy may correct. So we see also that the science of medicine, if it be destituted and forsaken by natural philosophy, it is not much better than an empirical practice. With this reservation therefore we proceed to Human Philosophy or Humanity, which hath two parts: the one considereth man segregate, or distributively; the other congregate, or in society. So as Human Philosophy is either Simple and Particular, or Conjugate and Civil. Humanity Particular consisteth of the same parts whereof man consisteth; that is, of knowledges that respect the Body, and of knowledges that respect the Mind. But before we distribute so far, it is good to constitute. For I do take the consideration in general and at large of Human Nature to be fit to be emancipate and made a knowledge by itself; not so much in regard of those delightful and elegant discourses which have been made of the dignity of man, of his miseries, of his state and life, and the like adjuncts of his common and undivided nature; but chiefly in regard of the knowledge concerning the sympathies and concordances between the mind and body, which, being mixed, cannot be properly assigned to the sciences of either.

[To elucidate using models] the different combining powers in elementary atoms, I  select my illustrations from that most delightful of games, croquet. Let the croquet balls represent our atoms, and let us distinguish the atoms of different elements by different colours. The white balls are hydrogen, the green ones chlorine atoms; the atoms of fiery oxygen are red, those of nitrogen, blue; the carbon atoms, lastly, are naturally represented by black balls. But we have, in addition, exhibit the different combining powers of these atoms  by screwing into the balls a number of metallic arms (tubes and pins), which correspond respectively to the combining powers of the atoms represented  to join the balls  in imitation of the atomic edifices represented.

I was reading an article about Mathematics. Perfectly pure mathematics. My own knowledge of mathematics stops at twelve times twelve, but I enjoyed that article immensely. I didnt understand a word of it; but facts, or what a man believes to be facts, are always delightful. That mathematical fellow believed in his facts. So do I. Get your facts first, andthe voice dies away to an almost inaudible dronethen you can distort em as much as you please.