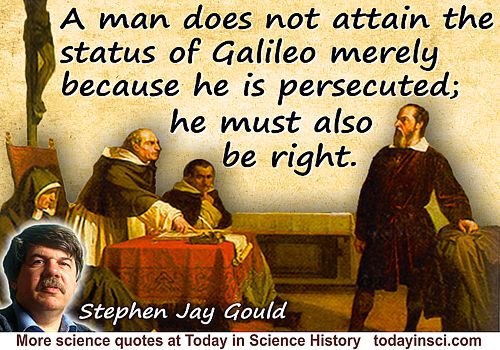 A man does not attain the status of Galileo merely because he is persecuted; he must also be right.

If the views we have ventured to advance be correct, we may almost consider {greek words} of the ancients to be realised in hydrogen, an opinion, by the by, not altogether new. If we actually consider the specific gravities of bodies in their gaseous state to represent the number of volumes condensed into one; or in other words, the number of the absolute weight of a single volume of the first matter ({greek words}) which they contain, which is extremely probable, multiples in weight must always indicate multiples in volume, and vice versa; and the specific gravities, or absolute weights of all bodies in a gaseous state, must be multiples of the specific gravity or absolute weight of the first matter, ({Greek words}), because all bodies in the gaseous state which unite with one another unite with reference to their volume.

'Correction of a Mistake in the Essay on the Relation between the Specific Gravities of Bodies in their Gaseous State and the Weights of their Atoms', Annals of Philosophy (1816), 7, 113.

It was shortly after midday on December 12, 1901, [in a hut on the cliffs at St. Johns, Newfoundland] that I placed a single earphone to my ear and started listening. The receiver on the table before me was very crudea few coils and condensers and a cohererno valves [vacuum tubes], no amplifiers, not even a crystal. I was at last on the point of putting the correctness of all my beliefs to test.  [The] answer came at 12:30.  Suddenly, about half past twelve there sounded the sharp click of the tapper  Unmistakably, the three sharp clicks corresponding to three dots sounded in my ear. Can you hear anything, Mr. Kemp? I asked, handing the telephone to my assistant. Kemp heard the same thing as I.  I knew then that I had been absolutely right in my calculations. The electric waves which were being sent out from Poldhu [Cornwall, England] had travelled the Atlantic, serenely ignoring the curvature of the earth which so many doubters considered a fatal obstacle.  I knew that the day on which I should be able to send full messages without wires or cables across the Atlantic was not far distant.

Psychologism is, I believe, correct only in so far as it insists upon what may be called methodological individualism as opposed to methodological collectivism; it rightly insists that the behaviour and the actions of collectives, such as states or social groups, must be reduced to the behaviour and to the actions of human individuals. But the belief that the choice of such an individualist method implies the choice of a psychological method is mistaken.

The apodictic quality of mathematical thought, the certainty and correctness of its conclusions, are due, not to a special mode of ratiocination, but to the character of the concepts with which it deals. What is that distinctive characteristic? I answer: precision, sharpness, completeness,* of definition. But how comes your mathematician by such completeness? There is no mysterious trick involved; some ideas admit of such precision, others do not; and the mathematician is one who deals with those that do.

In 'The Universe and Beyond', Hibbert Journal (1904-1905), 3, 309. An editorial footnote indicates precision, sharpness, completeness  i.e., in terms of the absolutely clear and indefinable.

The greatest of all spectral classifiers, Antonia Maury had two strikes on her: the biggest one was, she was a woman. A woman had no chance at anything in astronomy except at Harvard in the 1880s and 1890s. And even there, things were rough. It now turns out that her director, E.C. Pickering, did not like the way she classified; she then refused to change to suit him; and after her great publication in Harvard Annals 28 (1897), she left Harvard—and in a sense, astronomy. ... I would say the most remarkable phenomenological investigation in modern astronomy is Miss Maurys work in Harvard Annals 28. She didnt have anything astrophysical to go on. Investigations between 1890 and 1900 were the origin of astrophysics. But these were solar, mostly. And there Miss Maury was on the periphery. Ive seen pictures of groups, where shed be standing away a little bit to one side of the other people, a little bit in the background. It was a very sad thing. When Hertzsprung wrote Pickering to congratulate him on Miss Maurys work that had led to Hertzsprungs discovery of super giants, Pickering is supposed to have replied that Miss Maurys work was wrong  could not possibly be correct.

The hypotheses which we accept ought to explain phenomena which we have observed. But they ought to do more than this; our hypotheses ought to foretell phenomena which have not yet been observed; ... because if the rule prevails, it includes all cases; and will determine them all, if we can only calculate its real consequences. Hence it will predict the results of new combinations, as well as explain the appearances which have occurred in old ones. And that it does this with certainty and correctness, is one mode in which the hypothesis is to be verified as right and useful.

The union of the mathematician with the poet, fervor with measure, passion with correctness, this surely is the ideal.

There is no art so difficult as the art of observation: it requires a skillful, sober spirit and a well-trained experience, which can only be acquired by practice; for he is not an observer who only sees the thing before him with his eyes, but he who sees of what parts the thing consists, and in what connexion the parts stand to the whole. One person overlooks half from inattention; another relates more than he sees while he confounds it with that which he figures to himself; another sees the parts of the whole, but he throws things together that ought to be separated. ... When the observer has ascertained the foundation of a phenomenon, and he is able to associate its conditions, he then proves while he endeavours to produce the phenomena at his will, the correctness of his observations by experiment. To make a series of experiments is often to decompose an opinion into its individual parts, and to prove it by a sensible phenomenon. The naturalist makes experiments in order to exhibit a phenomenon in all its different parts. When he is able to show of a series of phenomena, that they are all operations of the same cause, he arrives at a simple expression of their significance, which, in this case, is called a Law of Nature. We speak of a simple property as a Law of Nature when it serves for the explanation of one or more natural phenomena.

'The Study of the Natural Sciences: An Introductory Lecture to the Course of Experimental Chemistry in the University of Munich, for the Winter Session of 1852-53,' as translated and republished in The Medical Times and Gazette (22 Jan 1853), N.S. Vol. 6, 82.