A complete and generous education fits a man to perform justly, skilfully and magnanimously all the offices of peace and war.

A skilful leech is better far than half a hundred men of war.

As arithmetic and algebra are sciences of great clearness, certainty, and extent, which are immediately conversant about signs, upon the skilful use whereof they entirely depend, so a little attention to them may possibly help us to judge of the progress of the mind in other sciences, which, though differing in nature, design, and object, may yet agree in the general methods of proof and inquiry.

But if any skillful minister of nature shall apply force to matter, and by design torture and vex it, in order to [effect] its annihilation, it, on the contrary being brought under this necessity, changes and transforms itself into a strange variety of shapes and appearances; for nothing but the power of the Creator can annihilate, or truly destroy it.

Does it not seem as if Algebra had attained to the dignity of a fine art, in which the workman has a free hand to develop his conceptions, as in a musical theme or a subject for a painting? It has reached a point where every properly developed algebraical composition, like a skillful landscape, is expected to suggest the notion of an infinite distance lying beyond the limits of the canvas.

Ever since celestial mechanics in the skillful hands of Leverrier and Adams led to the world-amazed discovery of Neptune, a belief has existed begotten of that success that still other planets lay beyond, only waiting to be found. 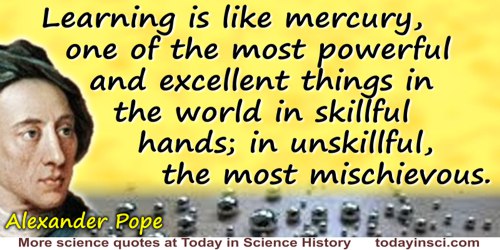 Learning is like mercury, one of the most powerful and excellent things in the world in skillful hands; in unskillful, the most mischievous.

Mathematics accomplishes really nothing outside of the realm of magnitude; marvellous, however, is the skill with which it masters magnitude wherever it finds it. We recall at once the network of lines which it has spun about heavens and earth; the system of lines to which azimuth and altitude, declination and right ascension, longitude and latitude are referred; those abscissas and ordinates, tangents and normals, circles of curvature and evolutes; those trigonometric and logarithmic functions which have been prepared in advance and await application. A look at this apparatus is sufficient to show that mathematicians are not magicians, but that everything is accomplished by natural means; one is rather impressed by the multitude of skilful machines, numerous witnesses of a manifold and intensely active industry, admirably fitted for the acquisition of true and lasting treasures. 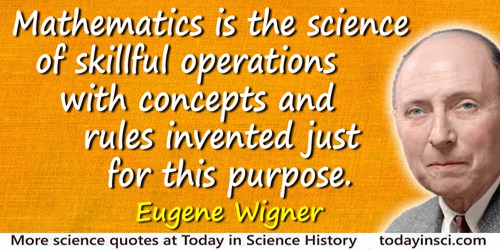 Mathematics is the science of skillful operations with concepts and rules invented just for this purpose.

Nevertheless if any skillful Servant of Nature shall bring force to bear on matter, and shall vex it and drive it to extremities as if with the purpose of reducing it to nothing, then will matter (since annihilation or true destruction is not possible except by the omnipotence of God) finding itself in these straits, turn and transform itself into strange shapes, passing from one change to another till it has gone through the whole circle and finished the period.

The history of semiconductor physics is not one of grand heroic theories, but one of painstaking intelligent labor. Not strokes of genius producing lofty edifices, but great ingenuity and endless undulation of hope and despair. Not sweeping generalizations, but careful judgment of the border between perseverance and obstinacy. Thus the history of solid-state physics in general, and of semiconductors in particular, is not so much about great men and women and their glorious deeds, as about the unsung heroes of thousands of clever ideas and skillful experimentsreflection of an age of organization rather than of individuality.

'Selected Topics from the History of Semiconductor Physics and Its Applications', in Lillian Hoddeson et al. (eds.), Out of the Crystal Maze (1992), 474.

There is no art so difficult as the art of observation: it requires a skillful, sober spirit and a well-trained experience, which can only be acquired by practice; for he is not an observer who only sees the thing before him with his eyes, but he who sees of what parts the thing consists, and in what connexion the parts stand to the whole. One person overlooks half from inattention; another relates more than he sees while he confounds it with that which he figures to himself; another sees the parts of the whole, but he throws things together that ought to be separated. ... When the observer has ascertained the foundation of a phenomenon, and he is able to associate its conditions, he then proves while he endeavours to produce the phenomena at his will, the correctness of his observations by experiment. To make a series of experiments is often to decompose an opinion into its individual parts, and to prove it by a sensible phenomenon. The naturalist makes experiments in order to exhibit a phenomenon in all its different parts. When he is able to show of a series of phenomena, that they are all operations of the same cause, he arrives at a simple expression of their significance, which, in this case, is called a Law of Nature. We speak of a simple property as a Law of Nature when it serves for the explanation of one or more natural phenomena.

'The Study of the Natural Sciences: An Introductory Lecture to the Course of Experimental Chemistry in the University of Munich, for the Winter Session of 1852-53,' as translated and republished in The Medical Times and Gazette (22 Jan 1853), N.S. Vol. 6, 82.

[In 18th-century Britain] engineers for the most began as simple workmen, skilful and ambitious but usually illiterate and self-taught. They were either millwrights like Bramah, mechanics like Murdoch and George Stephenson, or smiths like Newcomen and Maudslay.