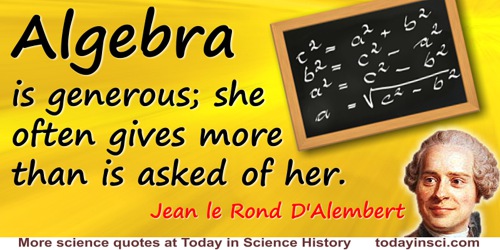 A complete and generous education fits a man to perform justly, skilfully and magnanimously all the offices of peace and war.

Algebra is generous; she often gives more than is asked of her.

But the Presidence of that mighty Power  its particular Agency and Concern therein: and its Purpose and Design  will more evidently appear, when I shall have proved  That the said Earth, though not indifferently and alike fertil in all parts of it, was yet generally much more fertil than ours is  That its Soil was more luxuriant, and teemed forth its Productions in far greater plenty and abundance than the present Earth does  That when Man was fallen, and had abandoned his primitive Innocence, the Case was much altered: and a far different Scene of Things presented; that generous Vertue, masculine Bravery, and prudent Circumspection which he was before Master of, now deserting him  and a strange imbecility immediately seized and laid hold of him: he became pusillanimous, and was easily ruffled with every little Passion within: supine, and as openly exposed to any Temptation or Assault from without. And now these exuberant Productions of the Earth became a continued Decoy and Snare unto him.

His [Erwin Schrödinger's] private life seemed strange to bourgeois people like ourselves. But all this does not matter. He was a most lovable person, independent, amusing, temperamental, kind and generous, and he had a most perfect and efficient brain.

In the following pages I offer nothing more than simple facts, plain arguments, and common sense; and have no other preliminaries to settle with the reader, than that he will divest himself of prejudice and repossession, and suffer his reason and feelings to determine for themselves; and that he will put on, or rather that he will not put off, the true character of man, and generously enlarge his view beyond the present day.

It is easy to be generous with someone elses money.

Aphorism as given by the fictional character Dezhnev Senior, in Fantastic Voyage II: Destination Brain (1987), 130.

Science in England is not a profession: its cultivators are scarcely recognised even as a class. Our language itself contains no single term by which their occupation can be expressed. We borrow a foreign word [Savant] from another country whose high ambition it is to advance science, and whose deeper policy, in accord with more generous feelings, gives to the intellectual labourer reward and honour, in return for services which crown the nation with imperishable renown, and ultimately enrich the human race.

SCIENCE! thou fair effusive ray
From the great source of mental Day,
Free, generous, and refin'd!
Descend with all thy treasures fraught,
Illumine each bewilder'd thought,
And bless my labour'g mind.

The blood, the fountain whence the spirits flow,
The generous stream that waters every part,
And motion, vigour, and warm life conveys
To every Particle that moves or lives;
This vital fluid, thro' unnumber'd tubes
Pour'd by the heart, and to the heart again
Refunded; scourg'd forever round and round;
Enrag'd with heat and toil, at last forgets
Its balmy nature; virulent and thin
It grows; and now, but that a thousand gates
Are open to its flight, it would destroy
The parts it cherish' d and repair'd before.
Besides, the flexible and tender tubes
Melt in the mildest, most nectareous tide
That ripening Nature rolls; as in the stream
Its crumbling banks; but what the vital force
Of plastic fluids hourly batters down,
That very force, those plastic particles
Rebuild: so mutable the state of man.
For this the watchful appetite was given,
Daily with fresh materials to repair
This unavoidable expense of life,
This necessary waste of flesh and blood.
Hence the concoctive powers, with various art,
Subdue the cruder aliments to chyle;
The chyle to blood; the foamy purple tide
To liquors, which through finer arteries
To different parts their winding course pursue;
To try new changes, and new forms put on,
Or for the public, or some private use.

The forest is a peculiar organism of unlimited kindness and benevolence that makes no demands for its sustenance and extends generously the products of its life activity; it provides protection to all beings, offering shade even to the axeman who destroys it.

The main thing that induces me to question the safeness of the vulgar methodus medendi in many cases is the consideration of the nature of those Helps they usually employ, and some of which are honoured with the title of Generous Remedies. These helps are Bleeding, Vomiting, Purging, Sweating, and Spitting, of which I briefly observe in General, that they are sure to weaken or discompose when they are imployed, but do not certainly cure afterwards.

The object of geometry in all its measuring and computing, is to ascertain with exactness the plan of the great Geometer, to penetrate the veil of material forms, and disclose the thoughts which lie beneath them? When our researches are successful, and when a generous and heaven-eyed inspiration has elevated us above humanity, and raised us triumphantly into the very presence, as it were, of the divine intellect, how instantly and entirely are human pride and vanity repressed, and, by a single glance at the glories of the infinite mind, are we humbled to the dust.

From 'Mathematical Investigation of the Fractions Which Occur in Phyllotaxis', Proceedings of the American Association for the Advancement of Science (1850), 2, 447, as quoted by R. C. Archibald in 'Benjamin Peirce: V. Biographical Sketch', The American Mathematical Monthly (Jan 1925), 32, No. 1, 12.

The value of fundamental research does not lie only in the ideas it produces. There is more to it. It affects the whole intellectual life of a nation by determining its way of thinking and the standards by which actions and intellectual production are judged. If science is highly regarded and if the importance of being concerned with the most up-to-date problems of fundamental research is recognized, then a spiritual climate is created which influences the other activities. An atmosphere of creativity is established which penetrates every cultural frontier. Applied sciences and technology are forced to adjust themselves to the highest intellectual standards which are developed in the basic sciences. This influence works in many ways: some fundamental students go into industry; the techniques which are applied to meet the stringent requirements of fundamental research serve to create new technological methods. The style, the scale, and the level of scientific and technical work are determined in pure research; that is what attracts productive people and what brings scientists to those countries where science is at the highest level. Fundamental research sets the standards of modern scientific thought; it creates the intellectual climate in which our modern civilization flourishes. It pumps the lifeblood of idea and inventiveness not only into the technological laboratories and factories, but into every cultural activity of our time. The case for generous support for pure and fundamental science is as simple as that.

In 'Why Pure Science?' in Bulletin of the Atomic Scientists, 1965.

There is scarce any one invention, which this nation has produced in our age, but it has some way or other been set forward by his assistance. ... He is indeed a man born for the good of mankind, and for the honour of his country. ... So I may thank God, that Dr. Wilkins was an Englishman, for wherever he had lived, there had been the chief seat of generous knowledge and true philosophy.

Until recently even the most generous assessment places the subject [of the origin of the universe] at the edges of objective inquiry if not entirely outside the scientific method.