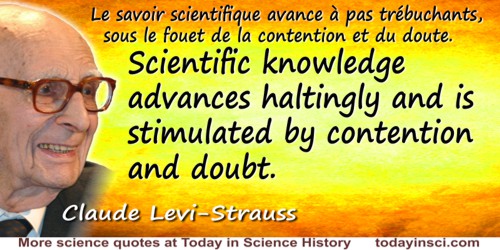 Original French in Mythologiques, Vol. 1, Le Cru et le Cuit (1964), 15. As translated by John and Doreen Weightman, The Raw and the Cooked (1969, 1990), 7. A more literal translation could be: â€śScientific knowledge advances with stumbling steps, under the whip of contention and doubt.â€ť

Anatomists have ever been engaged in contention. And indeed, if a man has not such a degree of enthusiasm, and love of the art, as will make him impatient of unreasonable opposition and of encroachments upon his discoveries and his reputation, he will hardly become considerable in Anatomy or in any branch of natural knowledge.

Meteorology has ever been an apple of contention, as if the violent commotions of the atmosphere induced a sympathetic effect on the minds of those who have attempted to study them.

Religions are tough. Either they make no contentions which are subject to disproof or they quickly redesign doctrine after disproof. â€¦ near the core of the religious experience is something remarkably resistant to rational inquiry.

The average English author [of mathematical texts] leaves one under the impression that he has made a bargain with his reader to put before him the truth, the greater part of the truth, and nothing but the truth; and that if he has put the facts of his subject into his book, however difficult it may be to unearth them, he has fulfilled his contract with his reader. This is a very much mistaken view, because effective teaching requires a great deal more than a bare recitation of facts, even if these are duly set forth in logical orderâ€”as in English books they often are not. The probable difficulties which will occur to the student, the objections which the intelligent student will naturally and necessarily raise to some statement of fact or theoryâ€”these things our authors seldom or never notice, and yet a recognition and anticipation of them by the author would be often of priceless value to the student. Again, a touch of humour (strange as the contention may seem) in mathematical works is not only possible with perfect propriety, but very helpful; and I could give instances of this even from the pure mathematics of Salmon and the physics of Clerk Maxwell.

The determining cause of most wars in the past has been, and probably will be of all wars in the future, the uncertainty of the result; war is acknowledged to be a challenge to the Unknown, it is often spoken of as an appeal to the God of Battles. The province of science is to foretell; this is true of every department of science. And the time must comeâ€”how soon we do not knowâ€”when the real science of war, something quite different from the application of science to the means of war, will make it possible to foresee with certainty the issue of a projected war. That will mark the end of battles; for however strong the spirit of contention, no nation will spend its money in a fight in which it knows it must lose.

The great mathematician, like the great poet or naturalist or great administrator, is born. My contention shall be that where the mathematic endowment is found, there will usually be found associated with it, as essential implications in it, other endowments in generous measure, and that the appeal of the science is to the whole mind, direct no doubt to the central powers of thought, but indirectly through sympathy of all, rousing, enlarging, developing, emancipating all, so that the faculties of will, of intellect and feeling learn to respond, each in its appropriate order and degree, like the parts of an orchestra to the â€śurge and ardorâ€ť of its leader and lord.

The major religions on the Earth contradict each other left and right. You canâ€™t all be correct. And what if all of you are wrong? Itâ€™s a possibility, you know. You must care about the truth, right? Well, the way to winnow through all the differing contentions is to be skeptical. Iâ€™m not any more skeptical about your religious beliefs than I am about every new scientific idea I hear about. But in my line of work, theyâ€™re called hypotheses, not inspiration and not revelation.

The man in the street will, therefore, twist the statement that the scientist has come to the end of meaning into the statement that the scientist has penetrated as far as he can with the tools at his command, and that there is something beyond the ken of the scientist. This imagined beyond, which the scientist has proved he cannot penetrate, will become the playground of the imagination of every mystic and dreamer. The existence of such a domain will be made the basis of an orgy of rationalizing. It will be made the substance of the soul; the spirits of the dead will populate it; God will lurk in its shadows; the principle of vital processes will have its seat here; and it will be the medium of telepathic communication. One group will find in the failure of the physical law of cause and effect the solution of the age-long problem of the freedom of the will; and on the other hand the atheist will find the justification of his contention that chance rules the universe.

The natural sciences are sometimes said to have no concern with values, nor to seek morality and goodness, and therefore belong to an inferior order of things. Counter-claims are made that they are the only living and dynamic studies... Both contentions are wrong. Language, Literature and Philosophy express, reflect and contemplate the world. But it is a world in which men will never be content to stay at rest, and so these disciplines cannot be cut off from the great searching into the nature of things without being deprived of life-blood.

The pursuit of mathematical science makes its votary appear singularly indifferent to the ordinary interests and cares of men. Seeking eternal truths, and finding his pleasures in the realities of form and number, he has little interest in the disputes and contentions of the passing hour. His views on social and political questions partake of the grandeur of his favorite contemplations, and, while careful to throw his mite of influence on the side of right and truth, he is content to abide the workings of those general laws by which he doubts not that the fluctuations of human history are as unerringly guided as are the perturbations of the planetary hosts.

Though, probably, no competent geologist would contend that the European classification of strata is applicable to all other parts of the globe, yet most, if not all geologists, write as though it were so.

[Concerning the Piltdown hoax,] that jaw has been literally a bone of contention for a long time.