All men who have achieved great things have been great dreamers.

All people dream, but not equally. Those who dream by night in the dusty recesses of their mind, wake in the morning to find that it was vanity. But the dreamers of the day are dangerous people, for they dream their dreams with open eyes, and make them come true.

All successful people are big dreamers. They imagine what their future could be, ideal in every respect, and then they work every day toward their distant vision, that goal or purpose. 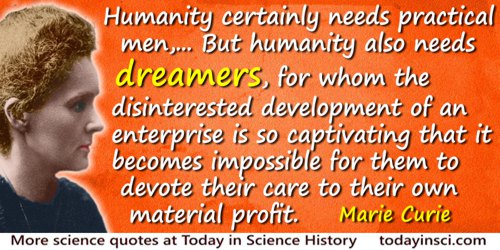 Humanity certainly needs practical men, who get the most out of their work, and, without forgetting the general good, safeguard their own interests. But humanity also needs dreamers, for whom the disinterested development of an enterprise is so captivating that it becomes impossible for them to devote their care to their own material profit. Without the slightest doubt, these dreamers do not deserve wealth, because they do not desire it. Even so, a well-organised society should assure to such workers the efficient means of accomplishing their task, in a life freed from material care and freely consecrated to research.

I think there is something more important than believing: Action! The world is full of dreamers, there arent enough who will move ahead and begin to take concrete steps to actualize their vision.

I would not leave anything to a man of action; as he would be tempted to give up work. On the other hand I would like to help dreamers as they find it difficult to get on in life.

A few months before his death. As translated and stated in H. Schück and Ragnar Sohlman, The Life of Alfred Nobel (1929), 241.

Is science visionary? Is it not the hardest-headed intellectual discipline we know? How, then, does science look at this universe? Always as a bundle of possibilities. Habitually the scientist looks at this universe and every area in it as a bundle of possibilities, with no telling what might come if we fulfilled the conditions. Thomas Edison was no dreamer. He was a seer. The possibilities that he brought out were factually there. They were there before he saw them. They would have been there if he never had seen them. Always the possibilities are part of the actualities in any given situation.

In 'Don't Lose Faith in Human Possibilities', collected in Living Under Tension: Sermons On Christianity Today (1941), 15.

Mother of all the sciences, it [mathematics] is a builder of the imagination, a weaver of patterns of sheer thought, an intuitive dreamer, a poet.

The man in the street will, therefore, twist the statement that the scientist has come to the end of meaning into the statement that the scientist has penetrated as far as he can with the tools at his command, and that there is something beyond the ken of the scientist. This imagined beyond, which the scientist has proved he cannot penetrate, will become the playground of the imagination of every mystic and dreamer. The existence of such a domain will be made the basis of an orgy of rationalizing. It will be made the substance of the soul; the spirits of the dead will populate it; God will lurk in its shadows; the principle of vital processes will have its seat here; and it will be the medium of telepathic communication. One group will find in the failure of the physical law of cause and effect the solution of the age-long problem of the freedom of the will; and on the other hand the atheist will find the justification of his contention that chance rules the universe.

The trouble is that all the investigators proceeded in exactly the same spirit, the spirit that is of scientific curiosity, and with no possibility of telling whether the issue of their work would prove them to be fiends, or dreamers, or angels.

'The Presidential Address: Part II Science and Warfare', Reports of the British Association for the Advancement of Science (1938), 18-9.

They think that differential equations are not reality. Hearing some colleagues speak, its as though theoretical physics was just playing house with plastic building blocks. This absurd idea has gained currency, and now people seem to feel that theoretical physicists are little more than dreamers locked away ivory towers. They think our games, our little houses, bear no relation to their everyday worries, their interests, their problems, or their welfare. But Im going to tell you something, and I want you to take it as a ground rule for this course. From now on I will be filling this board with equations.  And when I'm done, I want you to do the following: look at those numbers, all those little numbers and Greek letters on the board, and repeat to yourselves, This is reality, repeat it over and over.

We grow great by dreams. All big men are dreamers. They see things in the soft haze of a spring day or in the red fire of a long winters evening. Some of us let these great dreams die, but others nourish and protect them; nurse them through bad days till they bring them to the sunshine and light which comes always to those who sincerely hope that their dreams will come true.

Quoted, for example, in The American Exporter (1930), Vol. 106, 158. Webmaster has found this quote in numerous texts, but as yet has not identified the original. (Can you help?)

When we have fully discovered the scientific laws that govern life, we shall realise that one person who has more illusions than the dreamer is the man of action.