Act as if you are going to live for ever and cast your plans way ahead. You must feel responsible without time limitations, and the consideration of whether you may or may not be around to see the results should never enter your thoughts.

Cosmology does, I think, affect the way that we perceive humanityâ€™s role in nature. One thing weâ€™ve learnt from astronomy is that the future lying ahead is more prolonged than the past. Even our sun is less than halfway through its life.

I always keep two legs going, with one trying to reach ahead.

I think there is something more important than believing: Action! The world is full of dreamers, there arenâ€™t enough who will move ahead and begin to take concrete steps to actualize their vision.

Imagine a room awash in gasoline, and there are two implacable enemies in that room. One of them has nine thousand matches. The other has seven thousand matches. Each of them is concerned about who's ahead, who's stronger. Well that's the kind of situation we are actually in. The amount of weapons that are available to the United States and the Soviet Union are so bloated, so grossly in excess of what's needed to dissuade the other, that if it weren't so tragic, it would be laughable. What is necessary is to reduce the matches and to clean up the gasoline.

From Sagan's analogy about the nuclear arms race and the need for disarmament, during a panel discussion in ABC News Viewpoint following the TV movie The Day After (20 Nov 1983). Transcribed by Webmaster from a video recording. It is seen misquoted in summary form as â€śThe nuclear arms race is like two sworn enemies standing waist deep in gasoline, one with three matches, the other with five.â€ť

In every phase of business life, keep at least one year ahead of the other fellow.

In fulfilling the wants of the public, a manufacturer should keep as far ahead as his imagination and his knowledge of his buying public will let him. One should never wait to see what it is a customer is going to want. Give him, rather, what he needs, before he has sensed that need himself.

Junior high school seemed like a fine idea when we invented it but it turned out to be an invention of the devil. Weâ€™re catching our boys in a net in which theyâ€™re socially unprepared. We put them in junior high school with girls who are two years ahead of them. There isnâ€™t a thing they should have to do with girls at this age except growl at them.

My entire life consisted of musings, calculations, practical works and trials. Many questions remain unanswered; many works are incomplete or unpublished. The most important things still lie ahead. 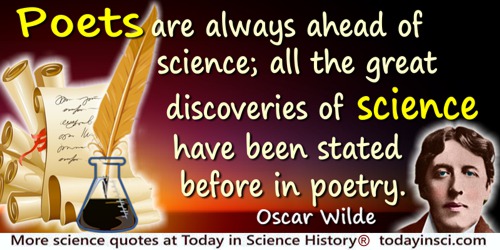 Poets are always ahead of science; all the great discoveries of science have been stated before in poetry.

There is no one who equals him [Edward Teller] for sheer, speed of thought. There may be better scientists, but none more brilliant. You always find him a thousand feet ahead of you.

To be successful be ahead of your time, but only a little.

We need people who can see straight ahead and deep into the problems. Those are the experts. But we also need peripheral vision and experts are generally not very good at providing peripheral vision.

When a scientist is ahead of his times, it is often through misunderstanding of current, rather than intuition of future truth. In science there is never any error so gross that it won't one day, from some perspective, appear prophetic.

When going ahead in space, it is also important to go back in time.

When the number of factors coming into play in a phenomenological complex is too large, scientific method in most cases fails us. One need only think of the weather, in which case prediction even for a few days ahead is impossible. Nevertheless no one doubts that we are confronted with a causal connection whose causal components are in the main known to us.