Accountants and second-rate business school jargon are in the ascendant. Costs, which rise rapidly, and are easily ascertained and comprehensible, now weigh more heavily in the scales than the unquantifiable and unpredictable values and future material progress. Perhaps science will only regain its lost primacy as peoples and government begin to recognize that sound scientific work is the only secure basis for the construction of policies to ensure the survival of Mankind without irreversible damage to Planet Earth.

And, in this case, science could learn an important lesson from the literatiwho love contingency for the same basic reason that scientists tend to regard the theme with suspicion. Because, in contingency lies the power of each person, to make a difference in an unconstrained world bristling with possibilities, and nudgeable by the smallest of unpredictable inputs into markedly different channels spelling either vast improvement or potential disaster.

As a scientist, I am not sure anymore that life can be reduced to a class struggle, to dialectical materialism, or any set of formulas. Life is spontaneous and it is unpredictable, it is magical. I think that we have struggled so hard with the tangible that we have forgotten the intangible.

If we lived on a planet where nothing ever changed, there would be little to do. There would be nothing to figure out. There would be no impetus for science. And if we lived in an unpredictable world, where things changed in random or very complex ways, we would not be able to figure things out. But we live in an in-between universe, where things change, but according to patterns, rules, or as we call them, laws of nature. If I throw a stick up in the air, it always falls down. If the sun sets in the west, it always rises again the next morning in the east. And so it becomes possible to figure things out. We can do science, and with it we can improve our lives. 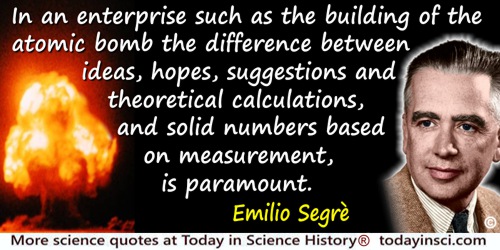 In an enterprise such as the building of the atomic bomb the difference between ideas, hopes, suggestions and theoretical calculations, and solid numbers based on measurement, is paramount. All the committees, the politicking and the plans would have come to naught if a few unpredictable nuclear cross sections had been different from what they are by a factor of two.

In this physical world there is no real chaos; all is in fact orderly; all is ordered by the physical principles. Chaos is but unperceived order- it is a word indicating the limitations of the human mind and the paucity of observational facts. The words chaos, accidental, chance, unpredictable," are conveniences behind which we hide our ignorance.

It is the individual only who is timeless. Societies, cultures, and civilizations - past and present - are often incomprehensible to outsiders, but the individuals hunger, anxieties, dreams, and preoccupations have remained unchanged through the millennia. Thus, we are up against the paradox that the individual who is more complex, unpredictable, and mysterious than any communal entity is the one nearest to our understanding; so near that even the interval of millennia cannot weaken our feeling of kinshiIf in some manner the voice of an individual reaches us from the remotest distance of time, it is a timeless voice speaking about ourselves.

Mathematicians  believed that prediction was just a function of keeping track of things. If you knew enough, you could predict anything.  Chaos theory throws it right out the window because  in fact there are great categories of phenomena that are inherently unpredictable.

Organisms ... are directed and limited by their past. They must remain imperfect in their form and function, and to that extent unpredictable since they are not optimal machines. We cannot know their future with certainty, if only because a myriad of quirky functional shifts lie within the capacity of any feature, however well adapted to a present role.

Plasma seems to have the kinds of properties one would like for life. Its somewhat like liquid waterunpredictable and thus able to behave in an enormously complex fashion. It could probably carry as much information as DNA does. It has at least the potential for organizing itself in interesting ways.

The so-called science of poll-taking is not a science at all but mere necromancy. People are unpredictable by nature, and although you can take a nation's pulse, you can't be sure that the nation hasn't just run up a flight of stairs, and although you can take a nation's blood pressure, you cant be sure that if you came back in twenty minutes youd get the same reading. This is a damn fine thing. .