[Attributing the origin of life to spontaneous generation.] However improbable we regard this event, it will almost certainly happen at least once. The time is of the order of two billion years. Given so much time, the impossible becomes possible, the possible probable, and the probable virtually certain. One only has to wait: time itself performs the miracles.

A chemical compound once formed would persist for ever, if no alteration took place in surrounding conditions. But to the student of Life the aspect of nature is reversed. Here, incessant, and, so far as we know, spontaneous change is the rule, rest the exceptionthe anomaly to be accounted for. Living things have no inertia and tend to no equilibrium.

A thing is either alive or it isnt; there is nothing that is almost alive. There is but the remotest possibility of the origin of life by spontaneous generation, and every likelihood that Arrhenius is right when he dares to claim that life is a cosmic phenomenon, something that drifts between the spheres, like light, and like light transiently descends upon those fit to receive it.

And, notwithstanding a few exceptions, we do undoubtedly find that the most truly eminent men have had not only their affections, but also their intellect, greatly influenced by women. I will go even farther; and I will venture to say that those who have not undergone that influence betray a something incomplete and mutilated. We detect, even in their genius, a certain frigidity of tone; and we look in vain for that burning fire, that gushing and spontaneous nature with which our ideas of genius are indissolubly associated. Therefore, it is, that those who are most anxious that the boundaries of knowledge should be enlarged, ought to be most eager that the influence of women should be increased, in order that every resource of the human mind may be at once and quickly brought into play.

Lecture (19 Mar 1858) at the Royal Institution, 'The Influence Of Women On The Progress Of Knowledge', collected in The Miscellaneous and Posthumous Works of Henry Thomas Buckle (1872), Vol. 1, 17. Published in Fraziers Magazine (Apr 1858).

As a scientist, I am not sure anymore that life can be reduced to a class struggle, to dialectical materialism, or any set of formulas. Life is spontaneous and it is unpredictable, it is magical. I think that we have struggled so hard with the tangible that we have forgotten the intangible.

Far from attempting to control science, few among the general public even seem to recognize just what science entails. Because lethal technologies seem to spring spontaneously from scientific discoveries, most people regard dangerous technology as no more than the bitter fruit of science, the real root of all evil.

In Jacques Cousteau and Susan Schiefelbein, The Human, the Orchid, and the Octopus: Exploring and Conserving Our Natural World (2007), 181.

In this great society wide lying around us, a critical analysis would find very few spontaneous actions. It is almost all custom and gross sense.

It is a natural inquiry to askTo what most nearly are these new phenomena [the newly-born science of radioactivity and the spontaneous disintegration of elements] correlated? Is it possible to give, by the help of an analogy to familiar phenomena, any correct idea of the nature of this new phenomenon Radioactivity? The answer may surprise those who hold to the adage that there is nothing new under the sun. Frankly, it is not possible, because in these latest developments science has broken fundamentally new ground, and has delved one distinct step further down into the foundations of knowledge.

In The Interpretation of Radium: Being the Substance of Six Free Popular Lectures Delivered at the University of Glasgow (1909, 1912), 2. The original lectures of early 1908, were greatly edited, rearranged and supplemented by the author for the book form.

Life is order, death is disorder. A fundamental law of Nature states that spontaneous chemical changes in the universe tend toward chaos. But life has, during milliards of years of evolution, seemingly contradicted this law. With the aid of energy derived from the sun it has built up the most complicated systems to be found in the universeliving organisms. Living matter is characterized by a high degree of chemical organisation on all levels, from the organs of large organisms to the smallest constituents of the cell. The beauty we experience when we enjoy the exquisite form of a flower or a bird is a reflection of a microscopic beauty in the architecture of molecules.

Mathematical discoveries, small or great  are never born of spontaneous generation. They always presuppose a soil seeded with preliminary knowledge and well prepared by labour, both conscious and subconscious.

One never finds fossil bones bearing no resemblance to human bones. Egyptian mummies, which are at least three thousand years old, show that men were the same then. The same applies to other mummified animals such as cats, dogs, crocodiles, falcons, vultures, oxen, ibises, etc. Species, therefore, do not change by degrees, but emerged after the new world was formed. Nor do we find intermediate species between those of the earlier world and those of today's. For example, there is no intermediate bear between our bear and the very different cave bear. To our knowledge, no spontaneous generation occurs in the present-day world. All organized beings owe their life to their fathers. Thus all records corroborate the globe's modernity. Negative proof: the barbaritY of the human species four thousand years ago. Positive proof: the great revolutions and the floods preserved in the traditions of all peoples.

Orgel's First Rule: Whenever a spontaneous process is too slow or too inefficient a protein will evolve to speed it up or make it more efficient.

Scientific modes of thought cannot be developed and become generally accepted unless people renounce their primary, unreflecting, and spontaneous attempt to understand all their experience in terms of its purpose and meaning for themselves. The development that led to more adequate knowledge and increasing control of nature was therefore, considered from one aspect, also a development toward greater self-control by men.

The Civilizing Process: The Development of MannersChanges in the Code of Conduct and Feeling in Early Modern Times (1939), trans. Edmund Jephcott (1978), 225. Originally published as Über den Prozess der Zivilisation.

Scientists have long been baffled by the existence of spontaneous order in the universe. The laws of thermodynamics seem to dictate the opposite, that nature should inexorably degenerate toward a state of greater disorder, greater entropy. Yet all around

John Mitchinson and John Lloyd, If Ignorance Is Bliss, Why Aren't There More Happy People?: Smart Quotes for Dumb Times (2009), 274.

Spontaneous generation is a chimera.

Spontaneous generation, to put the matter simply, takes place in smaller plants, especially in those that are annuals and herbaceous. But still it occasionally occurs too in larger plants whenever there is rainy weather or some peculiar condition of air or soil; for thus it is said that the silphium sprang up in Libya when a murky and heavy sort of wet weather condition occurred, and that the timber growth which is now there has come from some similar reason or other; for it was not there in former times.

The extracellular genesis of cells in animals seemed to me, ever since the publication of the cell theory [of Schwann], just as unlikely as the spontaneous generation of organisms. These doubts produced my observations on the multiplication of blood cells by division in bird and mammalian embryos and on the division of muscle bundles in frog larvae. Since then I have continued these observations in frog larvae, where it is possible to follow the history of tissues back to segmentation.

The highest and best form of efficiency is the spontaneous cooperation of a free people. 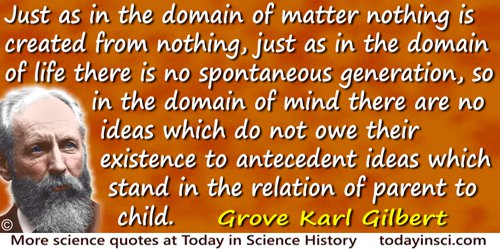 The mental process by which hypotheses are suggested is obscure. Ordinarily they flash into consciousness without premonition, and it would he easy to ascribe them to a mysterious intuition or creative faculty; but this would contravene one of the broadest generalizations of modern psychology. Just as in the domain of matter nothing is created from nothing, just as in the domain of life there is no spontaneous generation, so in the domain of mind there are no ideas which do not owe their existence to antecedent ideas which stand in the relation of parent to child.

In Address (11 Dec 1895) as President of the Geological Society, 'The Origin of Hypotheses, illustrated by the Discussion of a Topographical Problem', printed as Presidential Address of Grove Karl Gilbert (1896), 4. Also collected in Science (1896), 3, 2.

There is no more wild, free, vigorous growth of the forest, but everything is in pots or rows like a rococo garden... The pupil is in the age of spontaneous variation which at no period of life is so great. He does not want a standardized, overpeptonized mental diet. It palls on his appetite.

This spontaneous emergence of order at critical points of instability, which is often referred to simply as emergence, is one of the hallmarks of life. It has been recognized as the dynamic origin of development, learning, and evolution. In other words, creativitythe generation of new formsis a key property of all living systems.

From 'Complexity and Life', in Fritjof Capra, Alicia Juarrero, Pedro Sotolongo (eds.) Reframing Complexity: Perspectives From the North and South (2007), 16.

Thus the radio elements formed strange and cruel families in which each member was created by spontaneous transformation of the mother substance: radium was a “descendant” of uranium, polonium a descendant of radium.

We are apt to consider that invention is the result of spontaneous action of some heavenborn genius, whose advent we must patiently wait for, but cannot artificially produce. It is unquestionable, however, that education, legal enactments, and general social conditions have a stupendous influence on the development of the originative faculty present in a nation and determine whether it shall be a fountain of new ideas or become simply a purchaser from others of ready-made inventions.

Epigraph, without citation, in Roger Cullisin, Patents, Inventions and the Dynamics of Innovation: A Multidisciplinary Study (2007), ix.

[In] the evolution of ideas New ideas are thrown up spontaneously like mutations; the vast majority of them are useless crank theories, the equivalent of biological freaks without survival-value.

Auto erotism,  spontaneous solitary sexual phenomena of which genital excitement during sleep may be said to be the type.