Fiction is, indeed, an indispensable supplement to logic, or even a part of it; whether we are working inductively or deductively, both ways hang closely together with fiction: and axioms, though they seek to be primary verities, are more akin to fiction. If we had realized the nature of axioms, the doctrine of Einstein, which sweeps away axioms so familiar to us that they seem obvious truths, and substitutes others which seem absurd because they are unfamiliar, might not have been so bewildering.

I have said that science is impossible without faith.  Inductive logic, the logic of Bacon, is rather something on which we can act than something which we can prove, and to act on it is a supreme assertion of faith  Science is a way of life which can only fluorish when men are free to have faith.

In the application of inductive logic to a given knowledge situation, the total evidence available must be used as a basis for determining the degree of confirmation. 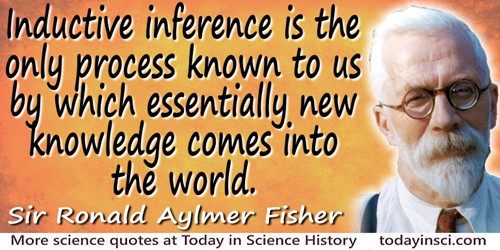 Inductive inference is the only process known to us by which essentially new knowledge comes into the world.

Inductive reasoning is, of course, good guessing, not sound reasoning, but the finest results in science have been obtained in this way. Calling the guess a working hypothesis, its consequences are tested by experiment in every conceivable way.

In Higher Mathematics for Students of Chemistry and Physics (1902), 2.

It would appear that Deductive and Demonstrative Sciences are all, without exception, Inductive Sciences: that their evidence is that of experience, but that they are also, in virtue of the peculiar character of one indispensable portion of the general formulae according to which their inductions are made, Hypothetical Sciences. Their conclusions are true only upon certain suppositions, which are, or ought to be, approximations to the truth, but are seldom, if ever, exactly true; and to this hypothetical character is to be ascribed the peculiar certainty, which is supposed to be inherent in demonstration.

Newtons theory is the circle of generalization which includes all the others [as Keplers laws, Ptolemys theory, etc.];the highest point of the inductive ascent;the catastrophe of the philosophic drama to which Plato had prologized; the point to which mens minds had been journeying for two thousand years.

The ideal of mathematics should be to erect a calculus to facilitate reasoning in connection with every province of thought, or of external experience, in which the succession of thoughts, or of events can be definitely ascertained and precisely stated. So that all serious thought which is not philosophy, or inductive reasoning, or imaginative literature, shall be mathematics developed by means of a calculus.

The increasing technicality of the terminology employed is also a serious difficulty. It has become necessary to learn an extensive vocabulary before a book in even a limited department of science can be consulted with much profit. This change, of course, has its advantages for the initiated, in securing precision and concisement of statement; but it tends to narrow the field in which an investigator can labour, and it cannot fail to become, in the future, a serious impediment to wide inductive generalisations.

The Law of Causation, the recognition of which is the main pillar of inductive science, is but the familiar truth that invariability of succession is found by observation to obtain between every fact in nature and some other fact which has preceded it.

In 'On the Law of Universal Causation', A System of Logic, Ratiocinative and Inductive: Being a Connected View of the Principles of Evidence and the Methods of Scientific Investigation, (1846), 197.

The science of optics, like every other physical science, has two different directions of progress, which have been called the ascending and the descending scale, the inductive and the deductive method, the way of analysis and of synthesis. In every physical science, we must ascend from facts to laws, by the way of induction and analysis; and we must descend from laws to consequences, by the deductive and synthetic way. We must gather and group appearances, until the scientific imagination discerns their hidden law, and unity arises from variety; and then from unity must reduce variety, and force the discovered law to utter its revelations of the future.

In On a General Method of Expressing the Paths of Light, & of the Planets, by the Coefficients of a Characteristic Function (1833), 7-8. [The spelling as groupe in the original text, has her been corrected to group to avoid an intrusive sic.]

The validity of all the Inductive Methods depends on the assumption that every event, or the beginning of every phenomenon, must have some cause; some antecedent, upon the existence of which it is invariably and unconditionally consequent.

There is no inductive method which could lead to the fundamental concepts of physics. Failure to understand this fact constituted the basic philosophical error of so many investigators of the nineteenth century.

There may be instances of mere accidental discovery; but, setting these aside, the great advances made in the inductive sciences are, for the most part, preceded by a more or less probable hypothesis. The imagination, having some small light to guide it, goes first. Further observation, experiment, and reason follow.

We come finally, however, to the relation of the ideal theory to real world, or real probability. If he is consistent a man of the mathematical school washes his hands of applications. To someone who wants them he would say that the ideal system runs parallel to the usual theory: If this is what you want, try it: it is not my business to justify application of the system; that can only be done by philosophizing; I am a mathematician. In practice he is apt to say: try this; if it works that will justify it. But now he is not merely philosophizing; he is committing the characteristic fallacy. Inductive experience that the system works is not evidence.

We know that the probability of well-established induction is great, but, when we are asked to name its degree we cannot. Common sense tells us that some inductive arguments are stronger than others, and that some are very strong. But how much stronger or how strong we cannot express.

We now realize with special clarity, how much in error are those theorists who believe that theory comes inductively from experience.