There is no such thing as a Scientific Mind. Scientists are people of very dissimilar temperaments doing different things in very different ways. Among scientists are collectors, classifiers, and compulsive tidiers-up; many are detectives by temperament and many are explorers; some are artists and others artisans. There are poet-scientists and philosopher-scientists and even a few mystics.

Before any great scientific principle receives distinct enunciation by individuals, it dwells more or less clearly in the general scientific mind. The intellectual plateau is already high, and our discoverers are those who, like peaks above the plateau, rise a little above the general level of thought at the time.

Humor can be dissected, as a frog can, but the thing dies in the process and the innards are discouraging to any but the purely scientific mind.

In Elwyn Brooks White, Katharine Sergeant Angell White, first paragraph, 'The Preaching Humorist', The Saturday Review (18 Oct 1941), 16. Also collected in the same authors book, A Subtreasury of American Humor (1941), xvii. Seen in later books, in a number of variants, for example, Analyzing humor is like dissecting a frog. Few people are interested and the frog dies of it, in Bob Phillips, Phillips Treasury of Humorous Quotations (2004), 130.

In a famous passage, René Descartes tells us that he considered himself to be placed in three simultaneous domiciles, patiently recognizing his loyalties to the social past, fervidly believing in a final solution of natures secrets and in the meantime consecrated to the pursuit of scientific doubt. Here we have the half way house of the scientific laboratory, of the scientific mind in the midst of its campaign.

It is the peculiar beauty of this method, gentlemen, and one which endears it to the really scientific mind, that under no circumstance can it be of the smallest possible utility.

Quoted as It is reported that once in a lecture after explaining a new solution of an old problem he said, in Alexander Macfarlane, 'Henry John Stephen Smith', Lectures on Ten British Mathematicians of the Nineteenth Century (1916), 100.

The best class of scientific mind is the same as the best class of business mind. The great desideratum in either case is to know how much evidence is enough to warrant action. It is as unbusiness-like to want too much evidence before buying or selling as to be content with too little. The same kind of qualities are wanted in either case. The difference is that if the business man makes a mistake, he commonly has to suffer for it, whereas it is rarely that scientific blundering, so long as it is confined to theory, entails loss on the blunderer. On the contrary it very often brings him fame, money and a pension. Hence the business man, if he is a good one, will take greater care not to overdo or underdo things than the scientific man can reasonably be expected to take. 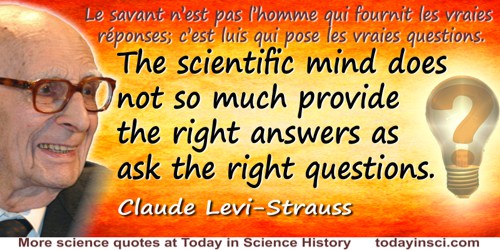 The scientific mind does not so much provide the right answers as ask the right questions.

In 'The Highest Aim of the Physicist: Presidential Address Delivered at the 2nd Meeting of the Society, October 28th, 1899', Bulletin of the American Physical Society (1899), 1, 13.

This leads us to ask for the reasons which call for this new theory of transmutation. The beginning of things must needs lie in obscurity, beyond the bounds of proof, though within those of conjecture or of analogical inference. Why not hold fast to the customary view, that all species were directly, instead of indirectly, created after their respective kinds, as we now behold them,--and that in a manner which, passing our comprehension, we intuitively refer to the supernatural? Why this continual striving after the unattained and dim,these anxious endeavors, especially of late years, by naturalists and philosophers of various schools and different tendencies, to penetrate what one of them calls the mystery of mysteries, the origin of species? To this, in general, sufficient answer may be found in the activity of the human intellect, the delirious yet divine desire to know, stimulated as it has been by its own success in unveiling the laws and processes of inorganic Nature,in the fact that the principal triumphs of our age in physical science have consisted in tracing connections where none were known before, in reducing heterogeneous phenomena to a common cause or origin, in a manner quite analogous to that of the reduction of supposed independently originated species to a common ultimate origin,thus, and in various other ways, largely and legitimately extending the domain of secondary causes. Surely the scientific mind of an age which contemplates the solar system as evolved from a common, revolving, fluid mass, which, through experimental research, has come to regard light, heat, electricity, magnetism, chemical affinity, and mechanical power as varieties or derivative and convertible forms of one force, instead of independent species,which has brought the so-called elementary kinds of matter, such as the metals, into kindred groups, and raised the question, whether the members of each group may not be mere varieties of one species,and which speculates steadily in the direction of the ultimate unity of matter, of a sort of prototype or simple element which may be to the ordinary species of matter what the protozoa or component cells of an organism are to the higher sorts of animals and plants,the mind of such an age cannot be expected to let the old belief about species pass unquestioned.

'Darwin on the Origin of Species', The Atlantic Monthly (Jul 1860), 112-3. Also in 'Natural Selection Not Inconsistent With Natural Theology', Darwiniana: Essays and Reviews Pertaining to Darwinism (1876), 94-95.

We hold these truths to be self-evident.
Franklin's edit to the assertion of religion in Thomas Jefferson's original wording, We hold these truths to be sacred and undeniable in a draft of the Declaration of Independence changes it instead into an assertion of rationality. The scientific mind of Franklin drew on the scientific determinism of Isaac Newton and the analytic empiricism of David Hume and Gottfried Leibniz. In what became known as Hume's Fork the latters' theory distinguished between synthetic truths that describe matters of fact, and analytic truths that are self-evident by virtue of reason and definition.

As explained by Walter Isaacson in Benjamin Franklin: An American Life (2004), 312.

[No one will be able to] deter the scientific mind from probing into the unknown any more than Canute could command the tides.
Comment upon the U.S. Supreme Court's 1980 decision permitting the patenting of life forms.