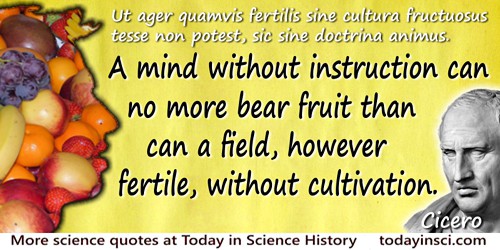 As the prerogative of Natural Science is to cultivate a taste for observation, so that of Mathematics is, almost from the starting point, to stimulate the faculty of invention.

But it is precisely mathematics, and the pure science generally, from which the general educated public and independent students have been debarred, and into which they have only rarely attained more than a very meagre insight. The reason of this is twofold. In the first place, the ascendant and consecutive character of mathematical knowledge renders its results absolutely insusceptible of presentation to persons who are unacquainted with what has gone before, and so necessitates on the part of its devotees a thorough and patient exploration of the field from the very beginning, as distinguished from those sciences which may, so to speak, be begun at the end, and which are consequently cultivated with the greatest zeal. The second reason is that, partly through the exigencies of academic instruction, but mainly through the martinet traditions of antiquity and the influence of mediaeval logic-mongers, the great bulk of the elementary text-books of mathematics have unconsciously assumed a very repellant form,something similar to what is termed in the theory of protective mimicry in biology the terrifying form. And it is mainly to this formidableness and touch-me-not character of exterior, concealing withal a harmless body, that the undue neglect of typical mathematical studies is to be attributed.

Forty years ago the philosopher Alfred North Whitehead thought it self-evident that you would get a good government if you took power out of the hands of the acquisitive and gave it to the learned and the cultivated. At present, a child in kindergarten knows better than that.

God is a child; and when he began to play, he cultivated mathematics. It is the most godly of mans games.

He who appropriates land to himself by his labor, does not lessen but increases the common stock of mankind. For the provisions serving to the support of human life, produced by one acre of inclosed and cultivated land, are  ten times more than those which are yielded by an acre of land, of an equal richness lying waste in common. And therefore he that incloses land and has a greater plenty of the conveniences of life from ten acres than he could have from a hundred left to nature, may truly be said to give ninety acres to mankind.

How indispensable to a correct study of Nature is a perception of her true meaning. The fact will one day flower out into a truth. The season will mature and fructify what the understanding had cultivated. Mere accumulators of factscollectors of materials for the master-workmenare like those plants growing in dark forests, which put forth only leaves instead of blossoms.

In addition to this it [mathematics] provides its disciples with pleasures similar to painting and music. They admire the delicate harmony of the numbers and the forms; they marvel when a new discovery opens up to them an unexpected vista; and does the joy that they feel not have an aesthetic character even if the senses are not involved at all?  For this reason I do not hesitate to say that mathematics deserves to be cultivated for its own sake, and I mean the theories which cannot be applied to physics just as much as the others.

In the secondary schools mathematics should be a part of general culture and not contributory to technical training of any kind; it should cultivate space intuition, logical thinking, the power to rephrase in clear language thoughts recognized as correct, and ethical and esthetic effects; so treated, mathematics is a quite indispensable factor of general education in so far as the latter shows its traces in the comprehension of the development of civilization and the ability to participate in the further tasks of civilization.

— German Society for the Advancement of Instruction in Mathematics

The purposes of instruction in mathematics in secondary schools formulated by the German Society for the Advancement of Instruction. From Unterrichtsblätter fur Mathematik und Naturwissenschaft (1904), 128. As translated in Robert Édouard Moritz, Memorabilia Mathematica; Or, The Philomaths Quotation-Book (1914), 72-73.

Mathematics appreciation is more than a course. It is an attitude that we should cultivate in every mathematics course.

In 'Loving Math Infinitely', The Chronicle of Higher Education (19 Jan 2001).

Medicine is essentially a learned profession. Its literature is ancient, and connects it with the most learned periods of antiquity; and its terminology continues to be Greek or Latin. You cannot name a part of the body, and scarcely a disease, without the use of a classical term. Every structure bears upon it the impress of learning, and is a silent appeal to the student to cultivate an acquaintance with the sources from which the nomenclature of his profession is derived.

From Address (Oct 1874) delivered at Guys Hospital, 'On The Study of Medicine', printed in British Medical journal (1874), 2, 425. Collected in Sir William Withey Gull and Theodore Dyke Acland (ed.), A Collection of the Published Writings of William Withey Gull (1896), 11.

Progress cannot long be made in the application of the sciences without cultivating the theory of them.

Science is not about control. It is about cultivating a perpetual sense of wonder in the face of something that forever grows one step richer and subtler than our latest theory about it. It is about reverence, not mastery.

The more we study Art, the less we care for Nature. What Art really reveals to us is Natures lack of design, her curious crudities, her extraordinary monotony, her absolutely unfinished condition.  It is fortunate for us, however, that Nature is so imperfect, as otherwise we should have had no art at all. Art is our spirited protest, our gallant attempt to teach Nature her proper place. As for the infinite variety of Nature, that is a pure myth. It is not to be found in Nature herself. It resides in the imagination, or fancy, or cultivated blindness of the man who looks at her.

In 'Decay of Lying', The Writings of Oscar Wilde: Epigrams, Phrases and Philosophies For the Use of the Young (1907), 5.

There is probably no other science which presents such different appearances to one who cultivates it and to one who does not, as mathematics. To this person it is ancient, venerable, and complete; a body of dry, irrefutable, unambiguous reasoning. To the mathematician, on the other hand, his science is yet in the purple bloom of vigorous youth, everywhere stretching out after the attainable but unattained and full of the excitement of nascent thoughts; its logic is beset with ambiguities, and its analytic processes, like Bunyans road, have a quagmire on one side and a deep ditch on the other and branch off into innumerable by-paths that end in a wilderness.

This is an age of science. ... All important fields of activity from the breeding of bees to the administration of an empire, call for an understanding of the spirit and the technique of modern science. The nations that do not cultivate the sciences cannot hold their own.

We pass with admiration along the great series of mathematicians, by whom the science of theoretical mechanics has been cultivated, from the time of Newton to our own. There is no group of men of science whose fame is higher or brighter. The great discoveries of Copernicus, Galileo, Newton, had fixed all eyes on those portions of human knowledge on which their successors employed their labors. The certainty belonging to this line of speculation seemed to elevate mathematicians above the students of other subjects; and the beauty of mathematical relations and the subtlety of intellect which may be shown in dealing with them, were fitted to win unbounded applause. The successors of Newton and the Bernoullis, as Euler, Clairaut, DAlembert, Lagrange, Laplace, not to introduce living names, have been some of the most remarkable men of talent which the world has seen.