A game is on, at the other end of this infinite distance, and heads or tails will turn up. What will you wager? According to reason you cannot leave either; according to reason you cannot leave either undone... Yes, but wager you must; there is no option, you have embarked on it. So which will you have. Come. Since you must choose, let us see what concerns you least. You have two things to lose: truth and good, and two things to stake: your reason and your will, your knowledge and your happiness. And your nature has two things to shun: error and misery. Your reason does not suffer by your choosing one more than the other, for you must choose. That is one point cleared. But your happiness? Let us weigh gain and loss in calling heads that God is. Reckon these two chances: if you win, you win all; if you lose, you lose naught. Then do not hesitate, wager that He is. 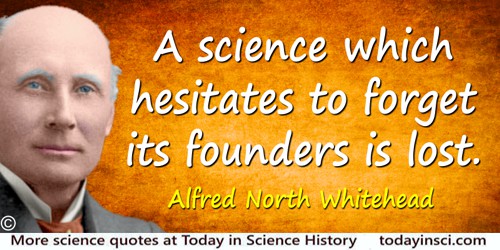 A science which hesitates to forget its founders is lost.

All our knowledge merely helps us to die a more painful death than the animals that know nothing. A day will come when science will turn upon its error and no longer hesitate to shorten our woes. A day will come when it will dare and act with certainty; when life, grown wiser, will depart silently at its hour, knowing that it has reached its term.

But nature is remarkably obstinate against purely logical operations; she likes not schoolmasters nor scholastic procedures. As though she took a particular satisfaction in mocking at our intelligence, she very often shows us the phantom of an apparently general law, represented by scattered fragments, which are entirely inconsistent. Logic asks for the union of these fragments; the resolute dogmatist, therefore, does not hesitate to go straight on to supply, by logical conclusions, the fragments he wants, and to flatter himself that he has mastered nature by his victorious intelligence.

'On the Principles of Animal Morphology', Proceedings of the Royal Society of Edinburgh (2 Apr 1888), 15, 289. Original as Letter to Mr John Murray, communicated to the Society by Professor Sir William Turner. Page given as in collected volume published 1889.

Do the days work. If it be to protect the rights of the weak, whoever objects, do it. If it be to help a powerful corporation better to serve the people, whatever the opposition, do that. Expect to be called a stand-patter, but dont be a stand-patter. Expect to be called a demagogue, but dont be a demagogue. Dont hesitate to be as revolutionary as science. Dont hesitate to be as reactionary as the multiplication table. Dont expect to build up the weak by pulling down the strong. Dont hurry to legislate. Give administration a chance to catch up with legislation.

I am the most hesitating of men, the most fearful of committing myself when I lack evidence. But on the contrary, no consideration can keep me from defending what I hold as true when I can rely on solid scientific proof.

I heard there the nightingale in all its perfection: and I do not hesitate to pronounce that in America it would be deemed a bird of the third rank only, our mocking-bird and fox-coloured thrush being unquestionably superior to it.

If there is any kind of animal which is female and has no male separate from it, it is possible that this may generate a young one from itself. No instance of this worthy of any credit has been observed up to the present at any rate, but one case in the class of fishes makes us hesitate. No male of the so-called erythrinus has ever yet been seen, but females, and specimens full of roe, have been seen. Of this, however, we have as yet no proof worthy of credit.

In addition to this it [mathematics] provides its disciples with pleasures similar to painting and music. They admire the delicate harmony of the numbers and the forms; they marvel when a new discovery opens up to them an unexpected vista; and does the joy that they feel not have an aesthetic character even if the senses are not involved at all?  For this reason I do not hesitate to say that mathematics deserves to be cultivated for its own sake, and I mean the theories which cannot be applied to physics just as much as the others.

In the beginning of the year 1800 the illustrious professor [Volta] conceived the idea of forming a long column by piling up, in succession, a disc of copper, a disc of zinc, and a disc of wet cloth, with scrupulous attention to not changing this order. What could be expected beforehand from such a combination? Well, I do not hesitate to say, this apparently inert mass, this bizarre assembly, this pile of so many couples of unequal metals separated by a little liquid is, in the singularity of effect, the most marvellous instrument which men have yet invented, the telescope and the steam engine not excepted.

Let us weigh the gain and the loss in wagering that God is. Let us consider the two chances. If you gain, you gain all; if you lose, you lose nothing. Wager then without hesitation that He is.

Now of the difficulties bound up with the public in which we doctors work, I hesitate to speak in a mixed audience. Common sense in matters medical is rare, and is usually in inverse ratio to the degree of education.

'Teaching and Thinking' (1894). In Aequanimitas with Other Addresses to Medical Students, Nurses and Practitioners of Medicine (1904), 131.

The best that Gauss has given us was likewise an exclusive production. If he had not created his geometry of surfaces, which served Riemann as a basis, it is scarcely conceivable that anyone else would have discovered it. I do not hesitate to confess that to a certain extent a similar pleasure may be found by absorbing ourselves in questions of pure geometry.

The examining physician often hesitates to make the necessary examination because it involves soiling the finger.

The modern system of elevating every minor group, however trifling the characters by which it is distinguished, to the rank of genus, evinces, we think, a want of appreciation of the true value of classification. The genus is the group which, in consequence of our system of nomenclature, is kept most prominently before the mind, and which has therefore most importance attached to it ... The rashness of some botanists is productive of still more detrimental effects to the science in the case of species; for though a beginner may pause before venturing to institute a genus, it rarely enters into his head to hesitate before proposing a new species.

(With Thomas Thomson) Flora Indica: A Systematic Account of the Plants of British India (1855),10-11.

The state exists for man, not man for the state. The same may be said of science. These are old phrases, coined by people who saw in human individuality the highest human value. I would hesitate to repeat them, were it not for the ever recurring danger that they may be forgotten, especially in these days of organization and stereotypes.

The surgeon should not love difficult cases and should not allow himself to be tempted to undertake those that are desperate. He should help the poor as far as he can, but he should not hesitate to ask for good fees from the rich.

Theres something about a pious man such as he. He will cheerfully cut your throat if it suits him, but he will hesitate to endanger the welfare of your immaterial and problematical soul.

We need not hesitate to admit that the Sun is richly stored with inhabitants.

With full responsibility for my words as a professional biologist, I do not hesitate to say that all existing and genuine knowledge about the way in which the physical characteristics of human communities are related to their cultural capabilities can be written on the back of a postage stamp.