Accordingly the primordial state of things which I picture is an even distribution of protons and electrons, extremely diffuse and filling all (spherical) space, remaining nearly balanced for an exceedingly long time until its inherent instability prevails. We shall see later that the density of this distribution can be calculated; it was about one proton and electron per litre. There is no hurry for anything to begin to happen. But at last small irregular tendencies accumulate, and evolution gets under way. The first stage is the formation of condensations ultimately to become the galaxies; this, as we have seen, started off an expansion, which then automatically increased in speed until it is now manifested to us in the recession of the spiral nebulae.
As the matter drew closer together in the condensations, the various evolutionary processes followedâ€”evolution of stars, evolution of the more complex elements, evolution of planets and life.

Do the dayâ€™s work. If it be to protect the rights of the weak, whoever objects, do it. If it be to help a powerful corporation better to serve the people, whatever the opposition, do that. Expect to be called a stand-patter, but donâ€™t be a stand-patter. Expect to be called a demagogue, but donâ€™t be a demagogue. Donâ€™t hesitate to be as revolutionary as science. Donâ€™t hesitate to be as reactionary as the multiplication table. Donâ€™t expect to build up the weak by pulling down the strong. Donâ€™t hurry to legislate. Give administration a chance to catch up with legislation.

How can you shorten the subject? That stern struggle with the multiplication table, for many people not yet ended in victory, how can you make it less? Square root, as obdurate as a hardwood stump in a pasture nothing but years of effort can extract it. You canâ€™t hurry the process. Or pass from arithmetic to algebra; you canâ€™t shoulder your way past quadratic equations or ripple through the binomial theorem. Instead, the other way; your feet are impeded in the tangled growth, your pace slackens, you sink and fall somewhere near the binomial theorem with the calculus in sight on the horizon. So died, for each of us, still bravely fighting, our mathematical training; except for a set of people called â€śmathematiciansâ€ťâ€”born so, like crooks.

I remember working out a blueprint for my future when I was twelve years old I resolved first to make enough money so I'd never be stopped from finishing anything; second, that to accumulate money in a hurryâ€”and I was in a hurryâ€”I'd have to invent something that people wanted. And third, that if I ever was going to stand on my own feet, I'd have to leave home.

If catastrophic geology had at times pushed Nature to almost indecent extremes of haste, uniformitarian geology, on the other hand, had erred in the opposite direction, and pictured Nature when she was â€śyoung and wantoned in her primeâ€ť, as moving with the lame sedateness of advanced middle age. It became necessary, therefore, as Dr. Haughton expresses it, â€śto hurry up the phenomenaâ€ť.

It must happen that in some cases the author is not understood, or is very imperfectly understood; and the question is what is to be done. After giving a reasonable amount of attention to the passage, let the student pass on, reserving the obscurity for future efforts. â€¦ The natural tendency of solitary students, I believe, is not to hurry away prematurely from a hard passage, but to hang far too long over it; the just pride that does not like to acknowledge defeat, and the strong will that cannot endure to be thwarted, both urge to a continuance of effort even when success seems hopeless. It is only by experience we gain the conviction that when the mind is thoroughly fatigued it has neither the power to continue with advantage its course in .an assigned direction, nor elasticity to strike out a new path; but that, on the other hand, after being withdrawn for a time from the pursuit, it may return and gain the desired end.

Man occasionally stumbles on the truth, but then just picks himself up and hurries on regardless.

Nature does not hurry, yet everything is accomplished.

Only simpletons go to fortune-tellers. Who else would be in such a hurry to hear bad news.

Aphorism as given by the fictional character Dezhnev Senior, in Fantastic Voyage II: Destination Brain (1987), 165.

The old Sussex tortoise, that I have mentioned to you so often, is become my property. I dug it out of its winter dormitory in March last, when it was enough awakened to express its resentments by hissing; and, packing it in a box with earth, carried it eighty miles in post-chaises. The rattle and hurry of the journey so perfectly roused it that, when I turned it out on a border, it walked twice down to the bottom of my garden; however, in the evening, the weather being cold, it buried it-self in the loose mound, and continues still concealed â€¦ When one reflects on the state of this strange being, it is a matter of wonder to find that Providence should bestow such a profusion of days, such a seeming waste of longevity, on a reptile that appears to relish it so little as to squander more than two-thirds of its existence in joyless stupor, and be lost to all sensation for months together in the profoundest of slumbers. 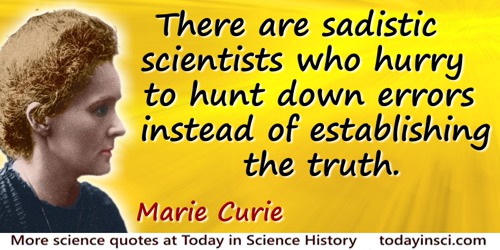 There are sadistic scientists who hurry to hunt down errors instead of establishing the truth.

Quotation translated by A.L. Mackay in Alan Lindsay Mackay and Maurice Ebison, The Harvest of a Quiet Eye (1977), 40. 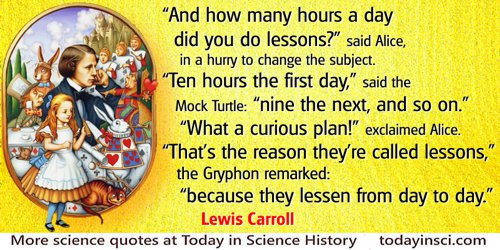