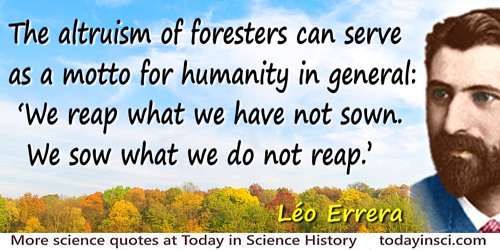 Altruisme des sylviculteurs pouvant servir de devise à l'humanité en général : «Nous récoltons ce que nous navons pas semé. Nous semons ce que nous ne récolterons pas.»
The altruism of foresters can serve as a motto for humanity in general: We reap what we have not sown. We sow what we do not reap. 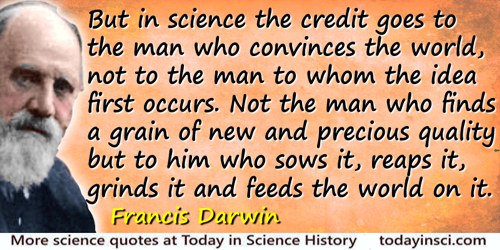 But in science the credit goes to the man who convinces the world, not to the man to whom the idea first occurs. Not the man who finds a grain of new and precious quality but to him who sows it, reaps it, grinds it and feeds the world on it.

Clearly, we have compiled a record of serious failures in recent technological encounters with the environment. In each case, the new technology was brought into use before the ultimate hazards were known. We have been quick to reap the benefits and slow to comprehend the costs.

Conservation is getting nowhere because it is incompatible with our Abrahamic concept of land. We abuse land because we regard it as a commodity belonging to us. When we see land as a community to which we belong, we may begin to use it with love and respect. There is no other way for land to survive the impact of mechanized man, nor for us to reap from it the esthetic harvest it is capable, under science, of contributing to culture.

Dont judge each day by the harvest you reap, but by the seeds you plant. 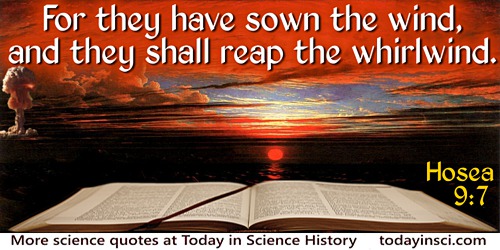 For they have sown the wind, and they shall reap the whirlwind.

If our intention had been merely to bring back a handful of soil and rocks from the lunar gravel pit and then forget the whole thing, we would certainly be history's biggest fools. But that is not our intention nowit never will be. What we are seeking in tomorrow's [Apollo 11] trip is indeed that key to our future on earth. We are expanding the mind of man. We are extending this God-given brain and these God-given hands to their outermost limits and in so doing all mankind will benefit. All mankind will reap the harvest. What we will have attained when Neil Armstrong steps down upon the moon is a completely new step in the evolution of man.

If you are young, then I say: Learn something about statistics as soon as you can. Dont dismiss it through ignorance or because it calls for thought.  If you are older and already crowned with the laurels of success, see to it that those under your wing who look to you for advice are encouraged to look into this subject. In this way you will show that your arteries are not yet hardened, and you will be able to reap the benefits without doing overmuch work yourself. Whoever you are, if your work calls for the interpretation of data, you may be able to do without statistics, but you wont do as well.

In Cairo, I secured a few grains of wheat that had slumbered for more than thirty centuries in an Egyptian tomb. As I looked at them this thought came into my mind: If one of those grains had been planted on the banks of the Nile the year after it grew, and all its lineal descendants had been planted and replanted from that time until now, its progeny would to-day be sufficiently numerous to feed the teeming millions of the world. An unbroken chain of life connects the earliest grains of wheat with the grains that we sow and reap. There is in the grain of wheat an invisible something which has power to discard the body that we see, and from earth and air fashion a new body so much like the old one that we cannot tell the one from the other.This invisible germ of life can thus pass through three thousand resurrections.

Natural history is a matter of observation; it is a harvest which you gather when and where you find it growing. Birds and squirrels and flowers are not always in season, but philosophy we have always with us. It is a crop which we can grow and reap at all times and in all places and it has its own value and brings its own satisfaction.

Scientists have reaped rich rewards, they have sat high in government councils and have been blinded by the attractiveness of public life—all this because they happen to have been good killers.

There are two kinds of physician - those who work for love, and those who work for their own profit. They are both known by their works; the true and just physician is known by his love and by his unfailing love for his neighbor. The unjust physicians are known for their transgressions against the commandment; for they reap, although they have not sown, and they are like ravening wolves; they reap because they want to reap, in order to increase their profit, and they are heedless of the commandment of love.

We may regard [Scheele] not only as having given the first indication of the rich harvest to be reaped by the investigation of the compounds of organic chemistry, but as having been the first to discover and make use of characteristic reactions by which closely allied substances can be detected and separated, so that he must be considered one of the chief founders of analytical chemistry.

We of an older generation can get along with what we have, though with growing hardship; but in your full manhood and womanhood you will want what nature once so bountifully supplied and man so thoughtlessly destroyed; and because of that want you will reproach us, not for what we have used, but for what we have wasted...So any nation which in its youth lives only for the day, reaps without sowing, and consumes without husbanding, must expect the penalty of the prodigal whose labor could with difficulty find him the bare means of life.

When the interval between the intellectual classes and the practical classes is too great, the former will possess no influence, the latter will reap no benefit.

[I have seen] workers in whom certain morbid affections gradually arise from some particular posture of the limbs or unnatural movements of the body called for while they work. Such are the workers who all day stand or sit, stoop or are bent double, who run or ride or exercise their bodies in all sorts of [excess] ways. ... the harvest of diseases reaped by certain workers ... [from] irregular motions in unnatural postures of the body.

translation published by the University of Chicago Press, 1940