As for your doctrines I am prepared to go to the Stake if requisite ... I trust you will not allow yourself to be in any way disgusted or annoyed by the considerable abuse & misrepresentation which unless I greatly mistake is in store for you... And as to the curs which will bark and yelp - you must recollect that some of your friends at any rate are endowed with an amount of combativeness which (though you have often & justly rebuked it) may stand you in good stead - I am sharpening up my claws and beak in readiness.

But science and technology are only one of the avenues toward reality; others are equally needed to comprehend the full significance of our existence. Indeed, these other avenues are necessary for the prevention of thoughtless and inhuman abuses of the results of science.

Conservation is getting nowhere because it is incompatible with our Abrahamic concept of land. We abuse land because we regard it as a commodity belonging to us. When we see land as a community to which we belong, we may begin to use it with love and respect. There is no other way for land to survive the impact of mechanized man, nor for us to reap from it the esthetic harvest it is capable, under science, of contributing to culture.

I am absolutely convinced that no wealth in the world can help humanity forward, even in the hands of the most devoted worker. The example of great and pure individuals is the only thing that can lead us to noble thoughts and deeds. Money only appeals to selfishness and irresistibly invites abuse. Can anyone imagine Moses, Jesus or Gandhi armed with the moneybags of Carnegie?

I hold every man a debtor to his profession; from the which as men of course do seek to receive countenance and profit, so ought they of duty to endeavour themselves, by way of amends, to be a help and ornament thereunto. This is performed, in some degree, by the honest and liberal practice of a profession; where men shall carry a respect not to descend into any course that is corrupt and unworthy thereof, and preserve themselves free from the abuses wherewith the same profession is noted to be infected: but much more is this performed, if a man be able to visit and strengthen the roots and foundation of the science itself; thereby not only gracing it in reputation and dignity, but also amplifying it in profession and substance.

If you could see what I almost daily see in my practice  persons  in the very last stages of wretched existence, emaciated to a skeleton, with both tables of the skull almost completely perforated in many places, half the nose gone, with rotten jaws, ulerated throats, breaths most pestiferous more intolerable than poisonous upas, limbs racked with the pains of the Inquisition, minds as imbecile as the puling babe, a grievous burden to themselves and a disgusting spectacle to others, you would exclaim as I have often done, 'O! the lamentable want of science that dictates the abuse (use) of that noxious drug calomel!'
[Calomel is the mercury compound, Hg2Cl2.]

In a world that is rightly so concerned about climate change and the atmosphere, to be so ignorant and neglectful of our oceans is deeply troubling. However,  having woken up to this living disaster and having realized that there are limits to how much abuse we can inflict, its not too late to turn things around.

It has been said that he who was the first to abuse his fellow-man instead of knocking out his brains without a word, laid thereby the basis of civilisation.

Know then thyself, presume not God to scan;
The proper study of Mankind is Man.
Plac'd on this isthmus of a middle state,
A being darkly wise, and rudely great:
With too much knowledge for the Sceptic side,
With too much weakness for the Stoic's pride,
He hangs between; in doubt to act, or rest;
In doubt to deem himself a God, or Beast;
In doubt his Mind or Body to prefer,
Born but to die, and reas'ning but to err;
Alike in ignorance, his reason such,
Whether he thinks too little, or too much:
Chaos of Thought and Passion, all confus'd;
Still by himself abus'd, or disabus'd;
Created half to rise, and half to fall;
Great lord of all things, yet a prey to all;
Sole judge of Truth, in endless Error hurl'd:
The glory, jest, and riddle of the world!
... Superior beings, when of late they saw
A mortal Man unfold all Nature's law,
Admir'd such wisdom in an earthly shape,
And shew'd a NEWTON as we shew an Ape. 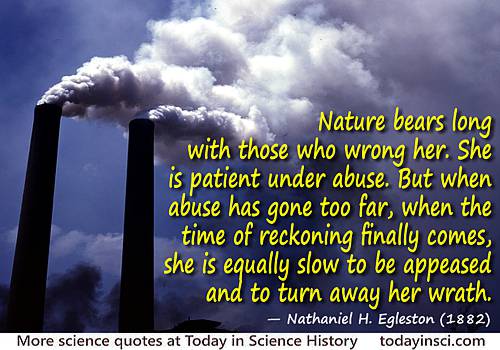 Nature bears long with those who wrong her. She is patient under abuse. But when abuse has gone too far, when the time of reckoning finally comes, she is equally slow to be appeased and to turn away her wrath. 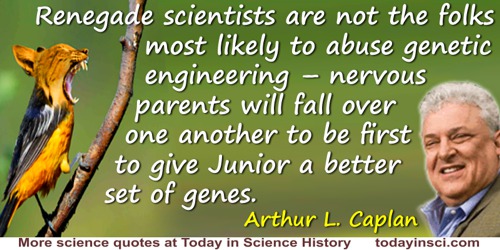 Renegade scientists and totalitarian loonies are not the folks most likely to abuse genetic engineering. You and I are--not because we are bad but because we want to do good. In a world dominated by competition, parents understandably want to give their kids every advantage. ... The most likely way for eugenics to enter into our lives is through the front door as nervous parents ... will fall over one another to be first to give Junior a better set of genes.

We are not here to abuse and exploit other creatures. We are here to live and help live. Every meal is part of the journey. 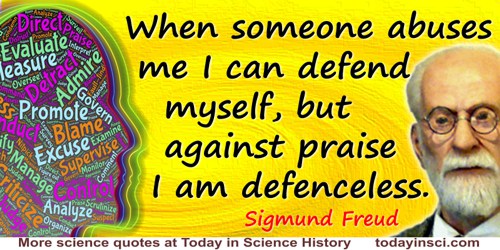 When someone abuses me I can defend myself, but against praise I am defenceless.

Who would be a better source of information about the forests than aborigines themselves because they have lived off the forest for most of their lives. The forests have provided the aborigines with food, medicine and shelter among other things and yet, the aborigines have never abused or ravaged the forest the way others have.

Why, in God's name, in our days, is there such a great difference between a physician and a surgeon? The physicians have abandoned operative procedures and the laity, either, as some say, because they disdain to operate with their hands, or rather, as I think, because they do not know how to perform operation. Indeed, this abuse is so inveterate that the common people look upon it as impossible for the same person to understand both surgery and medicine.

[Mercurial medicines] affect the human constitution in a peculiar manner, taking, so to speak, an iron grasp of all its systems, and penetrating even to the bones, by which they not only change the healthy action of its vessels, and general structure, but greatly impair and destroy its energies; so that their abuse is rarely overcome. When the tone of the stomach, intestines, or nervous system generally, has been once injured by this mineral ... it could seldom be restored.