An infinity of these tiny animals defoliate our plants, our trees, our fruits... they attack our houses, our fabrics, our furniture, our clothing, our furs ... He who in studying all the different species of insects that are injurious to us, would seek means of preventing them from harming us, would seek to cause them to perish, proposes for his goal important tasks indeed.

False facts are highly injurious to the progress of science, for they often long endure; but false views, if supported by some evidence, do little harm, as every one takes a salutary pleasure in proving their falseness; and when this is done, one path towards error is closed and the road to truth is often at the same time opened.

Geometrical reasoning, and arithmetical process, have each its own office: to mix the two in elementary instruction, is injurious to the proper acquisition of both.

It is usually not recognized that for every injurious or parasitic microbe there are dozens of beneficial ones. Without the latter, there would be no bread to eat nor wine to drink, no fertile soils and no potable waters, no clothing and no sanitation. One can visualize no form of higher life without the existence of the microbes. They are the universal scavengers. They keep in constant circulation the chemical elements which are so essential to the continuation of plant and animal life.

Just as eating contrary to the inclination is injurious to the health, so study without desire sports the memory, and it retains nothing that it takes in.

Some persons have contended that mathematics ought to be taught by making the illustrations obvious to the senses. Nothing can be more absurd or injurious: it ought to be our never-ceasing effort to make people think, not feel.

The great end of life is not knowledge, but action. What men need is as much knowledge as they can organize for action; give them more and it may become injurious. Some men are heavy and stupid from undigested learning.

The injurious agent in cigarettes comes principally from the burning paper wrapper. The substance thereby formed is called “acrolein.” It has a violent action on the nerve centers, producing degeneration of the cells of the brain, which is quite rapid among boys. Unlike most narcotics, this degeneration is permanent and uncontrollable. I employ no person who smokes cigarettes.
[From the Laboratory of Thomas A. Edison, Orange, N.J., April 26, 1914.]

The stimulus of competition, when applied at an early age to real thought processes, is injurious both to nerve-power and to scientific insight.

This preservation of favourable variations and the destruction of injurious variations, I call Natural Selection, or the Survival of the Fittest. Variations neither useful nor injurious would not be affected by natural selection and would be left a fluctuating element. 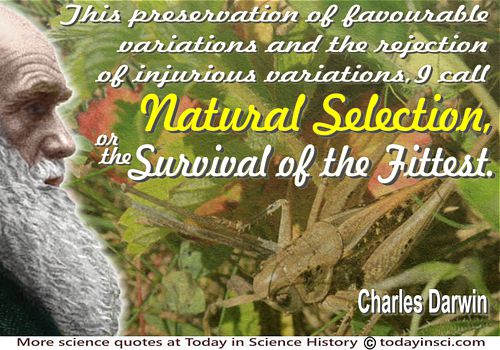 A grasshopper camouflaged in the grass. (source)

This preservation of favourable variations and the rejection of injurious variations, I call Natural Selection. Variations neither useful nor injurious would not be affected by natural selection and would be left a fluctuating element.

From Origin of Species (first edition, 1859), 81. The phrase survival of the fittest was not added until the fifth edition (1869), when also rejection was replaced with destruction.

Traditions may be very important, but they can be extremely hampering as well, and whether or not tradition is of really much value I have never been certain. Of course when they are very fine, they do good, but it is very difficult of course ever to repeat the conditions under which good traditions are formed, so they may be and are often injurious and I think the greatest progress is made outside of traditions.

Quoted as the notations of an unnamed student in the auditorium when Councilman made impromptu biographical remarks at his last lecture as a teacher of undergraduates in medicine (19 Dec 1921). As quoted in obituary, 'William Thomas Councilman', by Harvey Cushing, Science (30 Jun 1933), 77, No. 2009, 613-618. Reprinted in National Academy Biographical Memoirs, Vol. 18, 159-160. The transcribed lecture was published privately in a 23-page booklet, A Lecture Delivered to the Second-Year Class of the Harvard Medical School at the Conclusion of the Course in Pathology, Dec. 19, 1921.

When the principles of breeding and of inheritance are better understood, we shall not hear ignorant members of our legislature rejecting with scorn a plan for ascertaining by an easy method whether or not consanguineous marriages are injurious to man.