[On President Bush's plan to get to Mars in 10 years] Stupid. Robots would do a better job and be much cheaper because you don't have to bring them back.

A child of the new generation
Refused to learn multiplication.
He said Dont conclude
That Im stupid or rude;
I am simply without motivation. 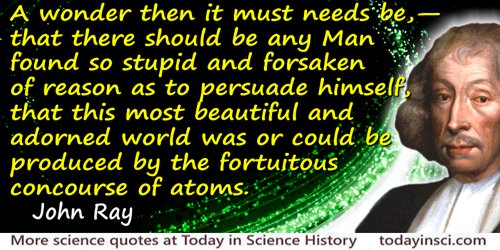 A wonder then it must needs be,that there should be any Man found so stupid and forsaken of reason as to persuade himself, that this most beautiful and adorned world was or could be produced by the fortuitous concourse of atoms.

Are you aware that humanity is just a blip? Not even a blip. Just a fraction of a fraction of what the universe has been and will become? Talk about perspective. I figure I cant feel so entirely stupid about saying what I said because, first of all, its true. And second of all, there will be no remnant of me or my stupidity. No fossil or geographical shift that can document, really, even the most important historical human beings, let alone my paltry admissions.

As soon as he ceased to be mad he became merely stupid. There are maladies we must not seek to cure because they alone protect us from others that are more serious.

Very often seen (?mis-)attributed to Albert Einstein, but there seems to be no authenticating primary source. (Webmaster has tried, but not yet found one.) Probably best regarded as Anonymous.

Every little girl needed a doll through which to project herself into her dream of her future. If she was going to do role playing of what she would be like when she was 16 or 17, it was a little stupid to play with a doll that had a flat chest. So I gave it beautiful breasts. 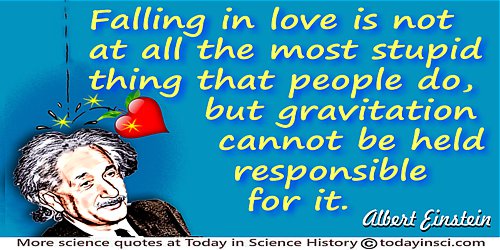 Falling in love is not at all the most stupid thing that people do, but gravitation cannot be held responsible for it.
Scribbled by Einstein on a letter received during a visit to England (1933) from a man who suggested that gravity meant that as the world rotated people were sometimes upside down, horizontal, or at 'left angles' and that perhaps, this disorientation explained why people do foolish things like falling in love.

I think modern science should graft functional wings on a pig, simply so no one can ever use that stupid saying again.

If Louis Pasteur were to come out of his grave because he heard that the cure for cancer still had not been found, NIH would tell him, Of course we'll give you assistance. Now write up exactly what you will be doing during the three years of your grant. Pasteur would say, Thank you very much, and would go back to his grave. Why? Because research means going into the unknown. If you know what you are going to do in science, then you are stupid! This is like telling Michelangelo or Renoir that he must tell you in advance how many reds and how many blues he will buy, and exactly how he will put those colors together.

If one were to bring ten of the wisest men in the world together and ask them what was the most stupid thing in existence, they would not be able to discover anything so stupid as astrology. 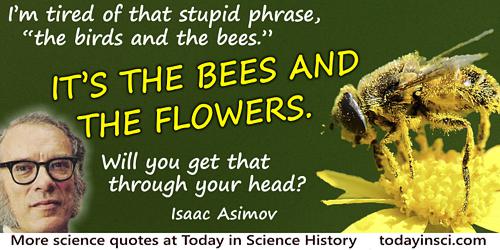 Im tired of that stupid phrase, the birds and the bees which is supposed to represent the facts of life or the beginnings of the sex instruction of the young.  Well for heavens sake, has anyone ever tried to explain sex by talking about the birds and the bees? What have the birds and the bees to do with it? ITS THE BEES AND THE FLOWERS. Will you get that through your head? ITS THE BEES AND THE FLOWERS. The bee travels to one flower and picks up pollen from the stamens. The pollen contains the male sex cells of the plant. The bee then travels to another flower (of the same species) and the pollen brushes off onto the pistil, which contains the female sex cells of the plant.  Now in the human being  we dont rely on bees to do it for us.

Money is a stupid measure of achievement, but unfortunately it is the only universal measure we have.

Seen quoted, without citation, since as early as The Forbes Scrapbook of Thoughts on the Business of Life (1950), 486. If you know a primary source, please contact Webmaster.

Motion with respect to the universal ocean of aether eludes us. We say, Let V be the velocity of a body through the aether, and form the various electromagnetic equations in which V is scattered liberally. Then we insert the observed values, and try to eliminate everything which is unknown except V. The solution goes on famously; but just as we have got rid of all the other unknowns, behold! V disappears as well, and we are left with the indisputable but irritating conclusion 
0 = 0
This is a favourite device that mathematical equations resort to, when we propound stupid questions.

My definition of an educated man is the fellow who knows the right thing to do at the time it has to be done. You can be sincere and still be stupid.

My reflection, when I first made myself master of the central idea of the Origin, was, How extremely stupid not to have thought of that!

One could not be a successful scientist without realizing that, in contrast to the popular conception supported by newspapers and mothers of scientists, a goodly number of scientists are not only narrow-minded and dull, but also just stupid.

Only to often on meeting scientific men, even those of genuine distiction, one finds that they are dull fellows and very stupid. They know one thing to excess; they know nothing else. Pursuing facts too doggedly and unimaginatively, they miss all the charming things that are not facts. ... Too much learning, like too little learning, is an unpleasant and dangerous thing.

A Second Mencken Chrestomathy: A New Selection from the Writings of America's Legendary Editor, Critic, and Wit (2006), 157.

Ordinarily he is insane, but he has lucid moments when he is only stupid.

People are born ignorant, not stupid; they are made stupid by education.

Science stands, a too competant servant, behind her wrangling underbred masters, holding out resources, devices, and remedies they are too stupid to use.  And on its material side, a modern Utopia must needs present these gifts as taken.

Somebody once observed to the eminent philosopher Wittgenstein how stupid medieval Europeans living before the time of Copernicus must have been that they could have looked at the sky and thought that the sun was circling the earth. Surely a modicum of astronomical good sense would have told them that the reverse was true. Wittgenstein is said to have replied: I agree. But I wonder what it would have looked like if the sun had been circling the earth.

Space exploration is risky. Its hard. And actually, let me say here that I feel like we need to take on more risk than we have been in space exploration. The public doesnt like risk, and they hate failure. But failures happen. They shouldnt happen for stupid reasons. But if they happen when you were trying something risky, you learn. That teaches you something. At least it should. And you try harder next time.

The believer has the whole world of wealth (Prov. 17: 6 LXX) and possesses all things as if he had nothing (2 Cor. 6: 10) by virtue of his attachment to you whom all things serve; yet he may know nothing about the circuits of the Great Bear. It is stupid to doubt that he is better than the person who measures the heaven and counts the stars and weighs the elements, but neglects you who have disposed everything by measure and number and weight (Wisd. 11: 21).

The great end of life is not knowledge, but action. What men need is as much knowledge as they can organize for action; give them more and it may become injurious. Some men are heavy and stupid from undigested learning.

The House is composed of very good men, not shining, but honest and reasonably well-informed, and in time will be found to improve, and not much inferior in eloquence, science, and dignity, to the British Commons. They are patriotic enough, and I believe there are more stupid (as well as more shining) people in the latter, in proportion.

The most hopelessly stupid man is he who is not aware that he is wise. 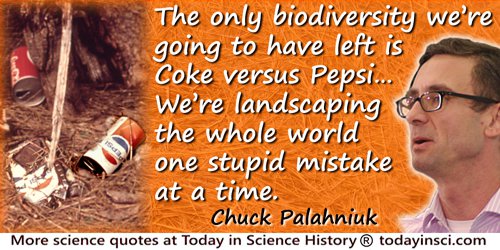 The only biodiversity were going to have left is Coke versus Pepsi.  Were landscaping the whole world one stupid mistake at a time.

The strength of the computer lies in its being a logic machine. It does precisely what it is programed to do. This makes it fast and precise. It also makes it a total moron; for logic is essentially stupid.

The trouble with the world is that the stupid are cocksure and the intelligent full of doubt.

The wise are instructed by reason; ordinary minds by experience; the stupid, by necessity; and brutes by instinct.

These estimates may well be enhanced by one from F. Klein (1849-1925), the leading German mathematician of the last quarter of the nineteenth century. Mathematics in general is fundamentally the science of self-evident things. ... If mathematics is indeed the science of self-evident things, mathematicians are a phenomenally stupid lot to waste the tons of good paper they do in proving the fact. Mathematics is abstract and it is hard, and any assertion that it is simple is true only in a severely technical sensethat of the modern postulational method which, as a matter of fact, was exploited by Euclid. The assumptions from which mathematics starts are simple; the rest is not.

This will end the mythology of the dumb little Dutch boy with his stupid finger in the dike to save his country.
On completion of new, technologically advanced sea barrier in the Netherlands

When a thing is said to be not worth refuting you may be sure that either it is flagrantly stupidin which case all comment is superfluousor it is something formidable, the very crux of the problem.

With fame I become more and more stupid, which, of course, is a very common phenomenon. There is far too great a disproportion between what one is and what others think one is, or at least what they say they think one is. But one has to take it all with good humor.

From Letter (Christmas 1919) to his friend Heinrich Zangger, in Einstein archives. Quoted by Helen Dukas and Banesh Hoffman, Albert Einstein: The Human Side (1979, 2013), 8.