... semantics ... is a sober and modest discipline which has no pretensions of being a universal patent-medicine for all the ills and diseases of mankind, whether imaginary or real. You will not find in semantics any remedy for decayed teeth or illusions of grandeur or class conflict. Nor is semantics a device for establishing that everyone except the speaker and his friends is speaking nonsense

In 'The Semantic Conception of Truth and the Foundations of Semantics', collected in Leonard Linsky (ed.), Semantics and the Philosophy of Language: A Collection of Readings (1952), 17.

A great discovery solves a great problem, but there is a grain of discovery in the solution of any problem. Your problem may be modest, but if it challenges your curiosity and brings into play your inventive faculties, and if you solve it by your own means, you may experience the tension and enjoy the triumph of discovery.

From Preface to the first printing, reprinted in How to Solve It: A New Aspect of Mathematical Method (2004), v.

But, on the other hand, every one who is seriously involved in the pursuit of science becomes convinced that a spirit is manifest in the laws of the Universea spirit vastly superior to that of man, and one in the face of which we with our modest powers must feel humble.

I would be the last to deny that the greatest scientific pioneers belonged to an aristocracy of the spirit and were exceptionally intelligent, something that we as modest investigators will never attain, no matter how much we exert ourselves. Nevertheless  I continue to believe that there is always room for anyone with average intelligence  to utilize his energy and  any man could, if he were so inclined, be the sculptor of his own brain, and that even the least gifted may, like the poorest land that has been well-cultivated and fertilized, produce an abundant harvest..

If I would be a young man again and had to decide how to make my living, I would not try to become a scientist or scholar or teacher. I would rather choose to be a plumber or a peddler in the hope to find that modest degree of independence still available under present circumstances.

According to Ralph Keyes, The Quote Verifier: Who Said What, Where, and When (2006), 53, on other occasions Einstein said he might rather have been a musician, or light-house keeper; however it is a popular misquotation that refers to being a watchmaker.

It is like the difference between a specialist and a philosopher. A specialist is someone who knows more and more about less and less until at last he knows everything about nothing. A philosopher is someone who knows less and less about more and more until at last he knows nothing about everything. Physics is now too philosophical. In my work I would like to reverse the process, and to try to limit the things to be found out and to make some modest discoveries which may later be useful.

It is the modest, not the presumptuous, inquirer who makes a real and safe progress in the discovery of divine truths. One follows Nature and Natures God; that is, he follows God in his works and in his word.

Man has never been a particularly modest or self-deprecatory animal, and physical theory bears witness to this no less than many other important activities. The idea that thought is the measure of all things, that there is such a thing as utter logical rigor, that conclusions can be drawn endowed with an inescapable necessity, that mathematics has an absolute validity and controls experiencethese are not the ideas of a modest animal. Not only do our theories betray these somewhat bumptious traits of self-appreciation, but especially obvious through them all is the thread of incorrigible optimism so characteristic of human beings. 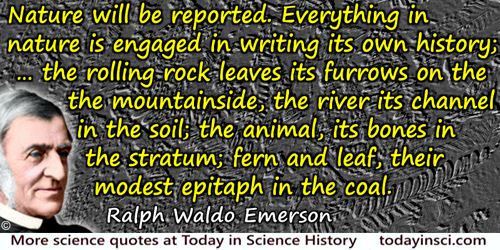 Nature will be reported. Everything in nature is engaged in writing its own history; the planet and the pebble are attended by their shadows, the rolling rock leaves its furrows on the mountain-side, the river its channel in the soil; the animal, its bones in the stratum; the fern and leaf, their modest epitaph in the coal.

Rachel Carson was the best thing America is capable of producing: a modest person, concerned, courageous, and profoundly rightall at the same time. Troubled by knowledge of an emerging threat to the web of life, she took pains to become informed, summoned her courage, breached her confines, and conveyed a diligently constructed message with eloquence enough to catalyze a new social movement. Her life addressed the promise and premise of being truly human.

The follow-on space shuttle program has fallen far short of the Apollo program in its appeal to human aspirations. The launching of the Hubble Space Telescope and the subsequent repair and servicing missions by skilled crews are highlights of the shuttles service to science.  Otherwise, the shuttles contribution to science has been modest, and its contribution to utilitarian applications of space technology has been insignificant.

The theory of evolution by natural selection is an ecological theory—founded on ecological observation by perhaps the greatest of all ecologists. It has been adopted by and brought up by the science of genetics, and ecologists, being modest people, are apt to forget their distinguished parenthood.

Vulnerable, like all men, to the temptations of arrogance, of which intellectual pride is the worst, he [the scientist] must nevertheless remain sincere and modest, if only because his studies constantly bring home to him that, compared with the gigantic aims of science, his own contribution, no matter how important, is only a drop in the ocean of truth.

[Wolfgang Bolyai] was extremely modest. No monument, said he, should stand over his grave, only an apple-tree, in memory of the three apples: the two of Eve and Paris, which made hell out of earth, and that of Newton, which elevated the earth again into the circle of the heavenly bodies.