Almost all of the space programs important advances in scientific knowledge have been accomplished by hundreds of robotic spacecraft in orbit about Earth and on missions to the distant planets Mercury, Venus, Mars, Jupiter, Saturn, Uranus, and Neptune. Robotic exploration of the planets and their satellites as well as of comets and asteroids has truly revolutionized our knowledge of the solar system.

Each part of the project had a specific task. These tasks were carefully allocated and supervised so that the sum of their parts would result in the accomplishment of our over-all mission.

Few people doubt that the Apollo missions to the Moon as well as the precursory Mercury and Gemini missions not only had a valuable role for the United States in its Cold War with the Soviet Union but also lifted the spirits of humankind. In addition, the returned samples of lunar surface material fueled important scientific discoveries.

Francis Galton, whose mission it seems to be to ride other men's hobbies to death, has invented the felicitous expression 'structureless germs'.

I feel that to be a director of a laboratory should not be, by definition, a permanent mission. People should have the courage to step down and go back to science. I believe you will never have a good director of a scientific laboratory unless that director knows he is prepared to become a scientist again.  I gave my contribution; I spent five years of my life to work hard for other peoples interest.  Its time to go back to science again. I have some wonderful ideas, I feel Im re-born.

I felt an awesome responsibility, and I took the responsibility very seriously, of being a role model and opening another door to black Americans, but the important thing is not that I am black, but that I did a good job as a scientist and an astronaut. There will be black astronauts flying in later missions  and they, too, will be people who excel, not simply who are black  who can ably represent their people, their communities, their country.

In describing the honourable mission I charged him with, M. Pernety informed me that he made my name known to you. This leads me to confess that I am not as completely unknown to you as you might believe, but that fearing the ridicule attached to a female scientist, I have previously taken the name of M. LeBlanc in communicating to you those notes that, no doubt, do not deserve the indulgence with which you have responded.
Explaining her use of a male psuedonym.

Later, I realized that the mission had to end in a let-down because the real barrier wasnt in the sky but in our knowledge and experience of supersonic flight.

Returning to the moon is an important step for our space program. Establishing an extended human presence on the moon could vastly reduce the costs of further space exploration, making possible ever more ambitious missions. Lifting heavy spacecraft and fuel out of the Earths gravity is expensive. Spacecraft assembled and provisioned on the moon could escape its far lower gravity using far less energy, and thus, far less cost. Also, the moon is home to abundant resources. Its soil contains raw materials that might be harvested and processed into rocket fuel or breathable air. We can use our time on the moon to develop and test new approaches and technologies and systems that will allow us to function in other, more challenging environments. The moon is a logical step toward further progress and achievement. 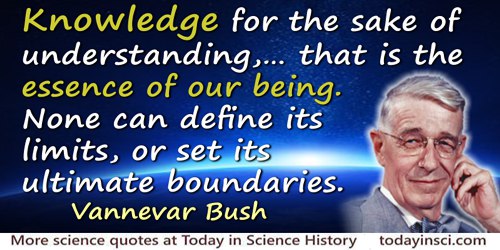 Science has a simple faith, which transcends utility. Nearly all men of science, all men of learning for that matter, and men of simple ways too, have it in some form and in some degree. It is the faith that it is the privilege of man to learn to understand, and that this is his mission. If we abandon that mission under stress we shall abandon it forever, for stress will not cease. Knowledge for the sake of understanding, not merely to prevail, that is the essence of our being. None can define its limits, or set its ultimate boundaries.

So there he is at last. Man on the moon. The poor magnificent bungler! He can't even get to the office without undergoing the agonies of the damned, but give him a little metal, a few chemicals, some wire and twenty or thirty billion dollars and, vroom! there he is, up on a rock a quarter of a million miles up in the sky.
[Written when the first manned mission to the Moon, Apollo 11, landed (20 Jul 1969).]

The follow-on space shuttle program has fallen far short of the Apollo program in its appeal to human aspirations. The launching of the Hubble Space Telescope and the subsequent repair and servicing missions by skilled crews are highlights of the shuttles service to science.  Otherwise, the shuttles contribution to science has been modest, and its contribution to utilitarian applications of space technology has been insignificant.

The success of Apollo was mainly due to the fact that the project was conceived and honestly presented to the public as an international sporting event and not as a contribution to science. The order of priorities in Apollo was accurately reflected by the first item to be unloaded after each landing on the Moon's surface, the television camera. The landing, the coming and going of the astronauts, the exploring of the moon's surface, the gathering of Moon rocks and the earthward departure, all were expertly choreographed with the cameras placed in the right positions to make a dramatic show on television. This was to me the great surprise of the Apollo missions. There was nothing surprising in the fact that astronauts could walk on the Moon and bring home Moon rocks. There were no big scientific surprises in the chemistry of the Moon rocks or in the results of magnetic and seismic observations that the astronauts carried out. The big surprise was the quality of the public entertainment that the missions provided. I had never expected that we would see in real time astronauts hopping around in lunar gravity and driving their Rover down the Lincoln- Lee scarp to claim a lunar speed record of eleven miles per hour. Intensive television coverage was the driving force of Apollo. Von Braun had not imagined the possibilities of television when he decided that one kilohertz would be an adequate communication bandwidth for his Mars Project.

This has been far more than three men on a mission to the Moon; more still than the efforts of a government and industry team; more, even, than the efforts of one nation. We feel this stands as a symbol of the insatiable curiosity of all mankind to explore the unknown.

This is in a real sense the capstone of the initial missions to explore the planets. Pluto, its moons and this part of the solar system are such mysteries that New Horizons will rewrite all of the textbooks.

We will undertake extended human missions to the moon as early as 2015, with the goal of living and working there for increasingly extended periods.

When every fact, every present or past phenomenon of that universe, every phase of present or past life therein, has been examined, classified, and co-ordinated with the rest, then the mission of science will be completed. What is this but saying that the task of science can never end till man ceases to be, till history is no longer made, and development itself ceases?

With the experience and knowledge gained on the moon, we will then be ready to take the next steps of space exploration: human missions to Mars and to worlds beyond.

[My work as a photographer is a] mission to document endangered species and landscapes in order to show a world worth saving.