As long as a branch of science offers an abundance of problems, so long it is alive; a lack of problems foreshadows extinction or the cessation of independent development.

Believing, as I do, in the continuity of nature, I cannot stop abruptly where our microscopes cease to be of use. Here the vision of the mind authoritatively supplements the vision of the eye. By a necessity engendered and justified by science I cross the boundary of the experimental evidence, and discern in that Matter which we, in our ignorance of its latent powers, and notwithstanding our professed reverence for its Creator, have hitherto covered with opprobrium, the promise and potency of all terrestrial Life.

'Address Delivered Before The British Association Assembled at Belfast', (19 Aug 1874). Fragments of Science for Unscientific People: A Series of Detached Essays, Lectures, and Reviews (1892), Vol. 2, 191. 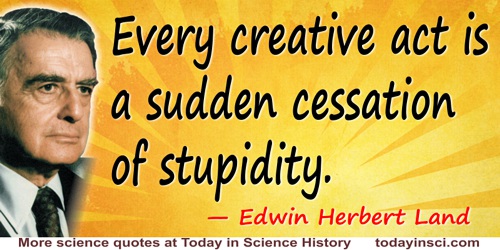 Every creative act is a sudden cessation of stupidity. 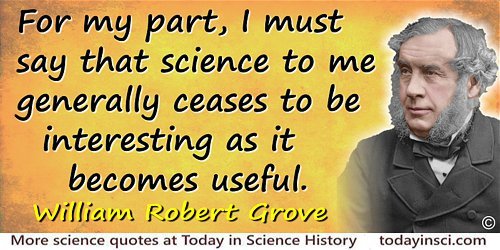 For my part, I must say that science to me generally ceases to be interesting as it becomes useful.

It was through living among these groups and much more I think, through moving regularly from one to the other and back again that I got occupied with the problem of what, long before I put it on paper, I christened to myself as the ŌĆśtwo culturesŌĆÖ. For constantly I felt I was moving among two groups [scientists and literary intellectuals] comparable in intelligence, identical in race, not grossly different in social origin, earning about the same incomes, who had almost ceased to communicate at all, who in intellectual, moral and psychological climate had so little in common that instead of going from Burlington House or South Kensington to Chelsea, one might have crossed an ocean.

The Two Cultures: The Rede Lecture (1959), 2. The places mentioned are all in London. Burlington House is the home of the Royal Society and South Kensington is the site of the Natural History Museum, whereas Chelsea represents an affluent centre of artistic life.

Like other addictions, tobacco use can be effectively treated. A wide variety of behavioral interventions have been used for years. In recognition of the important role that nicotine plays in maintaining tobacco use, nicotine replacement therapy is now available. Nicotine gum has been shown to relieve withdrawal symptoms following smoking cessation, and may enhance the effectiveness of behavioral treatments. These treatment measures should be made more widely available to smokers who need them. Unfortunately most party payors do not provide coverage for smoking cessation treatments. On the other hand, treatment for alcoholism and illicit drug use is often covered. And we should eliminate this double standard.

From press conference (16 May 1988) by C. Everett Koop for Surgeon GeneralŌĆÖs Report-Smoking & Nicotine Addiction being released that day. [In the present time, through the Affordable Care Act many public and private plans are required to cover all seven FDA-approved quit-smoking medications ŌĆöWebmaster.]

One of the grandest generalizations formulated by modern biological science is that of the continuity of life; the protoplasmic activity within each living body now on earth has continued without cessation from the remote beginnings of life on our planet, and from that period until the present no single organism has ever arisen save in the form of a bit of living protoplasm detached from a pre-existing portion; the eternal flame of life once kindled upon this earth has passed from organism to organism, and is still, going on existing and propagating, incarnated within the myriad animal and plant forms of everyday life.

Peace cannot be obtained by wishing for it. We live in the same world with Russia, whose leader has said he ŌĆ£wants to bury usŌĆØŌĆöand he means it. Disarmament, the cessation of tests, will not automatically bring us closer to peace.

The evolution of higher and of lower forms of life is as well and as soundly established as the eternal hills. It has long since ceased to be a theory; it is a law of Nature as universal in living things as is the law of gravitation in material things and in the motions of the heavenly spheres.

When every fact, every present or past phenomenon of that universe, every phase of present or past life therein, has been examined, classified, and co-ordinated with the rest, then the mission of science will be completed. What is this but saying that the task of science can never end till man ceases to be, till history is no longer made, and development itself ceases?

When rich men are thus brought to regard themselves as trustees, and poor men learn to be industrious, economical, temperate, self-denying, and diligent in the acquisition of knowledge, then the deplorable strife between capital and labor, tending to destroy their fundamental, necessary, and irrefragable harmony will cease, and the world will no longer be afflicted with such unnatural industrial conflicts as we have seen during the past century...

ŌĆ£Unless,ŌĆØ said I [Socrates], ŌĆ£either philosophers become kings in our states or those whom we now call our kings and rulers take to the pursuit of' philosophy seriously and adequately, and there is a conjunction of these two things, political power and philosophic intelligence, while the motley horde of the natures who at present pursue either apart from the other are compulsorily excluded, there can be no cessation of troubles, dear Glaucon, for our states, nor, I fancy for the human race either. Nor, until this happens, will this constitution which we have been expounding in theory ever be put into practice within the limits of possibility and see the light of the sun.ŌĆØ