Agnosticism is of the essence of science, whether ancient or modern. It simply means that a man shall not say he knows or believes that for which he has no grounds for professing to believe.

Ask a scientist what he conceives the scientific method to be, and he will adopt an expression that is at once solemn and shifty eyed: solemn because he feels he ought to declare an opinion; shifty eyed because he is wondering how to conceal the fact that he has no opinion to declare. If taunted he would probably mumble something about Induction and Establishing the Laws of Nature, but if anyone working in a laboratory professed to be trying to establish the Laws of Nature by induction, we should think he was overdue for leave.

Believing, as I do, in the continuity of nature, I cannot stop abruptly where our microscopes cease to be of use. Here the vision of the mind authoritatively supplements the vision of the eye. By a necessity engendered and justified by science I cross the boundary of the experimental evidence, and discern in that Matter which we, in our ignorance of its latent powers, and notwithstanding our professed reverence for its Creator, have hitherto covered with opprobrium, the promise and potency of all terrestrial Life.

'Address Delivered Before The British Association Assembled at Belfast', (19 Aug 1874). Fragments of Science for Unscientific People: A Series of Detached Essays, Lectures, and Reviews (1892), Vol. 2, 191.

I do not profess to be able thus to account for all the [planetary] motions at the same time; but I shall show that each by itself is well explained by its proper hypothesis.

I dont profess to be profound, but I do lay claim to common sense.

I know not what fatal calamity has invaded the sciences, for when an error is born with them and with the lapse of time becomes as it were fixed, those who profess the science will not suffer its withdrawal.

Essays of Jean Rey, Doctor of Medicine, on an Enquiry into the Cause Wherefore Tin and Lead Increase in Weight on Calcination (1630). Translated in Alembic Club Reprint No. 11, (1895) 25. 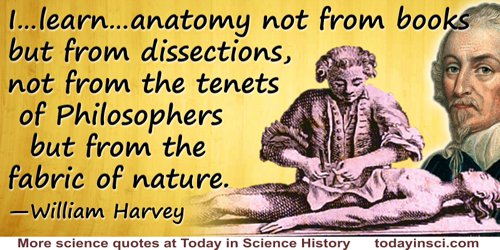 I profess to learn and to teach anatomy not from books but from dissections, not from the tenets of Philosophers but from the fabric of Nature.

De Motu Cordis (1628), The Circulation of the Blood and Other Writings, trans. Kenneth J. Franklin (1957), Dedication to Doctor Argent, 7.

If to be the Author of new things, be a crime; how will the first Civilizers of Men, and makers of Laws, and Founders of Governments escape? Whatever now delights us in the Works of Nature, that excells the rudeness of the first Creation, is New. Whatever we see in Cities, or Houses, above the first wildness of Fields, and meaness of Cottages, and nakedness of Men, had its time, when this imputation of Novelty, might as well have bin laid to its charge. It is not therefore an offence, to profess the introduction of New things, unless that which is introduc'd prove pernicious in itself; or cannot be brought in, without the extirpation of others, that are better.

If [science] tends to thicken the crust of ice on which, as it were, we are skating, it is all right. If it tries to find, or professes to have found, the solid ground at the bottom of the water it is all wrong. Our business is with the thickening of this crust by extending our knowledge downward from above, as ice gets thicker while the frost lasts; we should not try to freeze upwards from the bottom.

Logic has borrowed the rules of geometry without understanding its power.  I am far from placing logicians by the side of geometers who teach the true way to guide the reason.  The method of avoiding error is sought by every one. The logicians profess to lead the way, the geometers alone reach it, and aside from their science there is no true demonstration.

Medicine is a science which hath been (as we have said) more professed than laboured, and yet more laboured than advanced: the labour having been, in my judgment, rather in circle than in progression. For I find much iteration, but small addition. It considereth causes of diseases, with the occasions or impulsions; the diseases themselves, with the accidents; and the cures, with the preservation.

Sir how pitiable is it to reflect, that altho you were so fully convinced of the benevolence of the Father of mankind, and of his equal and impartial distribution of those rights and privileges which he had conferred upon them, that you should at the Same time counteract his mercies, in detaining by fraud and violence so numerous a part of my brethren under groaning captivity and cruel oppression, that you should at the Same time be found guilty of that most criminal act, which you professedly detested in others, with respect to yourselves.

That form of popular science which merely recites the results of investigations, which merely communicates useful knowledge, is from this standpoint bad science, or no science at all.  Apply this test to every work professing to give a popular account of any branch of science. If any such work gives a description of phenomena that appeals to his imagination rather than to his reason, then it is bad science.

The authority of those who profess to teach is often a positive hindrance to those who desire to learn.

Therefore on long pondering this uncertainty of mathematical traditions on the deduction of the motions of the system of the spheres, I began to feel disgusted that no more certain theory of the motions of the mechanisms of the universe, which has been established for us by the best and most systematic craftsman of all, was agreed by the philosophers, who otherwise theorised so minutely with most careful attention to the details of this system. I therefore set myself the task of reading again the books of all philosophers which were available to me, to search out whether anyone had ever believed that the motions of the spheres of the, universe were other than was supposed by those who professed mathematics in the schools.

We claim to be more moral than other nations, and to conquer and govern and tax and plunder weaker peoples for their good! While robbing them we actually claim to be benefactors! And then we wonder, or profess to wonder, why other Governments hate us! Are they not fully justified in hating us? Is it surprising that they seek every means to annoy us, that they struggle to get navies to compete with us, and look forward to a time when some two or three of them may combine together and thoroughly humble and cripple us? And who can deny that any just Being, looking at all the nations of the earth with impartiality and thorough knowledge, would decide that we deserve to be humbled, and that it might do us good?