Beyond lonely Pluto, dark and shadowless, lies the glittering realm of interstellar space, the silent ocean that rolls on and on, past stars and galaxies alike, to the ends of the Universe. What do men know of this vast infinity, this shoreless ocean? Is it hostile or friendlyor merely indifferent?

Everyone is aware of the difficult and menacing situation in which human societyshrunk into one community with a common fatenow finds itself, but only a few act accordingly. Most people go on living their every-day life: half frightened, half indifferent, they behold the ghostly tragicomedy which is being performed on the international stage before the eyes and ears of the world. But on that stage, on which the actors under the floodlights play their ordained parts, our fate of tomorrow, life or death of the nations, is being decided.

If they should make the standard for the measure, we call a Chancellors foot; what an uncertain measure would this be? One Chancellor has a long foot, another a short foot, a third an indifferent foot.

In early times, when the knowledge of nature was small, little attempt was made to divide science into parts, and men of science did not specialize. Aristotle was a master of all science known in his day, and wrote indifferently treatises on physics or animals. As increasing knowledge made it impossible for any one man to grasp all scientific subjects, lines of division were drawn for convenience of study and of teaching. Besides the broad distinction into physical and biological science, minute subdivisions arose, and, at a certain stage of development, much attention was, given to methods of classification, and much emphasis laid on the results, which were thought to have a significance beyond that of the mere convenience of mankind.
But we have reached the stage when the different streams of knowledge, followed by the different sciences, are coalescing, and the artificial barriers raised by calling those sciences by different names are breaking down. Geology uses the methods and data of physics, chemistry and biology; no one can say whether the science of radioactivity is to be classed as chemistry or physics, or whether sociology is properly grouped with biology or economics. Indeed, it is often just where this coalescence of two subjects occurs, when some connecting channel between them is opened suddenly, that the most striking advances in knowledge take place. The accumulated experience of one department of science, and the special methods which have been developed to deal with its problems, become suddenly available in the domain of another department, and many questions insoluble before may find answers in the new light cast upon them. Such considerations show us that science is in reality one, though we may agree to look on it now from one side and now from another as we approach it from the standpoint of physics, physiology or psychology.

It is a great deal easier to believe in the existence of parapsychological phenomena, if one is ignorant of, or indifferent to, the nature of scientific evidence.

Epigraph in Isaac Asimovs Book of Science and Nature Quotations (1988), 207. 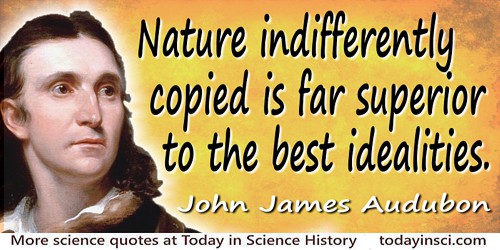 Nature indifferently copied is far superior to the best idealities.

Journal entry (1 Mar 1827). On an artists goal to faithfully reproduce nature as actually observed, not stylized or contrived. He explained this credo a young artist (J.B. Kidd, age 19) over breakfast. Stated in John James Audubon and Mrs. Audubon (ed.), The Life and Adventures of John James Audubon, the Naturalist (1868), 140.

Pure mathematics  reveals itself as nothing but symbolic or formal logic. It is concerned with implications, not applications. On the other hand, natural science, which is empirical and ultimately dependent upon observation and experiment, and therefore incapable of absolute exactness, cannot become strictly mathematical. The certainty of geometry is thus merely the certainty with which conclusions follow from non-contradictory premises. As to whether these conclusions are true of the material world or not, pure mathematics is indifferent.

Study the hindrances, acquaint yourself with the causes which have led up to the disease. Dont guess at them, but know them through and through if you can; and if you do not know them, know that you do not, and still inquire. Cannot is a word for the idle, the indifferent, the self-satisfied, but it is not admissible in science. I do not know is manly if it does not stop there, but to say I cannot is a judgment both entirely illogical, and in itself bad as favouring rest in ignorance.

The pursuit of mathematical science makes its votary appear singularly indifferent to the ordinary interests and cares of men. Seeking eternal truths, and finding his pleasures in the realities of form and number, he has little interest in the disputes and contentions of the passing hour. His views on social and political questions partake of the grandeur of his favorite contemplations, and, while careful to throw his mite of influence on the side of right and truth, he is content to abide the workings of those general laws by which he doubts not that the fluctuations of human history are as unerringly guided as are the perturbations of the planetary hosts.

Truth is an abstract word which most men use indifferently in their books and judgments, for error and falsehood.

We should be most careful about retreating from the specific challenge of our age. We should be reluctant to turn our back upon the frontier of this epoch We cannot be indifferent to space, because the grand slow march of our intelligence has brought us, in our generation, to a point from which we can explore and understand and utilize it. To turn back now would be to deny our history, our capabilities.