Apparently separate parts of the world would be deeply and conspiratorially entangled, and our apparent free will would be entangled with them.

But here I stopshort of any deterministic speculation that attributes specific behaviors to the possession of specific altruist or opportunist genes. Our genetic makeup permits a wide range of behaviorsfrom Ebenezer Scrooge before to Ebenezer Scrooge after. I do not believe that the miser hoards through opportunist genes or that the philanthropist gives because nature endowed him with more than the normal complement of altruist genes. Upbringing, culture, class, status, and all the intangibles that we call free will, determine how we restrict our behaviors from the wide spectrumextreme altruism to extreme selfishnessthat our genes permit. 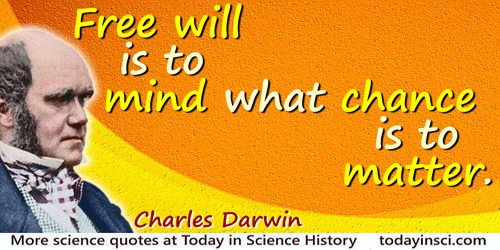 Free will is to mind what chance is to matter.

From this fountain (the free will of God) it is those laws, which we call the laws of nature, have flowed, in which there appear many traces of the most wise contrivance, but not the least shadow of necessity. These therefore we must not seek from uncertain conjectures, but learn them from observations and experimental. He who is presumptuous enough to think that he can find the true principles of physics and the laws of natural things by the force alone of his own mind, and the internal light of his reason, must either suppose the world exists by necessity, and by the same necessity follows the law proposed; or if the order of Nature was established by the will of God, the [man] himself, a miserable reptile, can tell what was fittest to be done. 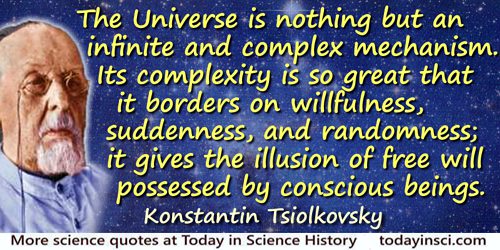 I recognize nothing that is not material. In physics, chemistry and biology I see only mechanics. The Universe is nothing but an infinite and complex mechanism. Its complexity is so great that it borders on willfulness, suddenness, and randomness; it gives the illusion of free will possessed by conscious beings.

Many scientists have tried to make determinism and complementarity the basis of conclusions that seem to me weak and dangerous; for instance, they have used Heisenbergs uncertainty principle to bolster up human free will, though his principle, which applies exclusively to the behavior of electrons and is the direct result of microphysical measurement techniques, has nothing to do with human freedom of choice. It is far safer and wiser that the physicist remain on the solid ground of theoretical physics itself and eschew the shifting sands of philosophic extrapolations.

Overwhelming evidences of an intelligence and benevolent intention surround us, show us the whole of nature through the work of a free will and teach us that all alive beings depend on an eternal creator-ruler.

The Astonishing Hypothesis is that You, your joys and your sorrows, your memories and your ambitions, your sense of identity and free will, are in fact no more than the behaviour of a vast assembly of nerve cells and their associated molecules. As Lewis Carrolls Alice might have phrased it: Youre nothing but a pack of neurons.

In 'Introduction', The Astonishing Hypothesis: The Scientific Search for Soul (1994), 3.

The contingency of history (both for life in general and for the cultures of Homo sapiens) and human free will (in the factual rather than theological sense) are conjoined concepts, and no better evidence can be produced than the experimental production of markedly different solutions in identical environments.

Though genius isn't something that can be produced arbitrarily, it is freely willedlike wit, love, and faith, which one day will have to become arts and sciences. You should demand genius from everyone, but not expect it. A Kantian would call this the categorical imperative of genius.

To take one of the simplest cases of the dissipation of energy, the conduction of heat through a solidconsider a bar of metal warmer at one end than the other and left to itself. To avoid all needless complication, of taking loss or gain of heat into account, imagine the bar to be varnished with a substance impermeable to heat. For the sake of definiteness, imagine the bar to be first given with one half of it at one uniform temperature, and the other half of it at another uniform temperature. Instantly a diffusing of heat commences, and the distribution of temperature becomes continuously less and less unequal, tending to perfect uniformity, but never in any finite time attaining perfectly to this ultimate condition. This process of diffusion could be perfectly prevented by an army of Maxwells intelligent demons* stationed at the surface, or interface as we may call it with Prof. James Thomson, separating the hot from the cold part of the bar.
* The definition of a demon, according to the use of this word by Maxwell, is an intelligent being endowed with free will, and fine enough tactile and perceptive organisation to give him the faculty of observing and influencing individual molecules of matter.

When intelligent machines are constructed, we should not be surprised to find them as confused and as stubborn as men in their convictions about mind-matter, consciousness, free will, and the like.

When people talk of atoms obeying fixed laws, they are either ascribing some kind of intelligence and free will to atoms or they are talking nonsense. There is no obedience unless there is at any rate a potentiality of disobeying.