According to Democritus, atoms had lost the qualities like colour, taste, etc., they only occupied space, but geometrical assertions about atoms were admissible and required no further analysis. In modern physics, atoms lose this last property, they possess geometrical qualities in no higher degree than colour, taste, etc. The atom of modern physics can only be symbolized by a partial differential equation in an abstract multidimensional space. Only the experiment of an observer forces the atom to indicate a position, a colour and a quantity of heat. All the qualities of the atom of modern physics are derived, it has no immediate and direct physical properties at all, i.e. every type of visual conception we might wish to design is, eo ipso, faulty. An understanding of 'the first order' is, I would almost say by definition, impossible for the world of atoms.

At the beginning of this debate Stephen [Hawking] said that he thinks that he is a positivist, whereas I am a Platonist. I am happy with him being a positivist, but I think that the crucial point here is, rather, that I am a realist. Also, if one compares this debate with the famous debate of Bohr and Einstein, some seventy years ago, I should think that Stephen plays the role of Bohr, whereas I play Einstein's role! For Einstein argued that there should exist something like a real world, not necessarily represented by a wave function, whereas Bohr stressed that the wave function doesn't describe a 'real' microworld but only 'knowledge' that is useful for making predictions.

Debate at the Isaac Newton Institute of the Mathematical Sciences, Cambridge University (1994), transcribed in Stephen Hawking and Roger Penrose, The Nature of Space and Time (1996), 134-135.

Can quantum mechanics represent the fact that an electron finds itself approximately in a given place and that it moves approximately with a given velocity, and can we make these approximations so close that they do not cause experimental difficulties?

Physics and Beyond: Encounters and Conversations, trans. Arnold J. Pomerans (1971), 78.

I have tried to read philosophers of all ages and have found many illuminating ideas but no steady progress toward deeper knowledge and understanding. Science, however, gives me the feeling of steady progress: I am convinced that theoretical physics is actual philosophy. It has revolutionized fundamental concepts, e.g., about space and time (relativity), about causality (quantum theory), and about substance and matter (atomistics), and it has taught us new methods of thinking (complementarity) which are applicable far beyond physics.

It is not surprising that our language should be incapable of describing the processes occurring within the atoms, for, as has been remarked, it was invented to describe the experiences of daily life, and these consists only of processes involving exceedingly large numbers of atoms. Furthermore, it is very difficult to modify our language so that it will be able to describe these atomic processes, for words can only describe things of which we can form mental pictures, and this ability, too, is a result of daily experience. Fortunately, mathematics is not subject to this limitation, and it has been possible to invent a mathematical schemethe quantum theorywhich seems entirely adequate for the treatment of atomic processes; for visualization, however, we must content ourselves with two incomplete analogiesthe wave picture and the corpuscular picture.

It seems sensible to discard all hope of observing hitherto unobservable quantities, such as the position and period of the electron... Instead it seems more reasonable to try to establish a theoretical quantum mechanics, analogous to classical mechanics, but in which only relations between observable quantities occur.

In Helge Kragh, Quantum Generations: A History of Physics in the Twentieth Century (1999), 161.

Many scientists have tried to make determinism and complementarity the basis of conclusions that seem to me weak and dangerous; for instance, they have used Heisenbergs uncertainty principle to bolster up human free will, though his principle, which applies exclusively to the behavior of electrons and is the direct result of microphysical measurement techniques, has nothing to do with human freedom of choice. It is far safer and wiser that the physicist remain on the solid ground of theoretical physics itself and eschew the shifting sands of philosophic extrapolations.

Memories are not recycled like atoms and particles in quantum physics. They can be lost forever.

Quantum mechanics is certainly imposing. But an inner voice tells me that this is not yet the real thing. The theory says a lot, but does not bring us any closer to the secrets of the Old One. I, at any rate, am convinced that He is not playing at dice. 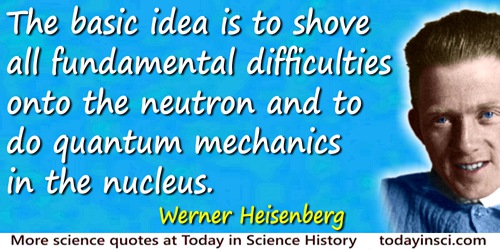 The basic idea is to shove all fundamental difficulties onto the neutron and to do quantum mechanics in the nucleus.

The incomplete knowledge of a system must be an essential part of every formulation in quantum theory. Quantum theoretical laws must be of a statistical kind. To give an example: we know that the radium atom emits alpha-radiation. Quantum theory can give us an indication of the probability that the alpha-particle will leave the nucleus in unit time, but it cannot predict at what precise point in time the emission will occur, for this is uncertain in principle.

The mathematical framework of quantum theory has passed countless successful tests and is now universally accepted as a consistent and accurate description of all atomic phenomena. The verbal interpretation, on the other hand, i.e. the metaphysics of quantum physics, is on far less solid ground. In fact, in more than forty years physicists have not been able to provide a clear metaphysical model.

In The Tao of Physics: An Exploration of the Parallels Between Modern Physics (1975), 132.

The prevailing trend in modern physics is thus much against any sort of view giving primacy to ... undivided wholeness of flowing movement. Indeed, those aspects of relativity theory and quantum theory which do suggest the need for such a view tend to be de-emphasized and in fact hardly noticed by most physicists, because they are regarded largely as features of the mathematical calculus and not as indications of the real nature of things.

The ultimate origin of the difficulty lies in the fact (or philosophical principle) that we are compelled to use the words of common language when we wish to describe a phenomenon, not by logical or mathematical analysis, but by a picture appealing to the imagination. Common language has grown by everyday experience and can never surpass these limits. Classical physics has restricted itself to the use of concepts of this kind; by analysing visible motions it has developed two ways of representing them by elementary processes; moving particles and waves. There is no other way of giving a pictorial description of motionswe have to apply it even in the region of atomic processes, where classical physics breaks down.

Thus one becomes entangled in contradictions if one speaks of the probable position of the electron without considering the experiment used to determine it ... It must also be emphasized that the statistical character of the relation depends on the fact that the influence of the measuring device is treated in a different manner than the interaction of the various parts of the system on one another. This last interaction also causes changes in the direction of the vector representing the system in the Hilbert space, but these are completely determined. If one were to treat the measuring device as a part of the system—which would necessitate an extension of the Hilbert space—then the changes considered above as indeterminate would appear determinate. But no use could be made of this determinateness unless our observation of the measuring device were free of indeterminateness. For these observations, however, the same considerations are valid as those given above, and we should be forced, for example, to include our own eyes as part of the system, and so on. The chain of cause and effect could be quantitatively verified only if the whole universe were considered as a single system—but then physics has vanished, and only a mathematical scheme remains. The partition of the world into observing and observed system prevents a sharp formulation of the law of cause and effect. (The observing system need not always be a human being; it may also be an inanimate apparatus, such as a photographic plate.)

Today scientists describe the universe in terms of two basic partial theories—the general theory of relativity and quantum mechanics. They are the great intellectual achievements of the first half of this century. The general theory of relativity describes the force of gravity and the large-scale structure of the universe, that is, the structure on scales from only a few miles to as large as a million million million million (1 with twenty-four zeros after it) miles, the size of the observable universe. Quantum mechanics, on the other hand, deals with phenomena on extremely small scales, such as a millionth of a millionth of an inch. Unfortunately, however, these two theories are known to be inconsistent with each other—they cannot both be correct.