Genuine student answer* to an Acoustics, Light and Heat paper (1880), Science and Art Department, South Kensington, London, collected by Prof. Oliver Lodge. Quoted in Henry B. Wheatley, Literary Blunders (1893), 182-3, Question 29. (*From a collection in which Answers are not given verbatim et literatim, and some instances may combine several students' blunders.) 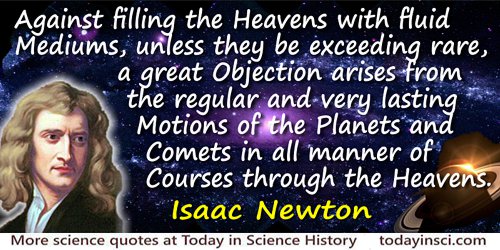 Against filling the Heavens with fluid Mediums, unless they be exceeding rare, a great Objection arises from the regular and very lasting Motions of the Planets and Comets in all manner of Courses through the Heavens.

From Opticks: Or, A Treatise of the Reflections, Refractions, Inflections and Colours of Light (1718), 339.

Are not all Hypotheses erroneous, in which Light is supposed to consist in Pression or Motion, propagated through a fluid Medium? For in all these Hypotheses the Phaenomena of Light have been hitherto explain'd by supposing that they arise from new Modifications of the Rays; which is an erroneous Supposition.

Built up of carbon, hydrogen, oxygen, nitrogen, together with traces of a few other elements, yet of a complexity of structure that has hitherto resisted all attempts at complete analysis, protoplasm is at once the most enduring and the most easily destroyed of substances; its molecules are constantly breaking down to furnish the power for the manifestations of vital phenomena, and yet, through its remarkable property of assimilation, a power possessed by nothing else upon earth, it constantly builds up its substance anew from the surrounding medium.

In fact, whenever energy is transmitted from one body to another in time, there must be a medium or substance in which the energy exists after it leaves one body and before it reaches the other ... and if we admit this medium as an hypothesis, I think it ought to occupy a prominent place in our investigations, and that we ought to endeavour to construct a mental representation of all the details of its action, and this has been my constant aim in this treatise.

The medium is the message.

The most remarkable feature about the magnitude scale was that it worked at all and that it could be extended on a worldwide basis. It was originally envisaged as a rather rough-and-ready procedure by which we could grade earthquakes. We would have been happy if we could have assigned just three categories, large, medium, and small; the point is, we wanted to avoid personal judgments. It actually turned out to be quite a finely tuned scale.

We have not done the things that are necessary to lower emissions because these things fundamentally conflict with deregulated capitalismâ€¦ We are stuck because the actions that would give us the best chance of averting catastropheâ€“and would benefit the vast majorityâ€“are extremely threatening to an elite minority that has a stranglehold over our economy, our political process, and most of our major media outlets.

When ultra-violet light acts on a mixture of water, carbon dioxide, and ammonia, a vast variety of organic substances are made, including sugars and apparently some of the materials from which proteins are built upâ€¦. But before the origin of life they must have accumulated till the primitive oceans reached the consistency of hot dilute soupâ€¦. The first living or half-living things were probably large molecules synthesized under the influence of the sunâ€™s radiation, and only capable of reproduction in the particularly favorable medium in which they originatedâ€¦.