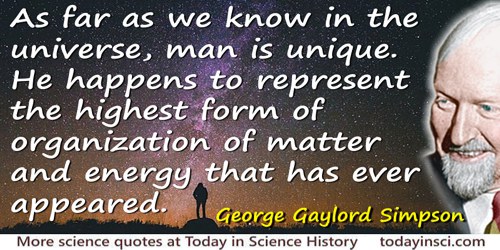 As far as we know in the universe, man is unique. He happens to represent the highest form of organization of matter and energy that has ever appeared.

Every individual alive today, even the very highest, is to be derived in an unbroken line from the first and lowest forms.

In Heredity (1892), Vol. 1, 161. As cited in James C. Fernald Scientific Side-lights: Illustrating Thousands of Topics by Selections from Standard Works of the Masters of Science Throughout the World (1903), 394.

If the national park idea is, as Lord Bryce suggested, the best idea America ever had, wilderness preservation is the highest refinement of that idea.

If we would indicate an idea  striving to remove the barriers which prejudice and limited views of every kind have erected among men, and to treat all mankind, without reference to religion, nation, or color, as one fraternity, one great community, fitted for the attainment of one object, the unrestrained development of the physical powers. This is the ultimate and highest aim of society.

It is still false to conclude that man is nothing but the highest animal, or the most progressive product of organic evolution. He is also a fundamentally new sort of animal and one in which, although organic evolution continues on its way, a fundamentally new sort of evolution has also appeared. The basis of this new sort of evolution is a new sort of heredity, the inheritance of learning. This sort of heredity appears modestly in other mammals and even lower in the animal kingdom, but in man it has incomparably fuller development and it combines with man's other characteristics unique in degree with a result that cannot be considered unique only in degree but must also be considered unique in kind.

In The Meaning of Evolution: A Study of the History of Life and of its Significance for Man (1949), 286.

Man has risen, not fallen. He can choose to develop his capacities as the highest animal and to try to rise still farther, or he can choose otherwise. The choice is his responsibility, and his alone. There is no automatism that will carry him upward without choice or effort and there is no trend solely in the right direction. Evolution has no purpose; man must supply this for himself. The means to gaining right ends involve both organic evolution and human evolution, but human choice as to what are the right ends must be based on human evolution.

The Meaning of Evolution: A Study of the History of Life and of its Significance for Man (1949), 310.

Man is the highest product of his own history. The discoverer finds nothing so grand or tall as himself, nothing so valuable to him. The greatest star is at the small end of the telescope, the star that is looking, not looked after nor looked at.

In Theodore Parker and Rufus Leighton (ed.), Lessons from the World of Matter and the World of Man: Selected from Notes of Unpublished Sermons (1865), 70.

One indicator of Ernest Lawrences influence is the fact that I am the eighth member of his laboratory staff to receive the highest award that can come to a scientistthe Nobel Prize.

Only when Genius is married to Science can the highest results be produced.

Science  is creating a firm and living faith in the existence of immutable moral and physical laws, perfect obedience to which is the highest possible aim of an intelligent being.

The number of mathematical students  would be much augmented if those who hold the highest rank in science would condescend to give more effective assistance in clearing the elements of the difficulties which they present.

In Study and Difficulties of Mathematics (1902), Preface.

The purpose of the history of science is to establish the genesis and the development of scientific facts and ideas, taking into account all intellectual exchanges and all influences brought into play by the very progress of civilization. It is indeed a history of civilization considered from its highest point of view. The center of interest is the evolution of science, but general history remains always in the background.

The successful launching of the Sputnik was a demonstration of one of the highest scientific and technological achievements of mana tantalizing invitation both to the militarist in search of ever more devastating means of destruction and to the astronomer searching for new means of carrying his instruments away from their earthbound environment.

We may, perhaps, imagine that the creation was finished long ago. But that would be quite wrong. It continues still more magnificently, and at the highest levels of the world.

What can you conceive more silly and extravagant than to suppose a man racking his brains, and studying night and day how to fly? ... wearying himself with climbing upon every ascent, ... bruising himself with continual falls, and at last breaking his neck? And all this, from an imagination that it would be glorious to have the eyes of people looking up at him, and mighty happy to eat, and drink, and sleep, at the top of the highest trees in the kingdom.

In A Serious Call to a Devout and Holy Life (1732), 168. This was written before Montgolfier brothers, pioneer balloonists, were born.

When we have amassed a great store of such general facts, they become the objects of another and higher species of classification, and are themselves included in laws which, as they dispose of groups, not individuals have a far superior degree of generality, till at length, by continuing the process, we arrive at axioms of the highest degree of generality of which science is capable. This process is what we mean by induction.

In A Preliminary Discourse on the Study of Natural Philosophy (1830), 102.

Whoever looks at the insect world, at flies, aphides, gnats and innumerable parasites, and even at the infant mammals, must have remarked the extreme content they take in suction, which constitutes the main business of their life. If we go into a library or newsroom, we see the same function on a higher plane, performed with like ardor, with equal impatience of interruption, indicating the sweetness of the act. In the highest civilization the book is still the highest delight.

[Scientists] have learned to respect nothing but evidence, and to believe that their highest duty lies in submitting to it however it may jar against their inclinations.