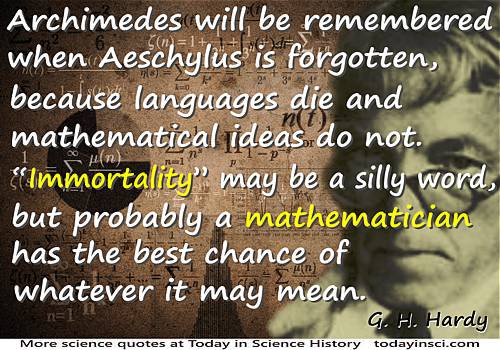 Archimedes will be remembered when Aeschylus is forgotten, because languages die and mathematical ideas do not. ãImmortalityã may be a silly word, but probably a mathematician has the best chance of whatever it may mean.

Early Greek astronomers, derived their first knowledge from the Egyptians, and these from the Chaldeans, among whom the science was studied, at a very early period. Their knowledge of astronomy, which gave their learned men the name of Magi, wise men, afterwards degenerated into astrology, or the art of consulting the position of the stars to foretel eventsãand hence sprung the silly occupation of sooth saying, for which the Chaldeans were noted to a proverb, in later ages.

If a man is in any sense a real mathematician, then it is a hundred to one that his mathematics will be far better than anything else he can do, and that it would be silly if he surrendered any decent opportunity of exercising his one talent in order to do undistinguished work in other fields. Such a sacrifice could be justified only by economic necessity of age.

Neutrinos, they are very small
They have no charge and have no mass
And do not interact at all.
The earth is just a silly ball
To them, through which they simply pass,Like dustmaids down a drafty hall
Or photons through a sheet of glass.
They snub the most exquisite gas,
Ignore the most substantial wall,
Cold-shoulder steel and sounding brass,
Insult the stallion in his stall,
And, scorning barriers of class,
Infiltrate you and me! Like tall
And painless guillotines, they fall
Down through our heads into the grass.
At night, they enter at Nepal
And pierce the lover and his lass
From underneath the bedãyou call
It wonderful; I call it crass.

In poem 'Cosmic Gall', The New Yorker (17 Dec 1960). Collected in Telephone Poles and Other Poems (1964), 5. Note: In fact, about 1014 neutrinos from the Sun and 103 neutrinos in cosmic rays pass through our bodies each second. Neutrinos are now known to have a very small amount of mass, and they do interact (through the weak force).

No part of Mathematics suffers more from the triviality of its initial presentation to beginners than the great subject of series. Two minor examples of series, namely arithmetic and geometric series, are considered; these examples are important because they are the simplest examples of an important general theory. But the general ideas are never disclosed; and thus the examples, which exemplify nothing, are reduced to silly trivialities. 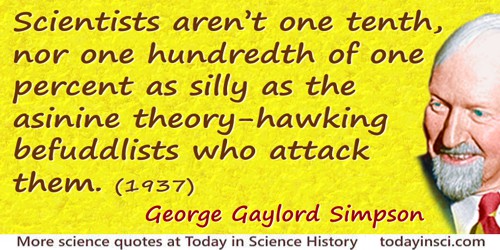 Scientists arenãt one tenth, nor one hundredth of one percent as silly as the asinine theory-hawking befuddlists who attack them.

The more success the quantum theory has, the sillier it looks.

There has come about a general public awareness that America is not automatically, and effortlessly, and unquestionably the leader of the world in science and technology. This comes as no surprise to those of us who have watched and tried to warn against the steady deterioration in the teaching of science and mathematics in the schools for the past quarter century. It comes as no surprise to those who have known of dozens of cases of scientists who have been hounded out of jobs by silly disloyalty charges, and kept out of all professional employment by widespread blacklisting practices.

This discovery, indeed, is almost of that kind which I call serendipity, a very expressive word, which as I have nothing better to tell you, I shall endeavour to explain to you: you will understand it better by the derivation than by the definition. I once read a silly fairy tale, called The Three Princes of Serendip: as their highnesses travelled, they were always making discoveries, by accidents and sagacity, of things which they were not in quest of: for instance, one of them discovered that a mule blind of the right eye had travelled the same road lately, because the grass was eaten only on the left side, where it was worse than on the rightãnow do you understand serendipity?

This theme of mutually invisible life at widely differing scales bears an important implication for the ãculture warsã that supposedly now envelop our universities and our intellectual discourse in general ... One side of this false dichotomy features the postmodern relativists who argue that all culturally bound modes of perception must be equally valid, and that no factual truth therefore exists. The other side includes the benighted, old-fashioned realists who insist that flies truly have two wings, and that Shakespeare really did mean what he thought he was saying. The principle of scaling provides a resolution for the false parts of this silly dichotomy. Facts are facts and cannot be denied by any rational being. (Often, facts are also not at all easy to determine or specifyãbut this question raises different issues for another time.) Facts, however, may also be highly scale dependentãand the perceptions of one world may have no validity or expression in the domain of another. The one-page map of Maine cannot recognize the separate boulders of Acadia, but both provide equally valid representations of a factual coastline.

We find it hard to believe that other peopleãs thoughts are as silly as our own, but they probably are.

The Mind in the Making

What can you conceive more silly and extravagant than to suppose a man racking his brains, and studying night and day how to fly? ... wearying himself with climbing upon every ascent, ... bruising himself with continual falls, and at last breaking his neck? And all this, from an imagination that it would be glorious to have the eyes of people looking up at him, and mighty happy to eat, and drink, and sleep, at the top of the highest trees in the kingdom.

In A Serious Call to a Devout and Holy Life (1732), 168. This was written before Montgolfier brothers, pioneer balloonists, were born.

[In an inventorãs life] Everything is stacked against you, but for some reason some silly chaps seem to be driven to it (rather like a painter of a composer of music), which is perhaps just as well or we should still be living in the Stone Age.