Judicial astrology, pretended to foretell the fates of nations and individuals. ŌĆ”Astrologer, One who pretends to foretell events, etc.

All material Things seem to have been composed of the hard and solid Particles ŌĆ” variously associated with the first Creation by the Counsel of an intelligent Agent. For it became him who created them to set them in order: and if he did so, it is unphilosophical to seek for any other Origin of the World, or to pretend that it might arise out of a Chaos by the mere Laws of Nature.

Doctor Thomas ŌĆ”
Said, ŌĆ£CancerŌĆÖs a funny thing.
Nobody knows what the cause is,
Though some pretend they do;
ItŌĆÖs like some hidden assassin
Waiting to strike at you.
Childless women get it.
And men when they retire;
ItŌĆÖs as if there had to be some outlet
For their foiled creative fire.ŌĆØ

I donŌĆÖt pretend to understand the universeŌĆōitŌĆÖs much bigger than I am.

Law springs from experiment, but not immediately. Experiment is individual, the law deduced from it is general; experiment is only approximate, the law is precise, or at least pretends to be. Experiment is made under conditions always complex, the enunciation of the law eliminates these complications. This is what is called ŌĆścorrecting the systematic errorsŌĆÖ.

Mathematicians pretend to count by means of a system supposed to satisfy the so-called Peano axioms. In fact, the piano has only 88 keys; hence, anyone counting with these axioms is soon played out.

In Mathematics Made Difficult (1971). As quoted in Michael Stueben and Diane Sandford, Twenty Years Before the Blackboard (1998), 131.

My mother, my dad and I left Cuba when I was two [January, 1959]. Castro had taken control by then, and life for many ordinary people had become very difficult. My dad had worked [as a personal bodyguard for the wife of Cuban president Batista], so he was a marked man. We moved to Miami, which is about as close to Cuba as you can get without being there. ItŌĆÖs a Cuba-centric society. I think a lot of Cubans moved to the US thinking everything would be perfect. Personally, I have to say that those early years were not particularly happy. A lot of people didnŌĆÖt want us around, and I can remember seeing signs that said: ŌĆ£No children. No pets. No Cubans.ŌĆØ Things were not made easier by the fact that Dad had begun working for the US government. At the time he couldnŌĆÖt really tell us what he was doing, because it was some sort of top-secret operation. He just said he wanted to fight against what was happening back at home. [EstefanŌĆÖs father was one of the many Cuban exiles taking part in the ill-fated, anti-Castro Bay of Pigs invasion to overthrow dictator Fidel Castro.] One night, Dad disappered. I think he was so worried about telling my mother he was going that he just left her a note. There were rumours something was happening back home, but we didnŌĆÖt really know where Dad had gone. It was a scary time for many Cubans. A lot of men were involvedŌĆölots of families were left without sons and fathers. By the time we found out what my dad had been doing, the attempted coup had taken place, on April 17, 1961. Intitially heŌĆÖd been training in Central America, but after the coup attempt he was captured and spent the next wo years as a political prisoner in Cuba. That was probably the worst time for my mother and me. Not knowing what was going to happen to Dad. I was only a kid, but I had worked out where my dad was. My mother was trying to keep it a secret, so she used to tell me Dad was on a farm. Of course, I thought that she didnŌĆÖt know what had really happened to him, so I used to keep up the pretence that Dad really was working on a farm. We used to do this whole pretending thing every day, trying to protect each other. Those two years had a terrible effect on my mother. She was very nervous, just going from church to church. Always carrying her rosary beads, praying her little heart out. She had her religion, and I had my music. Music was in our family. My mother was a singer, and on my fatherŌĆÖs side there was a violinist and a pianist. My grandmother was a poet.

The alternative to the Big Bang is not, in my opinion, the steady state; it is instead the more general theory of continuous creation. Continuous creation can occur in bursts and episodes. These mini-bangs can produce all the wonderful element-building that Fred Hoyle discovered and contributed to cosmology. This kind of element and galaxy formation can take place within an unbounded, non-expanding universe. It will also satisfy precisely the Friedmann solutions of general relativity. It can account very well for all the facts the Big Bang explainsŌĆöand also for those devastating, contradictory observations which the Big Bang must, at all costs, pretend are not there

The human mind needs nature in order to think most deeply. Pretending to be other creatures, children practise metaphor and empathy alike.

In 'Fifty Years On, the Silence of Rachel CarsonŌĆÖs Spring Consumes Us', The Guardian (25 Sep 2012),

The laws of conscience, which we pretend to be derived from nature, proceed from custom

The power that produced Man when the monkey was not up to the mark, can produce a higher creature than Man if Man does not come up to the mark. What it means is that if Man is to be saved, Man must save himself. There seems no compelling reason why he should be saved. He is by no means an ideal creature. At his present best many of his ways are so unpleasant that they are unmentionable in polite society, and so painful that he is compelled to pretend that pain is often a good. Nature holds no brief for the human experiment: it must stand or fall by its results. If Man will not serve, Nature will try another experiment.

Back to Methuselah: a Metabiological Pentateuch (1921), xvii. 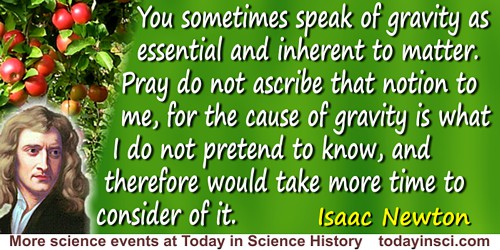 You sometimes speak of gravity as essential and inherent to matter. Pray do not ascribe that notion to me, for the cause of gravity is what I do not pretend to know, and therefore would take more time to consider of it.