Eventually the process of aging, which is unlikely to be simple, should be understandable. Hopefully some of its processes can be slowed down or avoided. In fact, in the next century, we shall have to tackle the question of the preferred form of death.

Few will deny that even in the first scientific instruction in mathematics the most rigorous method is to be given preference over all others. Especially will every teacher prefer a consistent proof to one which is based on fallacies or proceeds in a vicious circle, indeed it will be morally impossible for the teacher to present a proof of the latter kind consciously and thus in a sense deceive his pupils. Notwithstanding these objectionable so-called proofs, so far as the foundation and the development of the system is concerned, predominate in our textbooks to the present time. Perhaps it will be answered, that rigorous proof is found too difficult for the pupilŌĆÖs power of comprehension. Should this be anywhere the case,ŌĆöwhich would only indicate some defect in the plan or treatment of the whole,ŌĆöthe only remedy would be to merely state the theorem in a historic way, and forego a proof with the frank confession that no proof has been found which could be comprehended by the pupil; a remedy which is ever doubtful and should only be applied in the case of extreme necessity. But this remedy is to be preferred to a proof which is no proof, and is therefore either wholly unintelligible to the pupil, or deceives him with an appearance of knowledge which opens the door to all superficiality and lack of scientific method.

I am not ... asserting that humans are either genial or aggressive by inborn biological necessity. Obviously, both kindness and violence lie with in the bounds of our nature because we perpetrate both, in spades. I only advance a structural claim that social stability rules nearly all the time and must be based on an overwhelmingly predominant (but tragically ignored) frequency of genial acts, and that geniality is therefore our usual and preferred response nearly all the time ... The center of human nature is rooted in ten thousand ordinary acts of kindness that define our days.

I contend that the continued racial classification of Homo sapiens represents an outmoded approach to the general problem of differentiation within a species. In other words, I reject a racial classification of humans for the same reasons that I prefer not to divide into subspecies the prodigiously variable West Indian land snails that form the subject of my own research.

I should rejoice to see mathematics taught with that life and animation which the presence and example of her young and buoyant sister [natural and experimental science] could not fail to impart, short roads preferred to long ones.

From Presidential Address (1869) to the British Association, Exeter, Section A, collected in Collected Mathematical Papers of Lames Joseph Sylvester (1908), Vol. 2, 657.

If anyone could prove to me that Christ is outside the truth, and if the truth really did exclude Christ, I should prefer to stay with Christ and not with truth.

If I were not an atheist, I would believe in a God who would choose to save people on the basis of the totality of their lives and not the pattern of their words. I think he would prefer an honest and righteous atheist to a TV preacher whose every word is

In the year 1692, James Bernoulli, discussing the logarithmic spiral [or equiangular spiral, ρ = αθ] ŌĆ” shows that it reproduces itself in its evolute, its involute, and its caustics of both reflection and refraction, and then adds: ŌĆ£But since this marvellous spiral, by such a singular and wonderful peculiarity, pleases me so much that I can scarce be satisfied with thinking about it, I have thought that it might not be inelegantly used for a symbolic representation of various matters. For since it always produces a spiral similar to itself, indeed precisely the same spiral, however it may be involved or evolved, or reflected or refracted, it may be taken as an emblem of a progeny always in all things like the parent, simillima filia matri. Or, if it is not forbidden to compare a theorem of eternal truth to the mysteries of our faith, it may be taken as an emblem of the eternal generation of the Son, who as an image of the Father, emanating from him, as light from light, remains ὁμοούσιος with him, howsoever overshadowed. Or, if you prefer, since our spira mirabilis remains, amid all changes, most persistently itself, and exactly the same as ever, it may be used as a symbol, either of fortitude and constancy in adversity, or, of the human body, which after all its changes, even after death, will be restored to its exact and perfect self, so that, indeed, if the fashion of Archimedes were allowed in these days, I should gladly have my tombstone bear this spiral, with the motto, ŌĆśThough changed, I arise again exactly the same, Eadem numero mutata resurgo.ŌĆÖŌĆØ

In 'The Uses of Mathesis', Bibliotheca Sacra, Vol. 32, 516-516. [The Latin phrase ŌĆ£simillima filia matriŌĆØ roughly translates as ŌĆ£the daughter resembles the motherŌĆØ. ŌĆ£Spira mirabilisŌĆØ is Latin for ŌĆ£marvellous spiralŌĆØ. The Greek word (?┬Ą???s???) translates as ŌĆ£consubstantialŌĆØ, meaning of the same substance or essence (used especially of the three persons of the Trinity in Christian theology). ŌĆöWebmaster]

Men prefer to believe that they are degenerated angels, rather than elevated apes.

Most people prefer to carry out the kinds of experiments that allow the scientist to feel that he is in full control of the situation rather than surrendering himself to the situation, as one must in studying human beings as they actually live.

Much as I admired the elegance of physical theories, which at that time geology wholly lacked, I preferred a life in the woods to one in the laboratory.

Obviously we biologists should fit our methods to our materials. An interesting response to this challenge has been employed particularly by persons who have entered biology from the physical sciences or who are distressed by the variability in biology; they focus their research on inbred strains of genetically homogeneous laboratory animals from which, to the maximum extent possible, variability has been eliminated. These biologists have changed the nature of the biological system to fit their methods. Such a bold and forthright solution is admirable, but it is not for me. Before I became a professional biologist, I was a boy naturalist, and I prefer a contrasting approach; to change the method to fit the system. This approach requires that one employ procedures which allow direct scientific utilization of the successful long-term evolutionary experiments which are documented by the fascinating diversity and variability of the species of animals which occupy the earth. This is easy to say and hard to do.

In 'Scientific innovation and creativity: a zoologistŌĆÖs point of view', American Zoologist (1982), 22, 232. 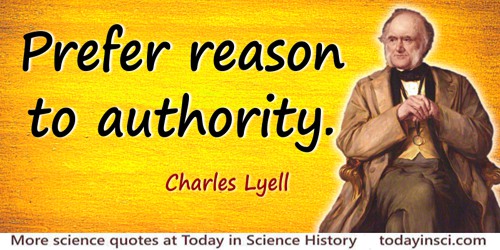 Given by author Thomas George Bonney as a maxim always guiding LyellŌĆÖs work. In Charles Lyell and Modern Geology (1895), 213.

Probably I am very naive, but I also think I prefer to remain so, at least for the time being and perhaps for the rest of my life.

Science is a dynamic undertaking directed to lowering the degree of the empiricism involved in solving problems; or, if you prefer, science is a process of fabricating a web of interconnected concepts and conceptual schemes arising from experiments and ob 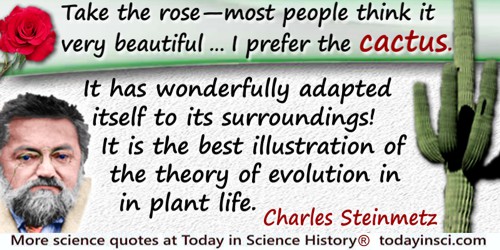 Take the roseŌĆömost people think it very beautiful: I donŌĆÖt care for it at all. I prefer the cactus, for the simple reason that it has a more interesting personality. It has wonderfully adapted itself to its surroundings! It is the best illustration of the theory of evolution in plant life.

The surgeon is a man of action. By temperament and by training he prefers to serve the sick by operating on them, and he inwardly commiserates with a patient so unfortunate as to have a disease not suited to surgical treatment. Young surgeons, busy mastering the technicalities of the art, are particularly alert to seize every legitimate opportunity to practice technical maneuvers, the more complicated the better.

The world in which we live is a hopeless case. I myself prefer to abide in abstractions that have nothing to do with reality.

They say that the best weapon is the one you never have to fire. I respectfully disagree. I prefer the weapon you only have to fire once. ThatŌĆÖs how Dad did it, thatŌĆÖs how America does it... and itŌĆÖs worked out pretty well so far. I present to you the newest in Stark IndustriesŌĆÖ Freedom line. Find an excuse to let one of these off the chain, and I personally guarantee, the bad guys wonŌĆÖt even wanna come out of their caves. Ladies and gentlemen, for your consideration... the Jericho.

This [Nobel Prize makes] a huge perturbation in my life [and] is not something which I have particularly liked ŌĆ” in many ways I would have much preferred not to have received it ŌĆ” it is well to remember that there is in general no correlation between the judgment of posterity and the judgment of contemporaries.

We all have a tendency to think that the world must conform to our prejudices. The opposite view involves some effort of thought, and most people would die sooner than thinkŌĆōin fact they do so.

In The ABC of Relativity (1925), 166. A paraphrase from this quote is often seen as, ŌĆ£Most people would rather die than think; many do.ŌĆØ

Why do they prefer to tell stories about the possible medicinal benefits of the Houston toad rather than to offer moral reasons for supporting the Endangered Species Act? That law is plainly ideological; it is hardly to be excused on economic grounds.

ŌĆ£If there are two theories, one simpler man the other, the simpler one is to be preferred.ŌĆØ At first sight this does not seem quite so bad, but a little thought shows that our tendency to prefer the simpler possibility is psychological rather than scientific. It is less trouble to think that way. Experience invariably shows that the more correct a theory becomes, the more complex does it seem. ŌĆ” So this ŌĆ” interpretation of [OckhamŌĆÖs Razor] is ŌĆ” worthless.